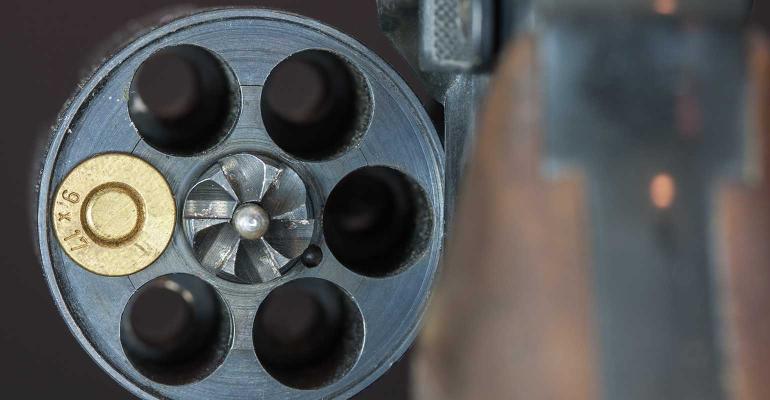 There's a reason Monte Carlo is synonymous with gambling.

Any professional financial advisor worthy of the title creates retirement income plans for their clients. They explain their methodology using terms like "Monte Carlo" and "Systematic Withdrawal Plans." One term they don't use, but maybe should, is "Russian Roulette," because that's what they are recommending.

Whenever the word "plan" is used to describe an income strategy, it means there is an inherent chance of failure. In this context, failure means running out of money. And with the typically recommended retirement income plan, there is up to a 20% chance of that happening, according to the Journal of Financial Planning. Compare that to Russian Roulette with a 16% failure rate based on six chambers.

The risk of failure gets introduced into an income plan as soon as withdrawals start coming out of principal. Retirement portfolios weighted in high-dividend stocks and other interest-bearing holdings might help investors dodge that bullet.

This is serious business because studies show that most people who are not retired are more afraid of running out of money than dying, according to an Allianz Life survey.

Traditional retirement plans have investors achieving income by withdrawing money from their portfolios or selling shares.

Most advisors use retirement withdrawal strategies built using the Monte Carlo Simulation, which analyzes the market performance of various 30-year periods and then determines the likelihood of exhausting retirement funds based on withdrawing a certain percentage of that portfolio each year.

When advisors execute a plan created with the Monte Carlo Simulation, investor portfolios may see a 10% to 20% chance of running out of money. That's considered an acceptable risk across the wealth management industry.

Along with Monte Carlo simulations, many advisors also use the 4% Rule, where retirees withdraw 4% of their portfolios' value in the first year and then increase the withdrawals annually to adjust for inflation.

It should be no surprise that inflation threatens the success of every investment philosophy. But inflation creates a multiplier risk to traditional investment methods because withdrawals will have to increase in tandem with higher cost-of-living expenses. If a retiree is using a withdrawal method with small increases over the years, I calculate that it doesn't take long until the chance of running out of money increases to 30% to 40%. That's a difficult level of risk for many investors to tolerate, especially during inflationary times like the one we are currently living through.

There are approaches that, although by no means risk free, look to help preserve and grow principal over time, while providing enough income to help fund retirement expenses. Instead of relying on withdrawal plans based on historical simulations, retirees may want to focus on generating recurring income through a diverse portfolio of fixed income and fixed income-like equity positions.

Bonds and income-producing stocks allow retirees to earn interest and dividends without withdrawing principal, which is really the only way for them to know that their retirement savings will last a lifetime.

Since most healthy companies raise their dividends, even during inflationary times, high dividend-paying stocks can function as a built-in inflation hedge in a portfolio. Bonds are also worth a closer look, as the Fed continues to raise interest rates to temper inflation. In this environment, bonds will produce a higher yield than traditional equities and retirees who reinvest their bond yields, instead of spending it, can create an organic inflation hedge.

A Sound Method for Retirement Income

No investment philosophy is foolproof or inflation-proof, but an approach that helps preserve principal during retirement has less risk than one that calls for withdrawing principal—especially if inflation threatens to curb spending power. If retirees can avoid dipping into principal until their late 70s or 80s, they will have a lower risk of depleting funds, while still being able to leave a legacy.

An income approach utilizing any kind of withdrawal method, including the Monte Carlo Simulation, with an inflation-adjusted 4% systematic withdrawal could have a retiree spending principal starting in their 60s. By the time they are in their late 70s or 80s, they may have already spent down a sizable amount of their principal. When costs rise from inflation, the remaining principal is going to disappear even faster. And that's like playing retirement Russian Roulette.

David Scranton is Founder and CEO of Sound Income Group.