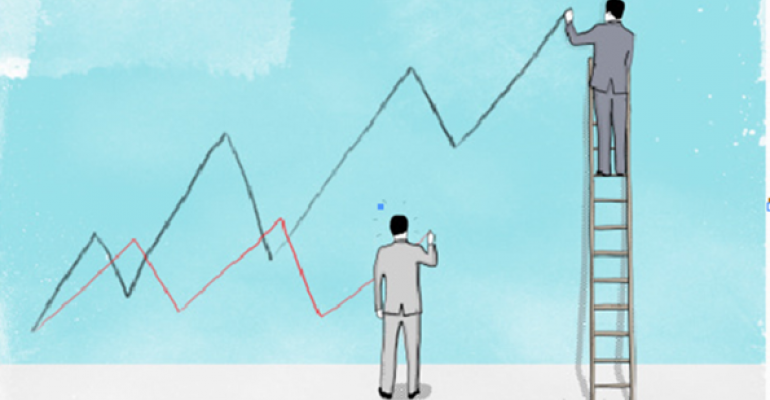 Research shows that clients are likely too optimistic about income growth in the latter part of their careers.

How much will your working clients’ income grow during the course of their careers, and how much of that growth can you safely bake into their financial plans? For successful people in the middle of their careers, should your assumptions keep pace with inflation or go higher?

For typical American households, the correct answer is “neither of the above.” Recent research shows that most income growth occurs early in working careers, and that income growth flattens out—or even declines in real terms—by the early fifties. The findings have important implications for financial planning models but also the assumptions clients should make about the lifestyles they will be able to afford in the future.

Researchers at the Federal Reserve Bank of New York looked at 200 million Social Security Administration earnings records from 1978 to 2010; they concluded that the average earnings peak for workers is 127 percent above what we earn at the beginning of our careers, but most of the growth takes place in the early years. Earnings level off at mid-career and tend to peak by the early fifties - and then drop off in the final 10 years before retirement. A study by the U.S. Department of Labor produced similar findings.

No one is average, of course—and the households that seek out the services of financial planners tend to be more affluent and enjoy more dynamic income growth. But these studies do point to some key issues for planners to consider and discuss with clients, says Michael Kitces, partner and director of research for Maryland-based Pinnacle Advisory Group.

For younger clients, the message isn’t simply to cut spending, but to keep an eye on “lifestyle creep.”

“Some expenses just ramp up as people are raising children and sending them to college,” he says. “But then people get themselves in trouble because they think they need a larger vehicle to haul the kids around, but buy a $62,000 luxury SUV instead of a minivan. They have the illusion that the big pay increases will never stop.”

Housing is another area where lifestyle creep can get sticky, he says. “If the mortgage lenders say I can qualify for a $500,000 mortgage, I may think that’s what I can afford—but the lenders are going to determine that threshold by the maximum pain I can endure and still make my payment. It’s not determined to optimize my happiness or financial well-being, but how much they can get out of me. If I buy too much house, I’m setting myself up for an unhappy experience.”

For clients closer to retirement, lifestyle creep may have already occurred. But if they’re empty nesters, “you can get a second crack at helping them make some adjustments,” Kitces says.

“The kids’ tuition and other expenses diminish, so that money could go to saving,” Kitces says. “We don’t spend enough time as a profession talking about empty nesters and what they could do with their newfound cash flow. There’s a nice opportunity to play catch-up on retirement saving if you can convince clients not to spend it all on vacations. Will you downsize your house? Can we free up some money up to reallocate to retirement?”

For planners, discussions about spending can be touchy and are often avoided, Kitces says. “Spending decisions are very personal and emotional, and it’s difficult to give advice without sounding obnoxious or preachy, even though clients may need to hear it.”

It’s also difficult to get a handle on exactly where client spending is going, although that challenge may ease as personal financial management tools improve and advisors start to bring them into their work with clients. Harbingers of this trend are Fidelity Investments’ acquisition earlier this year of eMoney Advisor, and Envestnet’s acquisition of Yodlee.

For clients nearing retirement, advisors also should weigh the strong possibility that spending won’t move in a straight upward line in the out years of the plan. A 2013 paper by David Blanchett, head of retirement research at Morningstar, found that actual needed income replacement rates vary from under 54 percent to over 87 percent.

Blanchett's key finding is that spending actually falls over the course of retirement. Wealthier households in particular have more discretionary preretirement spending and therefore more flexibility in retirement to cut back if funds aren't available. This is especially true as people reach advanced ages when their interest and ability to spend on travel, entertainment and clothes declines.

Using that formula, “instead of the usual starting income replacement number plus inflation, you get a very different forecast—spending could be 20 percent lower than you think,” he says.

Healthcare expenses may be the exception that proves Blanchett’s rule. Health accounts for 13 percent of expenditures by Americans over age 65, compared with five percent for all other age groups, according to the Center for Retirement Research at Boston College.

That spending falls into two categories: predictable outlays for health insurance premiums, and spikes for catastrophic events such as a nursing-home stay. Blanchett argues that the spending spikes tend to be offset by declines in other discretionary categories. “If you’re not well, you aren’t spending on vacations or dining out,” he says.

The outlook for the regular outlays (mainly insurance premiums) is less clear. The latest projections from Medicare’s trustees point to renewed upward pressure on premiums in the years ahead.

“You read all these reports saying that couples will need $250,000 for health-care spending in retirement,” Blanchett says. “Certainly it’s one portion of the overall retirement budget, but right now it’s difficult to say exactly what will happen.”