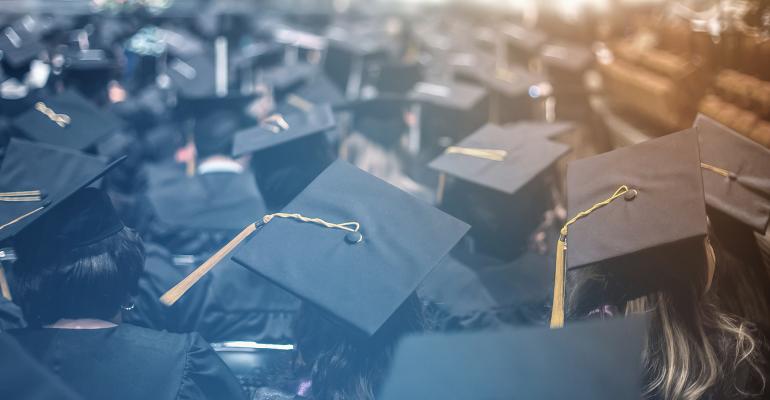 How to Save for Retirement by Paying Down Student Loans

A new provision will allow more employers to make retirement-fund contributions for workers who pay down their student loans.

(Bloomberg) -- Paying down student debt or saving for retirement can seem like mutually exclusive goals. A little-known workplace benefit could soon allow more workers to do both.

A provision of the omnibus spending bill signed by President Joe Biden in December formally allows employers to extend their 401(k) match programs to include any payments an employee makes toward student debt. It will go into effect in January 2024. The matches function much the same way traditional 401(k) programs do, with the company depositing its contribution into the worker’s retirement account.

The rule change comes amid serious doubts about the Biden administration’s debt relief program, which aims to forgive up to $20,000 in federal loans per borrower and is currently on hold as the Supreme Court prepares to hear two Republican-led challenges. Even if it proceeds, the one-time forgiveness won’t wipe out Americans’ $1.8 trillion student debt balance, and employers looking to attract and retain young and diverse talent might use such 401(k) matching to stand out from the competition.

Read More: If You Have Student Loans, Mark These Dates on Your Calendar

In an October survey by the nonprofit Employee Benefit Research Institute, 25% of employers said they currently offer student debt repayment assistance as a benefit. Of those, nearly half offer a 401(k) match contribution tied to student-debt payments.

Medical-technology company Abbott Laboratories was an early adopter of the idea, receiving approval in 2018 from the Internal Revenue Service for its program, called Freedom 2 Save. Under it, employees who direct at least 2% of their pay to their student debt receive a 5% match in their 401(k) account.

Some 2,200 employees have signed up for the program since it was introduced four and a half years ago, said Mary Moreland, the company’s executive vice president of human resources. The program can particularly help recent college graduates, as well as minority and female employees, she said. Black and Latino student loan borrowers hold more student debt than their White counterparts for longer, while women hold an estimated two-thirds of total federal student debt.

Moreland said she’s heard from new hires that the benefit was a particular factor in their decision to join the company. The average monthly enrollment in the program in 2021 was 50% higher than it was in 2019.

Mackenzie Tannhauser, a field clinical specialist at Abbott, graduated with $60,000 in student debt in 2016. She’s since paid off about two-thirds of that debt, and has prioritized paying down her private loans as much as she can while the Covid-era repayment moratorium on federal loans is still in place. She enrolled in the Freedom 2 Save program when she joined Abbott two years ago.

The program “helped me be a lot more aggressive with those student loan payments,” she said.

Borrowers across the country are currently bracing for student debt payments to resume after a Supreme Court decision is handed down, which will likely happen by June. Debtors will need to resume payments no later than the end of August — for many, it will be the first time they’ve had to do so in more than three years.

Scott Thompson, chief executive officer of Tuition.io, an education-assistance platform, said 401(k) match programs can be beneficial, but are ultimately dependent on whether employees have the funds to make payments.

“The reality is it’s not going to solve the challenges associated with repaying their student loans,” he said.

To contact the author of this story:
Ella Ceron in New York at [email protected]