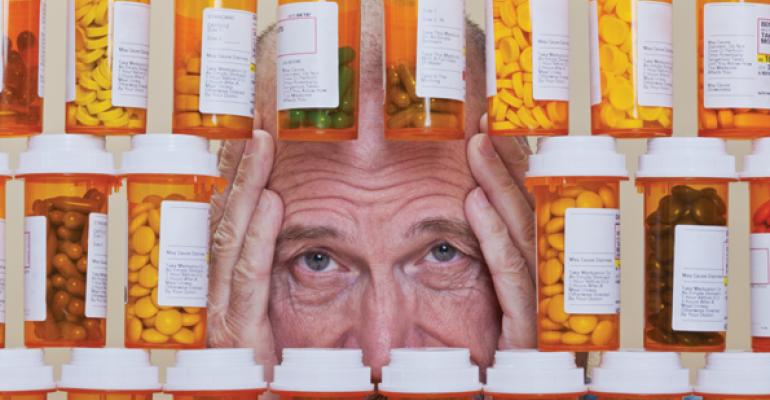 How to Hack Medicare Costs, With a Retirement Guru's Help

(Bloomberg) -- Philip Moeller is that rare person who gets two streams of income from Social Security. Like millions of other older Americans, he gets a monthly benefit. But he also gets an additional income stream from the unlikely bestseller he co-authored, Get What's Yours: The Secrets to Maxing Out Your Social Security.

That book's runaway success—it spent 25 weeks on the New York Times bestseller list—got Moeller, 70, thinking about another complex and crucial government safety-net program: Medicare. His new book, Get What's Yours for Medicare: Maximize Your Coverage, Minimize Your Costs, comes out on Tuesday.

Bloomberg spoke with Moeller about how to get the most out of your Medicare dollars, and why it's smart for even very affluent Americans to enroll. The interview was lightly edited for space and clarity.

Q. Is Social Security, the book, going to make you rich?

A. If I live a really long time, that might be true. The book is an annuity that I hope will pay a modest return for a very long number of years.

I waited to claim Social Security until I was 70, and my benefits are going to be really nice for the rest of of my life. My wife will do the same thing. She's 66 but got grandfathered in the new law that ended the ability to use a strategy called "file and suspend" that we wrote about in the book. [One of Moeller's co-authors, Boston University economist Larry Kotlikoff, estimated that the strategy could add $50,000 to a couple's lifetime benefits.] Larry was told by people within Social Security that the book was responsible for changing the law about the claiming technique, which we're not terribly proud of.

Q. You'd think affluent people wouldn't use Medicare, since they have better options and the money to get health care outside the program. Is that true?

A. Smart, affluent people should absolutely use Medicare as a vehicle to protect assets. Heath-care expenses are the biggest uncontrolled expense that most older Americans have in their lives. The average lifetime out-of-pocket for an average American is about $250,000—but that is an average. Having a lot of money skews that average, because wealthier people invariably spend more on health care, because they can afford it and have higher out-of-pocket expenses.

I have a good friend who became very wealthy and retired in his early fifties. For the last 20 years, he's lived a wonderful, affluent lifestyle. He can afford to self-insure his health care, but he doesn't. He has Medicare, because it saves him a tremendous amount of money. Until recently, he didn't have a Medicare Part D drug plan because he didn't take any expensive medications, so figured he didn't need it. He's now recognized that the drug coverage is a wonderful catastrophic insurance policy against these very wonderful but very expensive new medications that odds are more and more of us will need to take when we get old.

He signed up for Part D but was five years late in enrolling, so has to pay like a 50 percent premium penalty for the rest of his life. That's the nature of Medicare penalties when you're late in enrolling.

Q. Let's take an example of an older married couple, in their early sixties, on employer-sponsored health care insurance. How should they be thinking about Medicare?

A. First, make sure you understand when to sign up, so you avoid late-enrollment penalties. They are horrible and can be very damaging, and they last literally forever. Another reason why it's important to sign up on time is that you don't want to find yourself without coverage because you're late in enrolling. That's the more serious consequence. If, for example, you turn 65 and you're slow in signing up for Medicare, and your employer's policy ends your coverage and you have an adverse health event and no primary health insurance, you are in a world of hurt.

The traditional enrollment window for someone turning 65 is that you can enroll three months before your birthday month and three months after. But if your insurance with an employer ends during your birthday month (say, September) because you retire, it doesn't do you much good to wait to enroll until November—because you may avoid the late enrollment penalty, but if you get hit by a car you don't have any insurance. Your Medicare coverage will start on Jan. 1, in this example, and you will have a gap between coverage. Don't get too enamored of saving a dollar here or there by deferring enrollment until late in the enrollment period.

Also, there's no family plan with Medicare. A lot of couples get the same Medicare policies, even some otherwise very intelligent friends of mine. Life is easier when it's simpler. But it doesn't make sense unless their health profiles are identical.

Q. What advice do you have for people who want to buy additional insurance to cover some of what Medicare doesn't?

A. When you sign up for Medicare, most people buy Part A, which covers hospital stays, and Part B, which covers doctors, outpatient and medical equipment expenses, and then decide on additional products.

Usually you need a Part D drug plan, and then there are two products—Medigap (or Medicare supplemental insurance, as it's also called) and Medicare Advantage plans. They are sold by private insurers and cover many of the expenses that basic or original Medicare does not. You buy one or the other. It's illegal for insurance companies to sell both of these to the same person, because they cover a lot of the same things.

Medicare Advantage also comes with Plan D rolled in. These are usually easier to use, because you have one insurance product you deal with for all your Medicare needs. But Medicare Advantage plans make their money by restricting policyholders' access to care by requiring them to use caregivers in the plan's provider networks. (I joke in the book that the letters HMO still cause shudders in marketing circles, but these plans are basically HMOs. Some are very good, though; Kaiser Permanente's plans have a great reputation.) Most affluent people don't take that route, because they want to use whatever health-care providers they need to take care of themselves and their loved ones. That's what you can do with basic Medicare. If you use Parts A and B, you can use whatever health-care provider in the U.S. works with Medicare, and almost all of them do. So wherever you are in the U.S., you can get health-care services. If you are traveling and you need a prescription, you can go into the local pharmacy and Medicare will fill it. That's often not the case with Medicare Advantage plans.

Q. What are other big trade-offs? A. Traditional Medicare has great flexibility but large coverage gaps. Plan B pays only 80 percent of covered expenses. You pay 20 percent, and there's no annual ceiling. You can largely close that big hole by buying a Medigap plan. There are 10 different so-called letter plans that you can buy.

A. With Medigap, the policies are regulated by the states, but what they cover is dictated by Medicare. The most popular Medigap plan is F, which covers the most, and the C plan is second. If you have F, regardless of where you are in U.S., every F plan has to cover same thing, because federal rules dictate what that plan and all the other letter plans cover.

The only real variation in Medigap plans is the premium—and there is an enormous range.

The more we write about the premiums, hopefully the smaller the range will be. But if you don’t shop for a plan, you are leaving money on the table in most cases. Fortunately, there's a tool on Medicare’s website that helps you shop for Medigap plans.

Insurance companies would argue that the quality of customer service is a differentiator in terms of plans. I think that is a nice-sounding phrase. I’d shop based on premium, and that should be almost all the due diligence people need to do. I would look for a community-rated plan with the lowest premium.

Q. Affluent people can also get hit with big surcharges. What's the situation there? A. There's something called IRMAA, which stands for "income-related monthly adjustment amount." Wealthier individuals have to pay higher percentages of their Medicare expenses for Part B and D policies.

A. If you earned more than $124,000 this year—and that's modified adjusted gross income, or MAGI—the Part B surcharge can be really stiff. If "normal" people pay $105 a month for Part B, the highest-earning individuals in the U.S. pay nearly $390 a month, or quadruple.Another important thing is that IRMAA is based on your tax returns for two years ago , and IRMAA can be influenced by one-time events. If you sell a vacation home that has no lifetime gain exclusion, for example, you got a slug of one-time income—and it will play havoc with your IRMAA surcharge. If you have a financial adviser, they should be factoring in this time element, in terms of how they plan for your Medicare premium.

Q. What plan do you use?

Q. There was legislation passed last year that changed Letter F and C plans. How does that affect people?

A. These plans are the only two Medigap plans that provide first-dollar coverage of Part B deductibles. That deductible is now about $166 and may rise above $200 next year, because health-care expenses are going up. Congress decided that people needed more skin in the game and that those two plans discouraged people from taking proper responsibility for their health-care spending needs.

As of 2018, newly sold Part F and C plans will no longer provide first-dollar coverage for Part B deductibles. If you already have a Part C or F plan, or buy one in the next couple of years, you're grandfathered, and your plan will continue to cover this deductible.

The rub: If you look at risk pools in insurance in terms of how companies determine rates, if no one buys F and C plans as new insurance products in 2018, the pool of people with those plans is going to tend to skew older and sicker over time. So if you have one of those plans, it may become increasingly less attractive.

Another tough issue is that when you switch Medigap plans, you do not necessarily have the same guaranteed rights of coverage that you did when you first signed on. It can be hard to replace a policy at as attractive rates as when you bought it. So if you’re sailing along and then your F plan rate gets jacked up, there’s not an easy fix.