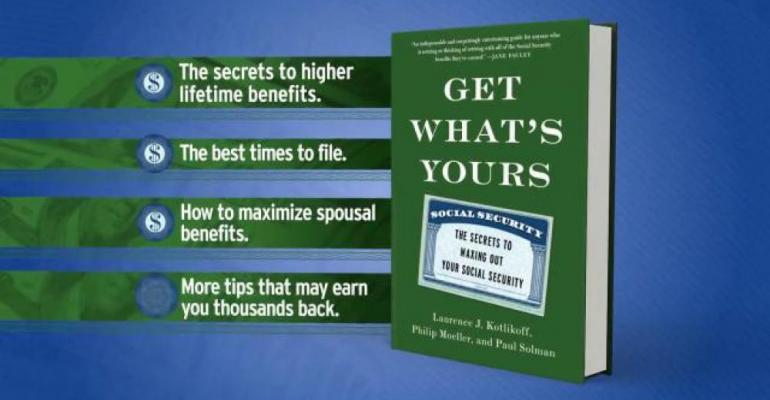 How a Bestseller Helped Change the Rules of Retirement

Would anyone want to read it? Simon & Schuster wasn’t sure, and initially printed just 10,000 copies of Get What’s Yours: The Secrets to Maxing Out Your Social Security, by Laurence Kotlikoff, Philip Moeller, and Paul Solman.

It was a big success. Maybe too big.

There are now more than 300,000 copies in print, making it one of the best-selling business books of 2015. Inside a bold green cover, Get What’s Yours explained the many ways retirees could squeeze more out of Social Security. The authors’ basic advice was patience. Social Security rewards Americans who wait as long as possible to claim their benefits. By claiming at age 70 rather than at 62, retirees can boost their inflation-adjusted income by 76 percent.

But the book also explained some obscure strategies that even many Social Security employees weren’t aware of. One, called “file and suspend,” let Americans receive spousal benefits, based on their husband's or wife’s work history, without tapping their own benefits early. Another let retirees change their minds about when to file. They could delay taking their benefits and then, if they got sick or had an emergency, get their past benefits paid in a lump sum.

For better or worse, Washington policymakers were apparently among the many readers of Get What’s Yours. In a budget deal reached in October, Congress killed the file-and-suspend and lump-sum options, calling them unintended loopholes. Kotlikoff, an economics professor at Boston University, says he’s been told by senior officials at the Social Security Administration that his book was the catalyst.

“That doesn’t make me feel happy or proud,” he said in an interview. While some could argue file-and-suspend allowed a kind of double-dipping, Kotlikoff says the provisions were changed with no hearings, no public debate, and no sign that the legislation's drafters had considered the full consequences.

Initially, the bill would have cut off benefits from current users of the file-and-suspend strategy. That was changed at the last minute after Kotlikoff and others loudly complained. The law still cuts off retirees in their early to mid-60s who had been planning on those strategies but are now, just barely, too young to qualify.

“You don’t pull the rug out from people,” Kotlikoff said. “It’s just unfair.”

When President Barack Obama signed the legislation, on Nov. 2, it set off a scramble by Kotlikoff and his co-authors. Using the book’s website and Kotlikoff’s online column, they got the word out that certain Americans had one last chance to take advantage of the expiring provisions. The deadline for contacting the Social Security Administration is the end of the month, and Kotlikoff advises doing so online by Friday.

And they realized their book needed to be updated as soon as possible.

“We felt bad after the changes, because the book was not correct,” said co-author Moeller. Simon & Schuster, a unit of CBS Corp., could put out a new edition as early as May, but only if they wrote quickly. “We were burning the candles at both ends for a while,” Moeller said.

“The three of us almost killed each other,” Kotlikoff said.

Much of the new book, which comes out May 3, needed a total rewrite. By changing a few of Social Security’s 2,728 core rules, Congress had changed the calculus for millions of retirees.

“The system is beyond belief in terms of complexity,” said Kotlikoff, 65, who has also designed software, on sale for $40, that helps retirees game out all their filing options and maximize their checks. “It may be the most complex set of rules every devised by man.”

For example, Social Security benefits based on your own work history differ from those based on your spouse's—or former spouse's. (Yes, divorced people can claim spousal benefits, as long as they were married for at least 10 years.) For single people who have never married, it has generally been a no-brainer to wait until 70 to claim benefits. That is now true for many married people, too. But those who are divorced or widowed can often start getting a spousal benefit earlier—at full retirement age, currently 66—while still getting their maximum benefit checks later.

Writing the first edition, Moeller said, he kept arguing with Kotlikoff, trying to tone down the book’s criticisms of the Social Security Administration. Then, after the book became a bestseller, the authors were “inundated from consumers who got bad advice from Social Security,” he said. Kotlikoff said one reader got the wrong information so often, from eight consecutive employees, both over the phone and in her local office, that Kotlikoff called a supervisor.

In the second edition, the gloves came off. When dealing with Social Security, Moeller said, “if you don’t think you’re not being told the right thing, you might be right.”

“We do not believe there is widespread misinformation being disseminated to the public,” said William Jarrett, a spokesman for SSA. The agency has been training employees nationwide on file-and-suspend and other options that end this month, he said.

One silver lining to the rule changes is that they make the maddeningly complex Social Security system slightly simpler. But, the new book points out, the rules also have unexpected consequences—that married people now have fewer claiming options than divorced and widowed people, for example. In some cases, it may be in a couple’s best interests—well, their best financial interests—to divorce, collect spousal benefits for a few years, and then remarry.

The new book includes a new chapter on Medicare, a preview to a companion book by Moeller on how to maximize your benefits under that federal health insurance program, which has its own complexities.

Despite the many changes, the revised book’s basic thesis is the same: Retirees should be at least as scared of outliving their money as they are of dying young.

“Most people think they’ll jinx themselves if they think about living too long,” Kotlikoff said. "The real risk is living to age 100 and living on cat food."

So, to top off your retirement portfolio, do everything you can to maximize your Social Security check, even if it means waiting until you're 70, making some complicated calculations, and arguing with a few SSA employees along the way.