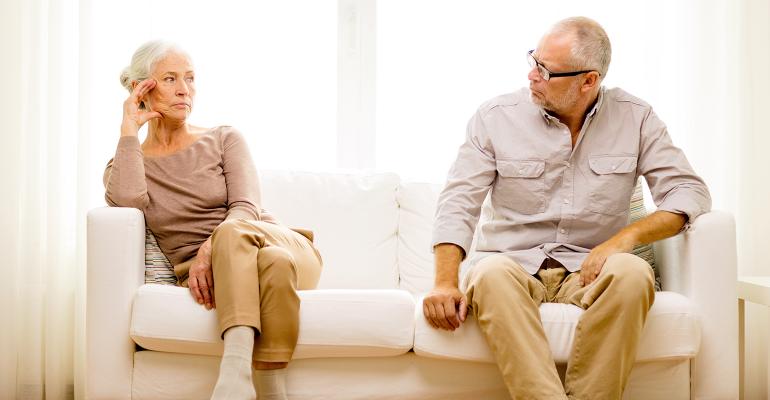 The biggest direct impact is on alimony, which will no longer be a deduction for the person paying it, and no longer have to be claimed as income by the person receiving it.

NEW YORK (Reuters) - When people over the age of 50 get divorced, retirement accounts become a key asset, even more so sometimes than the house or alimony. Lawyers and feuding couples are bracing for big changes at the end of 2018 for how these assets get split up.

While most of the tax law changes that were signed at the end of 2017 are in effect for the current tax year, the divorce disruption does not kick in until Jan. 1, 2019. The biggest direct impact is on alimony, which will no longer be a deduction for the person paying it, and no longer have to be claimed as income by the person receiving it.

Divorce attorney Malcolm Taub, of Davidoff Hutcher & Citron in New York, said this change is not actually driving the kind of rush to settle that experts had expected.

“It is a drastic change, but it seems like people are living with it,” said Taub.

It turns out that the negotiations over the actual dollar value of alimony are the easy part. What is coming to matter more is where the money for the settlement is coming from, and how well-prepared each side is for the long-term.

Divorce settlements for those over 50 are complicated because of the working years left for both parties.

Lawyers like Taub still see many traditional gender breakdowns in that demographic; male breadwinner, wife who stayed at home to raise kids. Even among high-net worth clients, the two biggest assets are usually the house and the retirement accounts.

While there is always a sentimental attachment to the family home, you have to do the math.

“If the house is saddled with debt, you have to ask, can the spouse fund the expenses?” said Marilyn Chinitz, a divorce attorney at Blank Rome based in New York.

What Chinitz often advises is that the spouse who gets the house turn around and sell it, putting the proceeds into an investment account for retirement.

Chinitz also makes sure that if there is a split of the sort where one side gets the house and the other side gets what seems like an equivalent amount in an investment or retirement account, that the taxes be figured into the equation.

Another one to look out for: IRA or 401(k) assets versus Roth assets. If you have $20,000 in each account, they are not equal because of the tax treatment of distributions - the Roth is worth more because the taxes have already been paid.

Key after this tax year will be the valuation of private businesses, because the tax changes gave out corporate breaks. But higher cash flow might not be known until the following year. Even if you are not selling a business, you still need to assess its value in a divorce.

Especially in the case of pensions, Chinitz cautioned to have a proper legal order for any asset distributions, because the tax penalties could be enormous.

“High-net worth clients are going to have attorneys and forensic accountants. That’s not the case for the rest of America,” Chinitz said.

Sometimes the nest egg of their divorce settlement is not enough to get by, especially for those who do not yet qualify for Medicare and Social Security.

Haleh Moddasser, a certified public accountant and senior advisor at Stearns Financial Group, has one client who got more than $1 million in a lump settlement after her divorce. But even with a little alimony, the 50-something did not have enough disposable income to pay $800 for an independent health insurance policy.

The woman took a job as a barista at a coffee shop to get covered.

“What do you do when the nest egg is gone? If you can’t save, and alimony stops? Most people will be living check to check on a fixed income,” said Moddasser.