/sites/all/themes/penton_subtheme_wealthmanagement/images/logos/footer.png
Recent
Recent
Digital Transformation: What Does it Mean for RIAs?
May 18, 2021
U.S. Bankruptcy Tracker: Filings Slide to Zero as Pandemic Eases
May 18, 2021
WeWork Chairman Says Demand Exceeds Pre-Pandemic Levels
May 18, 2021
Seven Must Reads for the CRE Industry Today (May 18, 2021)
May 17, 2021
Featured
Poll: 15 Classic Books on Investing and the Markets
Apr 03, 2020
Fifteen Must-Listen Business Podcasts for Advisors
Aug 14, 2020
25 U.S. Markets Adding the Most Multifamily Units This Year
Feb 03, 2021
The Top Colleges for Financial Planning
Oct 03, 2019 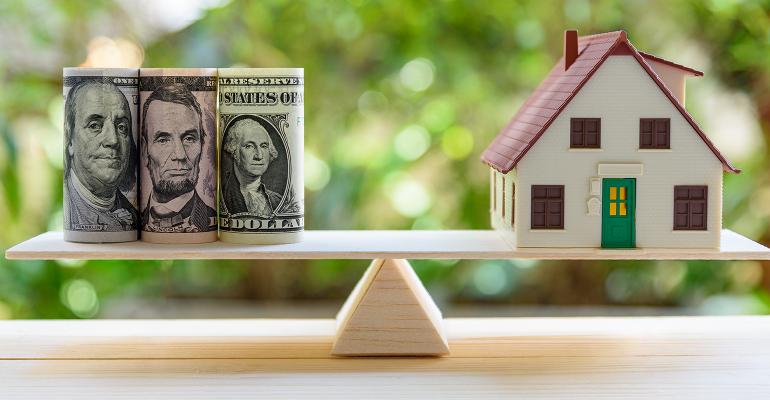 Four Questions to Ask Clients Before Retiring Their Mortgage

A seemingly sensible strategy might not be so smart.

Many of your retired middle-class millionaire clients are tempted to pay off their mortgages as soon as possible, hoping to cut their monthly expenses and save big on interest costs. But before you agree to this move, you should pose these questions to see if it makes financial sense.

Where Will You Get the Money?

Often these types of clients have the bulk of their investments in tax-sheltered retirement accounts, like IRAs. Big one-time withdrawals from these accounts can have huge tax consequences especially when the withdrawals are added to fixed income like Social Security or pension payments.

For instance, say a married, retired couple has $40,000 per year in Social Security income, plus another $2,000 per month withdrawn from their IRAs to help cover basic expenses. They would like to withdraw an additional lump sum from their IRAs to pay off $200,000 that they owe on a 3.5 percent mortgage that has 25 years left. According to the HR Block tax calculator, if they don’t pay off the mortgage and take the standard deduction, in 2018, their federal income tax bill would be about $340 (with no other income or deductions). But if they want to retire the $200,000 mortgage with money pulled from an IRA, they would have to withdraw about $280,000 in gross funds from the IRA, with $80,000 or so going to pay the extra federal income taxes triggered by the withdrawal. That $80,000 in additional taxes equals roughly the next 16 years’ worth of interest that they would otherwise pay on the mortgage if they just continued to make the minimum monthly payment.

Even if the clients have money in accounts that won’t trigger a large tax bill on withdrawal (such as jointly-owned investments or Roth IRAs), if they exhaust those accounts they won’t have that tax-favored source of funds if another large sum is needed in the future.

Where Would the Money Be Otherwise?

It’s understandable for both clients and advisors to look back at recent stock market investment performance, and expect (hope) to earn future returns that far exceed the low interest cost of the mortgage. That would be an incorrect assumption, as the future returns may not only be lower than they’ve been in the past, but they could even be negative.

Instead, the only investments that can reasonably be weighed against the interest cost of the mortgage are those that have the same predictability of the mortgage: certificates of deposit held directly at banks or credit unions, and that have a fixed, low-cost penalty for early withdrawal. But using these safe investments in the mortgage decision process doesn’t necessarily increase the appeal of paying off a mortgage. Many institutions now offer longer-term CDs that pay well over 3 percent, with some reaching closer to 4 percent annual yields.

True, even these CDs aren’t perfect matches for the mortgage comparison, as a decline interest rates means that if the CDs mature before the mortgage ends, clients could be stuck earning a lower rate of interest when they renew the maturing CD. But the rates could of course be even higher in the future, which will then make clients even more relieved that they didn’t pay off their low fixed-rate mortgage any faster than required. And, as the mortgage balance declines and the investment portfolio increases, it won’t take long before the investments will earn more dollars per year than the mortgage is costing.

Using the example above, compare the $200,000, 3.5 percent mortgage with 25 years left to a deposit of $200,000 earning a compounding hypothetical annual rate of return of just 2 percent. In the first full year of comparison, the mortgage will cost about $7,000 while the investments will only earn about $4,000. Yet in about 10 years, the interest cost of the mortgage in dollars will equal the dollars earned by the investments, and for the next 15 years even more so.

Can You Deduct the Interest?

The net cost of the mortgage interest can be further reduced if the clients can use it as a tax deduction. But that’s not always the case, especially after the 2017 Tax Cuts and Jobs Act.

Beginning in 2018, the standard deduction is $12,000 for singles and $24,000 for married couples filing jointly. If the taxpayers are over 65, those amounts are $1,600 higher for singles and $1,300 higher for married couples. When taking these increased amounts into consideration, along with the previous reduction or loss of expenses that were fully deductible, it means that clients are more likely to just take the standard deduction, rendering the mortgage interest deduction useless.

Keep in mind that just because the clients can (or can’t) use the mortgage interest now, it doesn’t mean that they will (or won’t) be able to do so in the future, depending on changes to their situation and the tax laws.

Can You Get a HELOC?

If clients are still determined to pay off the mortgage, they should realize that they will be reducing the “liquid” portion of their net worth, and increasing the “illiquid” component. They can mostly mitigate this problem by opening up a home equity line of credit, or HELOC. Once established, the HELOC will allow clients to get access to most of their home equity, without having to go through the cost and hassle of applying for a new loan. The HELOC should be for as much as the lender will allow, and the clients shouldn’t balk if it costs a nominal amount to open the HELOC, or to keep it open via an annual fee. The clients only pay interest on what they borrow, and usually only the interest, at least initially. The HELOC can be used to pay for purchases or emergencies when cash or other borrowing options aren’t available. The HELOC can also be tapped if the interest cost would be lower than the tax bill, which would be incurred if money were instead taken from IRAs, annuities or the sales proceeds of appreciated assets.