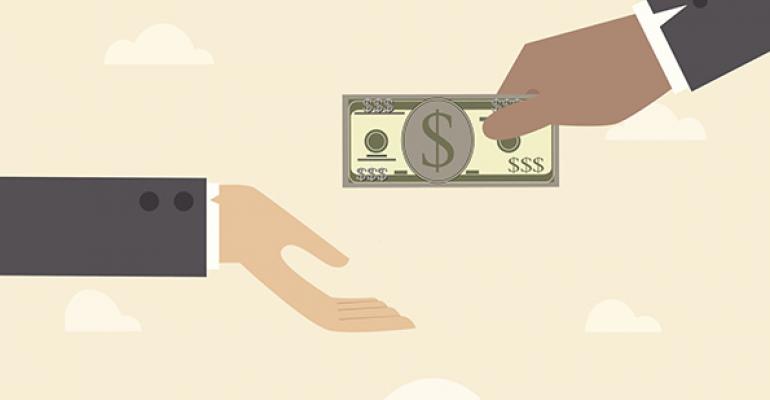 One driver: plan sponsors ensuring they are fulfilling their fiduciary duty to participants who may grumble—and sue—if their fees are considered excessive. Alternatively, a vendor trying to gain market share might submit a bid below cost. The impact is continuous competitive pricing pressure for 401(k) and other retirement plans, he says. Desmond cites the example of a plan currently paying 17 basis points that was approached by a firm offering its services at 12. If the incumbent consultant wants to retain the business, it might make an 11 basis points counteroffer.

Compensation methods have been changing too. Kelly Amato, director of retirement plans at NFP, says that she rarely sees plans paying consultants by the hour or with an upfront retainer because the nature of the work usually doesn’t fit those methods. “We’re really not trying to fix issues like an attorney would or a doctor would,” she says. Hourly rates “don’t work well unless you’re engaged to fix a particular plan defect like failure to file 5500s or failure to transmit timely payrolls with participant deferrals. Unless there’s something wrong at the outset, we don’t typically see an hourly or retainer agreement in place.”

Amato says her firm is typically compensated with flat fees paid by the sponsor. A percentage of assets is the second-most prevalent fee type in the market, she says, but that arrangement often is suboptimal. From the consultant’s perspective, market corrections mean lower fees. Similarly, fees decline when participants with large account balances leave. “But neither of those scenarios means a commensurate decrease in the amount of service we’re delivering,” she says. “In fact, those requirements go up in those instances because we have to do additional participant counseling and enrollment.”

Project fees are also used, but Amato says they are not as efficient as flat fees. They are nonrecurring and bring a risk the consultant will not remain “engaged in the ongoing processes and controls” of the plan, and weaken the quality of the consulting, she says. Project fees also mean consultants aren’t sure of the timing or source of future revenue.

One consequence of 408(b)(2) notices is that participants have a much clearer picture of the fees they’re paying. Amato points out that the largest account holders, who are probably the company’s key employees, ultimately pay the largest pro rata share of those fees. Consequently, she says, they are beginning to ask what vendors are doing for the money, because they often don’t see the vendors at all.

Agreeing on an annual service plan in advance can head off those questions. “With our service structure, we map that out in advance of the year,” she explains. “It’s very easy to determine where we are in the process (and) how many hours we’ve logged on each item. We also dissect that fee structure for the client at every quarterly meeting when we’re reviewing investments (and) doing the other required activity on the plan to monitor and maintain reasonableness.”

Desmond believes consultants can respond to fee compression on two fronts. First, they need to keep showing clients that they’re providing services that genuinely add value; that means “not just doing basic things like showing them how their investments are doing.” Those activities could include updating sponsors on topics like financial wellness or educating them on fiduciary issues, for instance. It’s a matter of broadening the conversation to avoid being faced with the question, “If (investment performance) is the only thing you’re doing for me and (the cost of) everything else is going down, then shouldn’t your fee be going down as well?”

A second tactic is to provide third-party benchmarks so sponsors can compare the value of your services—and fees—to those being charged in the wider market. Arthur J. Gallagher & Co. uses reports from both RFP Director as well as other research firms. The benchmarking data in the reports bolster the claim that consultants are providing competitively priced services. “(The reports) give us the ability to, in black and white, show them that this is the percentile we’re at and this is why our fee is reasonable,” Desmond says. “They’re very accepting of those reports and that information contained in there.”