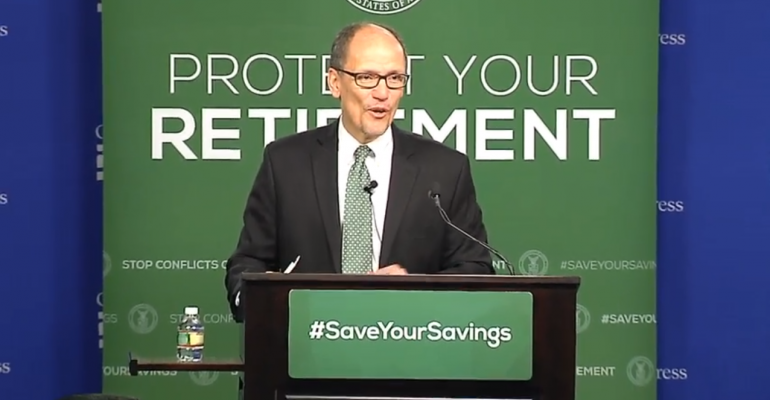 The latest numbers on the U.S. retirement crisis are in, and they point to a massive opportunity for financial planners if they can meet the challenge of providing unbiased retirement advice in a new fiduciary world.

The annual survey of retirement confidence from the Employee Benefit Research Institute (EBRI) released in March suggests workers are more optimistic than they’ve been since the Great Recession. The Retirement Confidence Survey (RCS) found that 21 percent of workers this year are very confident about their retirement prospects, compared with 13 percent in 2013. Those who are somewhat confident rose to 42 percent, up from 38 percent in 2013.

But their confidence is driven by rising confidence in the macro economy, not improving retirement prospects at the individual household level. Fifty-four percent of households have saved less than $25,000—and within that group, 26 percent have less than $1,000.

Just as troubling, most of the RCS respondents don’t have a good grasp of retirement planning basics. Consider the numbers:

The RCS points to a huge need for retirement planning help at a time when the industry’s structure to provide that help is in transition. The workplace is the obvious spot for providing retirement education and advice, but managed account services account for just 3 percent of default sponsor choices.

Increased use of automatic design features by plan sponsors would also help, argues Luke Vandermillen, a vice president at Principal Financial Group. “There’s a reason why automating enrollment and escalation of contributions have become popular,” he says. “You’re making it easier for people to get pointed in the right direction.”

Meanwhile, the advisory business is entering uncharted waters with the implementation of the Department of Labor’s (DOL) fiduciary standard rule. The new world will include a best interest of the client standard for any advice touching ERISA-covered retirement accounts.

The broker/dealer world fought the rule by arguing it will stymie its ability to provide advice to small clients. But others argue the DOL rule will accelerate the trend, already underway, toward low-cost, technology-driven advice for small accounts, and more robust holistic planning services for larger clients.

But a big education task looms. A recent survey of more than 1,000 adults conducted for managed account provider Financial Engines shows that most Americans don’t understand the different business and regulatory models being used today in the advisory profession.

Although 93 percent of survey respondents think it’s important for advisors to put their best interests first, almost half (46 percent) thought that all financial advisors were already required to do that. Among adults who already work with an advisor, 41 percent couldn’t say if their advisor was a fiduciary.

That suggests the industry is in for a period of turmoil as it adjusts to the new regulatory environment.

Most investors weren’t aware their advisor had any other incentive but to act in their best interest, says Chris Jones, chief investment officer at Financial Engines. “That’s important because most individuals don’t know what they are doing in terms of managing their retirement investments—getting advice they can trust is a really big deal.”

Financial Engines kicked off the robo advisory trend with its technology-driven platform serving workplace retirement savers. It now serves workplace plan participants as customers, and the company expects to expand its retail footprint with its recent acquisition of The Mutual Fund Store.

Jones expects all retail advisory relationships to look more and more like the ERISA world in the new fiduciary regime, and that will necessitate more acquisition of robo advisory platforms by traditional retail firms. “Customer acquisition costs are high in the retail environment, which is why many robo advisors are struggling. But if you’re going to operate in the retail space, you’re going to need to be a fiduciary. A lot of firms are seeing that the game is changing—the old days of brokers pushing products on people are numbered. They will need to provide advice more transparently and with consistency.”