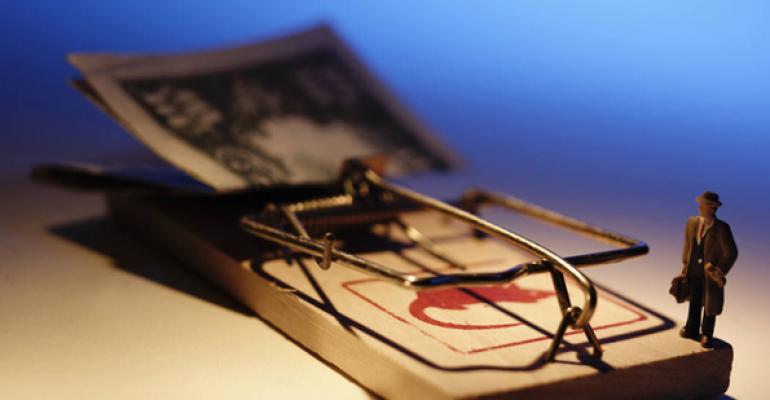 In 2005, Terry formed CST, a limited liability company (LLC).  Terry signed the LLC’s operating agreement on behalf of First Trust Co. of Onaga FBO Terry Ellis IRA (which owned 98 percent of CST).  Terry requested a federal taxpayer identification number for CST, and a taxpayer identification number was assigned to it.  Terry was the general manager of CST, which sold used vehicles.

In June 2005, Terry submitted an application to establish an individual retirement account with First Trust Co. of Onaga (First Trust).  Terry, as CST’s general manager, filed a Form 8832, Entity Classification Election, on behalf of CST, in which CST elected to be treated as an association taxable as a corporation.  At the end of June, Terry received a distribution of $254,206.44 from the IRC Section 401(k) account that he’d accumulated with his former employer.  Terry deposited the entire distribution into his newly opened IRA.   He subsequently caused his IRA to acquire 779,141 membership units of CST, in exchange for a cash payment of $254,000 from the IRA to CST.

In August 2005, Terry received another distribution from his Section 401(k) account in the amount of $67,138.81 and deposited that distribution into his IRA.  He subsequently caused his IRA to acquire 200,859 membership units of CST, in exchange for a payment of $65,500 from the IRA to CST. Following the second deposit, a single membership certificate for 980,000 units was issued to First Trust Co. of Onaga FBO Terry Ellis IRA.

In November 2005, First Trust, the custodian of Terry’s  IRA, requested an estimate of the fair market value (FMV) of the IRA’s membership interest in CST.  Terry provided a valuation of CST to First Trust, which issued to Terry and the IRS a Form 5498 for tax year 2005, reflecting an FMV of the IRA of $321,253.  The FMV consisted of $319,480 of value in the 98 percent interest in CST and a remaining cash balance of $1,773.

In 2005, CST paid Terry $9,754 as compensation for his role as CST’s general manager.  The compensation was issued through CST’s corporate checking account, not from the custodial account of Terry’s IRA.  In 2006, CST filed a Form 1120, U.S. Corporation Income Tax Return, for tax year 2005, in which it claimed a deduction from corporate income for the compensation paid to Terry.  CST also listed additional deductions of $12,106 for payroll expenses, $5,462 for bank service charges and $8,910 for legal fees.

In 2005, CDJ, LLC (CDJ) was organized as a Missouri LLC on behalf of Terry.  Terry owned 50 percent of CDJ, his wife Sheila owned 12.5 percent and their three children each owned 12.5 percent.  CDJ didn’t file a Form 8832 and didn’t otherwise elect to be classified as an association taxable as a corporation.  The purpose of CDJ was to acquire and rent investment property through issuing commercial leases.  In December 2005, CDJ acquired title to real property (the Harrisonville property), for a purchase price of $142,000.  CDJ gave $12,000 as a down payment and obtained a mortgage for the balance of $130,000.

Terry and Sheila filed a joint federal tax return, reporting total income of $75,270, consisting of wages of $76,046,taxable refunds of state and local income taxes of $1,473 and a loss on Schedule E, Supplemental Income and Loss, from CDJ of $2,249. They reported pension distributions of $321,266, but didn’t report them as taxable distributions and as such, reported their gross income as $77,519.  They didn’t report that Terry’s IRA purchased 980,000 membership units of CST in 2005, nor did they disclose that CST, an entity that paid compensation to Terry in 2005, was owned primarily by his IRA.

In January 2006, CST leased the Harrisonville property from CDJ from Jan. 1, 2006, to Jan. 1, 2016.  CST used the property to operate its used vehicle business.  CST paid monthly rent to CDJ for the Harrisonville property; the rental payments totaled $21,800 for tax year 2006.  In 2006, CST paid $29,263 of compensation to Terry in his role as CST’s general manager in operation of its used vehicle business.  Both the rent and compensation payments were made from CST’s corporate checking account, not from the custodial account of Terry’s IRA.

In 2007, CST filed its corporate income tax return for tax year 2006.  On the return, CST claimed a deduction from corporate income for $29,263 in compensation paid to Terry.  CDJ filed a partnership information return for tax year 2006, on which it reported zero income and claimed zero deductions.  The form subsequently reported net rental income from real estate of $830, allocating $414 to Terry, $104 to Sheila and $104 to each of their three children.

In 2007, Terry and Sheila filed their joint federal income tax return for tax year 2006.  They reported total income of $72,705 for tax year 2006, reporting that Terry had wage income from CST of $29,263 and Sheila had wage income from an employer of $41,967.  They also reported that they had taxable refunds of state and localincome taxes of $863, pension income to Terry of $93and Schedule E income from CDJ of $519.  They didn’t disclose that CST, which had paid compensation to Terry in 2005, was owned primarily by his IRA.

The notice of deficiency was based on the premise that at certain points during tax years 2005 and 2006, Terry engaged in a “prohibited transaction” under Section 4975 with his IRA.  The IRS also determined that as of the first day of the taxable year in which the prohibited transaction occurred, Terry’s IRA ceased to be an “eligible retirement plan” under IRC Section 402, and the FMV of the IRA was deemed distributed to him on the first day of that taxable year under IRC Section 408.

The Tax Court first examined whether Terry was a fiduciary.  Terry exercised discretionary authority over his IRA and exercised control over the disposition of its assets.  He funded his plan in June 2005 with the proceeds from his Section 401(k) plan account and exerted control over his IRA by causing it to engage in the purchase of membership units of CST.  Terry was thus a fiduciary of his IRA under Section 4975 and as such, a disqualified person with respect to that plan.

Terry was a fiduciary of his IRA and the beneficial shareholder of more than 50 percent of the outstanding ownership interest in CST.  He was also the general manager and as such, had discretionary authority to determine his compensation.  Terry and his wife, however, claimed that Terry didn’t engage in a prohibited transaction when he caused CST to pay him compensation because the compensation didn’t consist of plan income or assets of his IRA—it was the income or assets of a company in which his IRA had invested.

The Tax Court noted that CST was funded almost exclusively by the assets of Terry’s IRA, which consisted only of its ownership interest in CST.  “To say that CST was merely a company in which Mr. Ellis’ IRA invested is a complete mischaracterization when in reality CST and Mr. Ellis’ IRA were substantially the same entity,” said the court.  By having CST pay his compensation, Terry engaged in the transfer of plan income or assets for his own benefit, violating Section 4975(c)(1)(D).  He also dealt with the income or assets of his IRA for his own interest, violating Section 4975(c)(1)(E).

“In essence,” said the court, Terry “formulated a plan in which he would use his retirement savings as startup capital for a used car business … this is precisely the kind of self-dealing that section 4975 was enacted to prevent.”  Accordingly, Terry engaged in prohibited transactions under Sections 4975(c)(1)(D) and (E) when he caused CST to pay him compensation of $9,754 in tax year 2005.

Because Terry and Sheila engaged in a prohibited transaction in tax year 2005, the entire amount of $321,366.25 converted from Terry’s Section 401(k) plan account is deemed distributed on Jan. 1, 2005.  That amount is, therefore, includible in his gross income for tax year 2005 under Sections 408(d)(1) and 72(a).  Because the IRS determined alternative deficiencies for tax years 2005 and 2006, Terry and his Sheila aren’t liable for the IRS deficiency determinations for tax year 2006.

Sections 6662(a) and (b)(1) and (2) impose an accuracy-related penalty of 20 percent of an underpayment attributed to any substantial understatement of income tax or to negligence or disregard of the regulations.  “Substantial understatement of income tax” is an understatement that exceeds the greater of: (1) 10 percent of the amount of tax requiredto be shown on the return, or (2) $5,000.  “Negligence” includes any failure to make a reasonable attempt to comply with the provisions of the IRC, and “disregard” includes any careless, reckless, or intentional disregard of rules or regulations.  In this instance, the petitioners reported total income tax due of $4,986; the IRS claimed the tax owed for 2005 was $140,922.  Thus, the understatement of $135,936 is greater than 10 percent of the tax required to be shown on the return.

The IRS and the petitioners agreed in a stipulation of settled issues filed on June 12, 2012, that Terry and Sheila didn’t provide sufficient evidence for relief from the penalty determined under Section 6662(a).  Accordingly, the court held them liable for an accuracy-related penalty for tax year 2005.