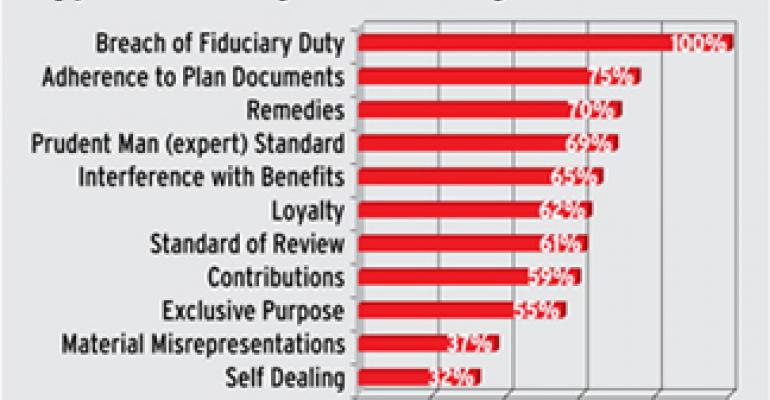 Endpiece: The Prudent Man versus the Prudent Expert

If you advise on retirement plans, you'd better understand ERISA. Because of a Supreme Court ruling, it's easier for disgruntled clients to sue.

In my book, The Four Pillars of Retirement Plans, I predicted that there would be a growing tsunami of small lawsuits for fiduciary breaches in retirement plans, particularly defined contribution plans. I based this prediction on the landmark Supreme Court ruling in LaRue v. DeWolff in 2008. The particulars of this case are not what is really all that important (the claim of damage was based on an administrative processing delay), but the majority opinion of Justice Stevens is important. He wrote, “ERISA authorizes recovery for fiduciary breaches that impair the value of plan assets in a participant's individual account.”

This simple statement should carry a lot of weight with you regardless of whether you advise on retirement plans. That's because as a standard for fiduciary conduct, it may one day in the future evolve to apply to you for any client, not just retirement plans. We don't know what the regulations or interpretations in the future hold for us, but, if you are going to change your business to start acting like a fiduciary, it would probably be best to model your activities from the highest fiduciary standards.

The Litigation Tsunami Is Already Swelling

You are probably unaware of just how many lawsuits there are out there for retirement plans. Such cases, unless they are large class action suits, normally do not make the headlines. According to a study by PensionLitigationData.com, there were 2,400 ERISA cases filed between January 1st, 2005 and August 31st, 2008. They classify cases into groups by types of allegations (with most cases having numerous allegations).

The number of cases filed is already growing. And as more of these cases hit dockets and are heard, no doubt the LaRue decision will make litigation even easier to initiate and allow it to prevail in court, or be settled before being heard. The number of cases filed in the second quarter of 2008 was over 60 percent higher than those filed in the second quarter of 2006. And plaintiffs are gettomg awards in nearly 70 percent of all motions for summary judgment. This is obviously not something you should ignore.

The future is bright for advisors in the retirement plan business; workers say they don't really understand their retirement plans and need the advice. Besides, it represents a multitrillion dollar opportunity. (Please see a related story on page 49.) I am not bringing up the Supreme Court ruling and the growing lawsuits to scare you. Instead, I want you to think about the best way to establish (or re-establish) trust with your clients. I'd like you to think about a grander vision. An advisor can make a handsome living in the retirement plan business without fear of lawsuits if his day-to-day actions are those of a true fiduciary who puts the client's interest first as a prudent expert.

Think about how the trust placed in you would be earned by example instead of perhaps being compromised by sales skills. Think about how rewarding it would personally be to have clients thanking you for acting with honor.

Then, take a step back and honestly think about how what actually happens in our business ethically contradicts this grander vision. Think about the conflicted side of the story presented to prospects by your peers (and perhaps even by you at one time or another). Think about the promises implied in presentations that are offered as facts. As we have learned recently, investors' expectations must be managed and they must be taught to appreciate risk. Think about the numerous times you've heard other advisors intentionally mislead investors with a simple statement that “this is a no load fund” while glossing over (or attempting to hide) a 90 basis point trail buried in a “C” share expense ratio.

Whatever regulatory reforms come out of Washington, know that the trust our industry had with clients has been squandered. It's time to rebuild.

David B. Loeper is the CEO of FinanceWare.com.