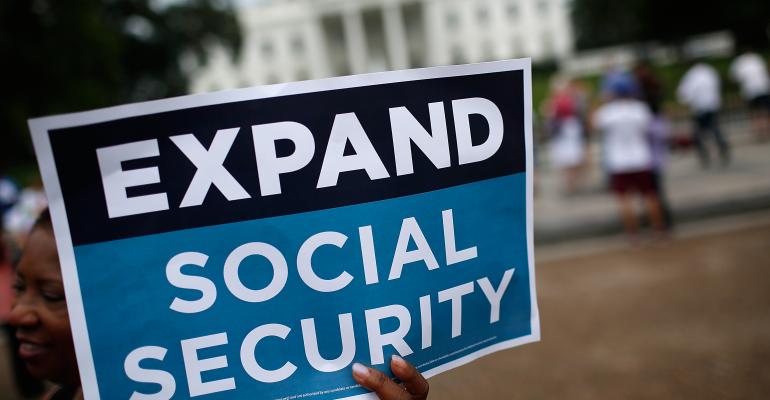 This Election Could Help Make or Break Your Retirement

(Bloomberg) -- With the future of Social Security in question and a dangerous shortfall in many Americans' savings, five states are testing out bold and controversial legislation to get people to put away more for retirement. The new laws could give much-needed financial options to one in five Americans, opening the door to similar experiments in other states—depending on who gets elected in November.

Connecticut, Illinois, Maryland, and Oregon have all passed laws requiring employers to either offer their own retirement plans or seamlessly connect workers to a well-designed state plan. California is considering a similar scheme. When these plans are in place (the first will take effect next year, at the earliest), retirement experts hope they’ll become laboratories to improve the American 401(k).

"Because different states are trying different approaches, state plans can be the innovation labs for better retirement," said Joshua Gotbaum, a guest scholar at the Brookings Institution and former head of the U.S. Pension Benefit Guaranty Corp. "They can—and I think, will—create new options for gig workers, for portability, for lifetime income, and for getting better coverage at lower cost."

Not a moment too soon: The government estimates that Social Security will run out of money to pay full benefits in 2034. Three in five of all households have no money saved in a retirement account. Only about half of private sector employees have a retirement plan at work. And many workplace 401(k) plans are expensive and inadequate.

The new retirement-saving laws will face a challenge, though, if the coming election creates an incoming wave of lawmakers leery of such mandates on employers. Democrats have championed the new laws. Successful Republican candidates could scuttle the plans or water down their rules. AARP, which supports the new retirement bills, says it will be pressing state candidates to take a position.

"Encouraging people to save for retirement is a good thing, but forcing a new mandate and taking over a private-sector industry is not the appropriate role for the state," Connecticut Senate Minority Leader Len Fasano, a Republican, said earlier this year.

When gubernatorial candidates get grilled on these issues, it may be their only mention during this campaign season. Personal finance has barely been touched upon by presidential candidates, who have addressed only Social Security—and then mostly in vague terms.

"This is, in many ways, a campaign devoid of issues and focused more on the personalities of the candidates," said John Hishta, a political strategist at AARP who helps lead its political organizing. "That's something we have to overcome."

Presumptive Republican nominee Donald Trump has said he wants to keep Social Security the way it is without cutting benefits, as was proposed by most of his rivals for the nomination. His Democratic rival Hillary Clinton has proposed modestly expanding Social Security while raising taxes on upper-income earners to shore up the program’s finances.

The most ambitious plan to expand the program came from Democratic wild card Bernie Sanders. But even if his plan were implemented, it would bring the average retiree’s monthly check up from $1,347 a month to only $1,412.

One solution: Make work-based retirement plans opt-out, not opt-in. The new laws will require that employees be automatically enrolled in a state-sanctioned retirement plan if their employers don't offer one. Those workers would need to file paperwork to exempt themselves. The self-employed, such as gig workers, wouldn't be automatically enrolled, but they could have a new portable saving option that has been vetted by experts. All workers, including part-timers largely left out of current 401(k)s, would get to save more while losing less to fees.

That’s the goal, anyway. Each state is taking a slightly different approach, though all emphasize that participation is entirely voluntary: Workers can always opt out, or they can lower or increase how much of their salaries they contribute.

The latest state to take action is Connecticut, but this almost didn’t happen. House members debated the bill for more than six hours, and the vote in the state senate was a tie, broken by the lieutenant governor. Governor Dannel Malloy signed a bill on May 27 only after the legislature passed an additional bill that made some changes to the legislation.

Republican legislators objected that the bill creates another burdensome mandate on businesses. The Connecticut Retirement Security Program will require every business with five or more employees to offer a retirement plan or automatically sign workers up for a Roth individual retirement account. A survey conducted by the state found that 48 percent of employers opposed the program vs. 40 percent in support.

Three percent of salaries will automatically go into the IRA accounts, to be administered by a new, quasi-public agency. The state estimates that 84 percent of workers will participate after being automatically signed up for the plans.

In 2012, California approved a bill to study the idea of a state-run retirement plan. Less than three months ago, recommendations for a “California Secure Choice” plan were sent to the legislature. If enacted, every employer with five or more employees would need to offer a retirement plan or automatically enroll workers in the state plan. The plan calls for the automatic contribution of 3 percent of a worker’s salary, a rate that will automatically rise to as much as 8 percent over time.

The state will create individual accounts, managed by a private firm, for employees of businesses that don’t otherwise have a retirement plan. Companies with at least 25 employees will be required to automatically enroll their workers in the target-date Roth IRAs, initially deducting 3 percent of their salaries. The state says it expects to have the program up and running next year.

Maryland Governor Larry Hogan is the only Republican governor so far to go along with a retirement mandate on businesses. He signed the plan into law on May 10 after it passed the legislature by wide margins. The law lets the Maryland Small Business Retirement Savings Program determine how to set up the program, including how much of their salary workers must initially contribute. Unlike other states, Maryland doesn’t automatically exempt the smallest businesses from a requirement to offer access to a state-run IRA.

Oregon’s state-sponsored retirement plan is slated to open in July 2017. An Oregon Retirement Savings Board is determining the details of the plan. It will automatically enroll workers in portable, privately run accounts and will automatically increase their contribution rates over time.

Legislators in other states are pushing similar plans. Washington and New Jersey have rejected the idea of mandating that employers enroll workers, but both states are setting up websites to give employers better information on plans.

Will more states take action? It may depend on the partisan tilt of statehouses after the 2016 election. In 2008, the presidential campaigns of both John McCain and Barack Obama supported automatically signing up workers for retirement accounts. Since Obama’s election, however, Congress hasn’t done anything, and the driving force for state-run retirement plans has come from Democrats. Gotbaum believes that opposition to the Affordable Care Act made it much more difficult for Republicans to impose additional requirements on businesses.

Proponents of state-run plans, meanwhile, say the whole point is to make it easier on small businesses—by letting them pass on the burden of running a retirement plan to the experts.