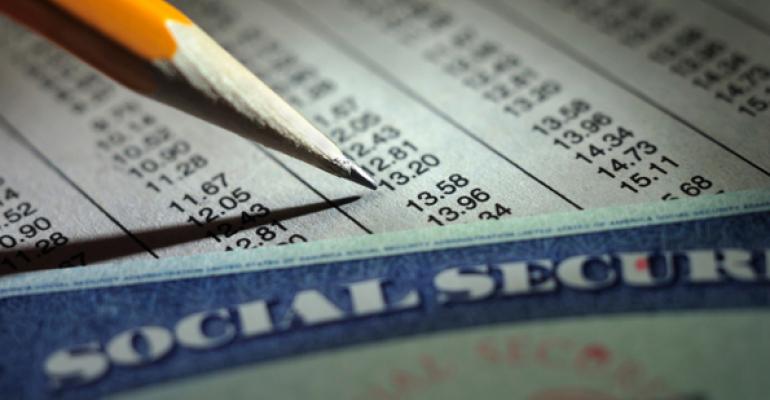 In our last column we examined how to qualify for Social Security (SS) benefits.  Now we take a look at what you and your clients need to know when deciding when to collect.

A worker can begin collecting SS benefits as early as age 62, as late as age 70 or anytime in between.  In this column, we design a simplified framework to compare the available options for a single individual client.  Life expectancy, of course, plays a critical role.

For a single individual, the best approach may be to calculate the crossover year, that is, the year in which option B becomes more economical than option A.  For example, if your client is comparing retirement at age 62 to retirement at age 66, he has a choice between starting earlier and collecting less per year or starting later and collecting more per year.  If you and your client can figure out when option B overtakes option A, it becomes a simple question of whether he thinks he’ll live that long.

Let’s look at a simple example of how to compare the options.  Assume your client (Kevin) has a primary insurance amount (PIA) of $2,000.  This means that at his full retirement age (FRA) (assume it’s age 66), he’ll collect $2,000 per month.  If he takes early retirement, his benefit will be permanently reduced by 25 percent to $1,500.  If he delays his benefits until age 70, he’ll earn four years of 8 percent deferred retirement credits (DRCs) and his benefit will increase by 32 percent to $2,640.

Let's analyze Kevin’s benefit payout under early, full and delayed benefit scenarios.  We’ll assume a 2.5 percent cost of living (COLA) benefit each year. To make a fair comparison, we’ll also need to account for the time value of money, so we’ll assume a 3 percent present value discount rate.  The present value is simply the lump sum that would be needed at age 62 to provide the illustrated benefits to the designated age.

The following summarizes the annual benefits for each option.  Note that the crossover years are highlighted. 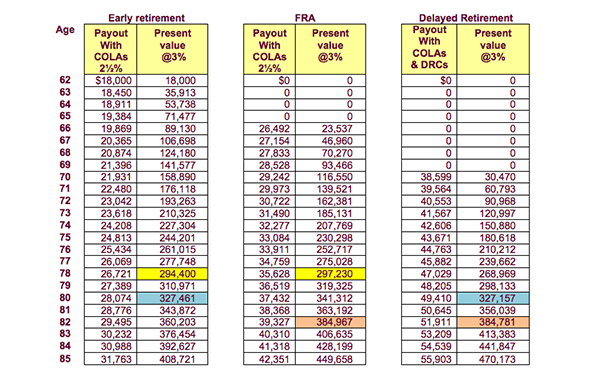 If he starts at FRA, he would already be entitled to the assumed COLA benefits from age 62 to age 66, even though he hasn’t started collecting yet.  His starting benefit at age 66 would be $26,492 per year.  Based on these assumptions, the crossover occurs at age 78.  That’s the year that the present value of cumulative benefits starting at age 66 has caught up to the value of benefits starting at age 62.  From age 78 on, the advantage to staring later becomes more pronounced each year.  So if it’s reasonable to assume a life expectancy greater than age 78, Kevin would be better off starting at age 66.

In most cases, the most economical arrangement for someone with a normal life expectancy is to delay benefits until age 70.  The 8 percent per year (simple interest) enhancement is hard to pass up.  However, if the worker needs the money to live on, he may have no choice but to start at age 62 or FRA.

If the worker has never been married and doesn’t have children or parents he’s supporting, the above analysis is usually sufficient.  But keep in mind one factor that we’ve left out: the excess earnings tax (EET).  If the worker begins collecting before FRA and continues to earn employment income, his benefit may be reduced further as a result.

There are situations in which a worker may come to regret the decision to retire early.  He may not have realized that: (1) the benefits are going to be permanently reduced, (2) the benefits may be reduced even further by the EET, or (3) there’s a significant difference in benefits between early retirement and age 70.

If Kevin is in that situation, he may be able to retroactively terminate his benefits during the first 12 months.  This is often referred to as the “restart program.”  He writes a check back to the government (interest-free) for the amount that he’s already collected.  An income tax adjustment will then be made.  If he did this, Kevin’s SS retirement program would be retroactively reinstated.  He’d be treated as if nothing had happened.

In our next article, we’ll cover the six benefit enhancements a worker receives if he’s willing to wait until FRA.  Three of these were covered in our first article.  Two of the other three will only apply to married workers. They will require a more thorough analysis.