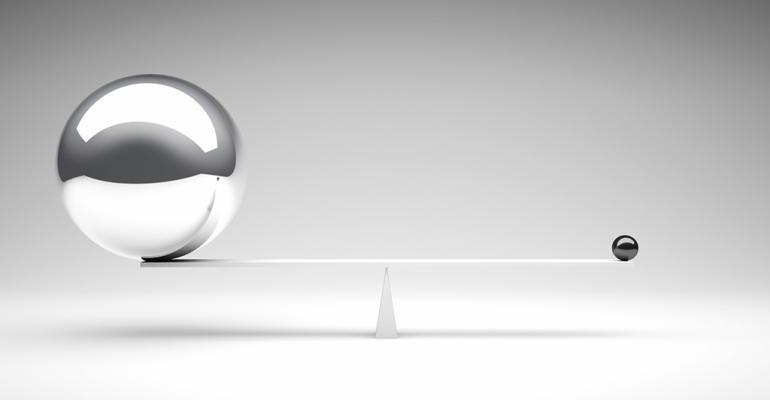 It’s not the size of the plan that counts.

Large 401(k) plans tend to garner the headlines. Those plans have the most assets and participants and they’re often early-adopters, creating the trends that smaller plans emulate. But these mega plans operate in their own league, one that’s inaccessible to many plan advisors.

Fortunately, smaller plans offer ample business opportunities. Bill Harmon, president of corporate markets for retirement at Voya Financial in Windsor, Conn., cites a 2017 Cerulli Associates report as evidence. The study found just under 500,000 plans with a combined total of about $500 billion in assets. Among those plans, two-thirds had less than $1 million each. Voya has experienced solid growth in that market, Harmon notes. Transfer deposits were up nearly 40 percent for 2017 versus 2016 and the rapid growth has continued into 2018.

New York City-based Betterment for Business, part of robo advisor Betterment LLC, also reports strong growth among smaller plans. The company’s 401(k) offering, launched in January 2016, now has over 400 clients. More than half of those plans qualify for microplan status with less than $5 million of assets.

Stephen Rischall, CFP, CRPC with 1080 Financial Group in Sherman Oaks, Calif., estimates that retirement plans, including 401(k)s, account for about 30 percent of his firm’s business and that percentage is growing. He attributes that growth at least partly to the continued economic rebound since recession’s end. “During the recession, a lot of these small businesses either shut down their 401(k) or stopped matching—all sorts of things happened,” he explains. “Now it’s kind of late into the recovery, but we’re seeing a lot more optimism from smaller businesses. Maybe it’s to retain and attract employees. There’s multiple reasons why, but we’re definitely just seeing more interest from smaller businesses wanting to provide these types of benefits to their employees.”

That also has been the experience of Darin Shebesta, CFP with Jackson Roskelley Wealth Advisors in Scottsdale, Ariz. The more stable economy has given small business owners the confidence to offer new or improved employee benefits, he believes. At the same time, a stronger economy has increased employee recruiting and retention. “When you’ve got employees or potential candidates out in the marketplace and they’re looking at benefit packages … with any big company, it’s automatic that they have a 401(k),” says Shebesta. “So, they’ve got to be competitive in the marketplace to provide a comparable offering.”

Like their large plan counterparts, microplan sponsors focus heavily on plan fees. Although they continue to pay relatively more than large plans, small plans’ costs continue to decline. According the 401k Averages Book, in 2017, plans with 50 participants and $5 million in assets paid an average total cost of 1.18 percent, divided between investment costs (1.14 percent) and recordkeeping (0.04 percent). That total cost figure has declined steadily since 2013 when it was 1.29 percent. As with other market trends, the emphasis on cost-cutting started with larger plans and has made its way down market.

Shebesta describes costs as a “huge” issue with his small plan sponsors. Plans always want to minimize costs, he says, and that emphasis has led him to include more passively managed and indexed options on plans’ platforms. “And, so, ideally, you’d want to have an index option and then an active option in each of the asset classes so people actually have a choice,” he says.

Rischall has a similar perspective. His firm operates as a 3(38) fiduciary in which he describes a “humongous” trend among sponsors seeking lower cost, passive funds, typically index funds. There are still cost and operational challenges to using exchange traded funds, he adds, but there’s more interest in funds with fees in the five to 15 basis points cost range.

Technology to a Point

Not too long ago, a cutting-edge web portal for plan participants provided summaries of the plan’s investment options plus a periodically updated account balance report. That’s changed, as large recordkeepers and tech-centric providers like Betterment for Business have significantly upgraded the plans’ online capabilities. “Where we’re seeing massive amounts of transformation is the ability of the small business owner to now offer cutting-edge tools to their employees that were once reserved for really large retirement plans,” says Tom Conlon, business success executive at Betterment for Business. “I think this is really cutting edge to the micro market because this type of service at such a low fee was never previously available.”

Harmon agrees that “technology done right can deliver a very simple and intuitive process,” which in turn makes it much easier for sponsors to buy and design a plan, onboard and service participants. Nonetheless, participants’ interaction with the online platforms is still “very much reactive,” Rischall maintains. He agrees that a rich, interactive technology can be beneficial, but in his experience it’s still rare to hear feedback on the web portal. “I think the trends might be coming as the younger generation starts to take over as more of the workforce and more of the decision makers, but I’ve yet to actually experience that myself.”