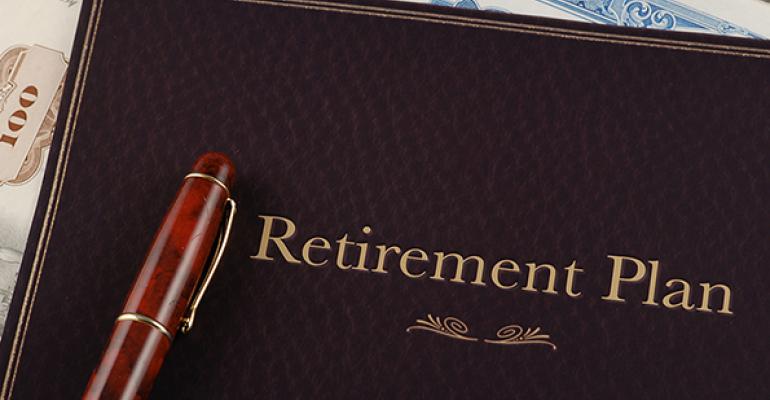 Let's explore options for minimizing this disparate post-death income tax treatment. For illustrative purposes, let's work with an example of a male account owner, age 60 and in excellent health. He owns a taxable IRA account in which he's invested $500,000 and that has a current appreciated value of $1 million. Assume the account owner lives to his approximate life expectancy of age 80 and that all investments grow at a 5 percent (principal plus income) compound rate. Also assume a combined 40 percent federal and state ordinary income tax rate and a 20 percent combined capital gains tax rate. Finally, for simplicity purposes, assume an RMD each year (beginning at age 70 1/2) of 5 percent, or the same as the assumed total return rate, because 5 percent approximates the average annual RMD for individuals ages 70 through 80.

This is probably the most prevalent retirement benefit withdrawal plan today, that is, to take only the RMDs during the owner's lifetime, at least for larger IRAs. But question: Is this the smartest financial plan? Assuming all after-tax RMDs beginning at age 70 1/2 (approximately $80,000 per year, gross and $48,000 per year, net of tax) are reinvested in a portfolio of securities producing no current taxable income but 5 percent overall growth, at age 80, the owner's original $1 million taxable IRA would look something like this:

Note that, under the above-described plan, the owner's original $500,000 investment in the IRA would have already been withdrawn, over ages 70 through 80, and appropriately taxed to him at ordinary income tax rates, because he received a deduction for a like amount off of ordinary income. An additional $300,000 would have also been withdrawn under the RMD rules, again all taxed at ordinary income rates, even though no prior income tax deduction was received for this amount and even though the IRA may have been invested entirely in the stock market. The after-tax reinvested sum (or $48,000 per year) would have grown, outside of the IRA, to $600,000 and would be properly eligible for income tax basis step-up at the owner's death.

Alternative 2: Convert All or a Portion of the IRA to a Roth IRA

Converting the $1 million IRA at age 60 will obviously mean that the entire amount will be taxed at a higher combined federal and state income tax rate, which for our purposes we'll assume is 45 percent. This leaves $550,000 to grow inside of the Roth IRA, which, after 20 years at 5 percent compounded, will equal approximately $1.459 million.2

Although this plan arguably solves all of challenges (1) through (3), described above, it does so in a manner that, at age 80, actually leaves the owner and his family with slightly less than the after-tax value they would have received under Alternative 1 ($1.48 million, assuming the IRA was liquidated at the same 45 percent combined federal and state income tax rate and a step-up in income tax basis for the nonqualified portfolio). Thus, it appears that a complete Roth conversion isn't the answer to the issues we have with the unfair manner in which post-death IRA distributions are taxed.

Smaller and annual partial IRA conversions may provide a slightly better result than a complete conversion at age 60, primarily because of the lower income tax rate on the smaller withdrawals.3 For example, if at age 60, the owner were to begin withdrawing $50,000 from the taxable IRA each year and convert the net amount after 40 percent ordinary income taxes, or $30,000, into a Roth, the Roth account would grow to approximately $1 million by the time the owner reached age 80. Added to the after 45 percent tax rate value of the approximately $1 million still remaining in the taxable IRA, at age 80, the after-tax value of the owner's portfolio would be approximately $1.55 million, $70,000 more than the original result in Alternative 1, above.

This plan is similar to the annual Roth conversions option discussed under Alternative 2, but instead of transferring the $30,000 net amount into a Roth IRA each year, the net amount is used to purchase as much face value life insurance as possible. To preserve some of the IRA for the owner's lifetime needs, the premiums are intentionally kept smaller and only paid for 10 years.4

Under the plan, at age 80, the owner's financial situation is projected as: 5

Assuming a 45 percent combined federal and state income tax rate if the taxable IRA were liquidated in full and a stepped-up income tax basis on the owner's nonqualified portfolio, the after-tax value of the owner's portfolio, if he were to die at age 80, would be approximately $2.027 million or $477,000 (approximately 31 percent) more than the best of the two Roth conversion options described in Alternative 2, above ($1.55 million) and $547,000 (approximately 37 percent) more than the original result in Alternative 1 ($1.48 million). What's potentially even more significant, under Alternative 3, the owner's family would have $1.477 million growing at capital gain tax rates (or at no tax, to the extent the assets are not sold during life), compared to only $600,000 growing in this favorable tax environment under Alternative 1.

In taxable estate situations, Alternative 3 presents the additional possibility of having the income tax-exempt life insurance policy held inside an irrevocable life insurance trust (ILIT), which, unlike a taxable IRA or Roth IRA, would render the proceeds estate tax-exempt. If access to the policy's cash surrender value is deemed necessary (which would be unlikely, in today's high federal estate tax exemption environment), the ILIT can be structured as a spousal access trust or as a wealth, retirement and asset protection trust.6

One potential disadvantage of Alternative 3 is that, during the owner's lifetime, he'll have less available funds to spend. For example, when the owner reaches age 80, the cash value of the life insurance product assumed in this article is projected to be only approximately $200,000. This amount, when added to the remaining after-tax value of the IRA (assuming the maximum 45 percent combined tax rate) and the after capital gain tax value of the nonqualified portfolio, would equal approximately $1.1 million, whereas under Alternative 1, the owner would have approximately $1.45 million available to spend at age 80, after taxes. If this lifetime use issue is a significant concern to the owner, he may elect to structure the life insurance policy so that it will produce a larger cash value, but a lower projected death benefit.

Another potential disadvantage to Alternative 3 is that the owner may live substantially beyond age 80, in which case an unchanging face amount life insurance policy may not keep pace with the value of otherwise available investments. To address this concern, the universal policy can be structured to provide an increasing death benefit, rather than a stagnant $1.1 million face amount.