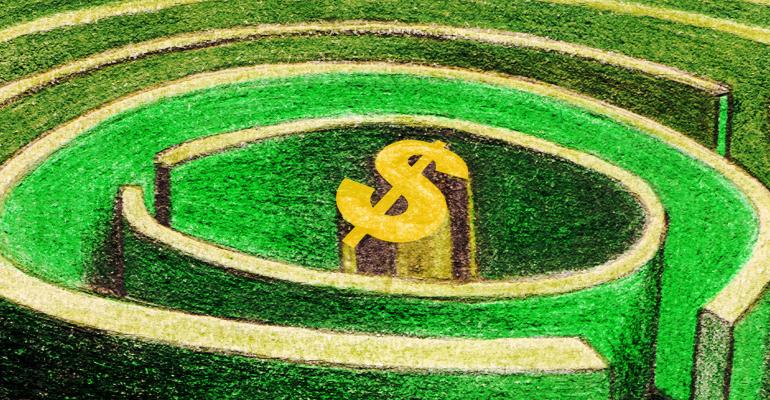 SRI funds are slow to crack the $6.7 trillion 401(K) market, even though investor demand is strong.

ESG investing has experienced dramatic growth in the past two years, but most of the momentum to date has been generated by institutional and high net worth investors. What could take socially responsible investing to the next level? Workplace retirement plans.

Cracking the code on the 401(K) market would put ESG and SRI mutual funds squarely in front of workplace savers with smaller portfolios. Plus, it's a giant market — $6.7 trillion in assets were held in defined contribution plans at the end of 2015, according to the Investment Company Institute.

The demand is there. A survey by Natixis Global Asset Management of U.S. investors found that 82 percent would like to see investment options in their retirement plans that “reflect their personal values,” and 62 percent said they would increase their contributions if they knew the investments “were doing social good.” Among millennials, that figure jumped to 72 percent.

“Those statistics really jumped off the page at me,” says Ed Farrington, executive vice president of retirement strategies at Natixis, which introduced the first ESG-based target date fund (TDF) for the 401(K) market in February. The Natixis Sustainable Future Funds is built around 10 underlying funds with vintages ranging every five years from 2015 to 2060; securities are selected based on ESG criteria such as fair labor practices, anti-corruption, human rights, fair business practices and environmental impact.

The fund utilizes a proprietary ESG rating of 8,000 corporate equities with what Farrington called “a tilt toward value, because highly rated ESG stocks tend to be growth-oriented.” A global green bond fund also is included. The passive component is a sleeve that mimics the return of the S&P 500.

Natixis is plowing new ground. Vanguard, for example, reports that just nine percent of the defined-contribution plans it administers offered a socially responsible domestic equity fund in 2015. The market has been slow to develop due to regulatory scrutiny of workplace retirement plans, plan sponsor reticence and product limitations.

At the same time, overall ESG growth in the U.S. has accelerated sharply. The Forum for Sustainable and Responsible Investment reports that $8.72 trillion in assets were under management in ESG or SRI funds at the start of 2016, up from $6.57 trillion at the start of 2014. As recently as 2012, AUM was less than $4 trillion.

Interest in ESG/SRI has spiked since the November election, according to some advisors. “A growing number of people are no longer comfortable that government will be active in helping to mitigate climate change, or in applying gender fairness in the workplace,” says Paul Ellis, a certified financial planner who has worked for the past 15 years as a consultant on sustainable investing, helping advisers to integrate ESG/SRI in their practices. “Investors are no longer waiting for government at the federal, state or local level to take the initiative. They are doing more and more with their own investment dollars.”

The evolution of ESG investment offerings also has stimulated growth. Early on, the market was characterized mainly by higher-cost active funds that used negative screening criteria to exclude specific investments (fossil fuels for example). Yet, sophisticated ESG criteria have ushered in broad-criteria funds that select “best-in-class” securities across all industry sectors.

This approach opens up more potential for ESG to get a foothold in 401(K) plans. ESG investing is not likely to take off in workplace plans unless it fits into the broader model of the modern 401(K) plan, which centers around automation of asset allocation, and behavioral finance features like auto-enrollment and auto-escalation.

“10 years ago, we would hear from plan sponsors who were getting requests from participants for an SRI fund. They would add a fund, but didn’t get a lot of pickup,” says Jon Hale, head of sustainability research at Morningstar. “That was before the time of TDFs, so the SRI fund would just be one choice on a very long menu of funds.”

“Today, there’s probably potential demand coming for 401(K) plans to add ESG options, but as a practical matter, it will have to be a TDF or something similar that permits investors to structure their overall portfolio around ESG.”

Expense will be an issue. The new Natixis TDF offering carries total fees of 65 basis points, a bit higher than the 51 basis point average for a market-weighted TDF in 2016, according to Morningstar. Furthermore, the industry’s most efficient passive TDF offerings are far less expensive, typically 13 basis points. (None of the three largest defined contribution plan administrators — Vanguard, Fidelity and T. Rowe Price — have ESG target date offerings.)

Regulation also has been a hurdle. During the George W. Bush administration, the U.S. Department of Labor issued a "warning" guidance letter stating that ESG funds might not comply with plan sponsors’ fiduciary obligations. The DOL issued a follow-up letter in October 2015 that was seen as more encouraging to plan sponsors. The guidance affirms that fiduciaries cannot accept lower expected returns or greater risk to secure a collateral benefit such as social impact, but can take those benefits into account as “tiebreakers” when investments are otherwise equal.

To no one’s surprise, that signal hasn’t led to rapid change among plan sponsors. “There is tremendous bureaucracy in the 401(K) space,” says Farrington. “Convincing sponsors that we can help them meet their fiduciary liabilities with this approach will take time.”

Although the active component of ESG funds boosts costs, there is some evidence that performance may be within that tiebreaker range, or better in some cases. “The academic evidence doesn’t point to any performance give-up,” says Hale. “Any option that isn’t a purely passive low-cost offering is going to be a bit more expensive, but there is intriguing evidence that companies with strong ESG performance are associated with strong financial performance, especially in the longer run.”

Ellis agrees, although he cautions that the track record for many funds is still too short to draw conclusions. “What I’m seeing is that active ESG funds can compete with passive indexing when they do a good job picking investments, managing risks and keeping their expenses low,” he says. Examples he cites that have beaten their respective benchmarks over the past three years include domestic large-cap Parnassus Endeavor Fund Institutional Shares (PFPWX), international fund Domini Impact International Equity Fund Institutional Shares (DOMOX) and fixed income offering TIAA-CREF Social Choice Bond Fund Institutional (TSBIX).

If ESG does take off in the workplace, growth of AUM won’t be the only impact, Hale thinks. It could also create a new level of engagement by plan participants in their retirement investments.

“Since the election, we’ve been seeing people get much more active in their consumer choices as a way to express their beliefs. If that extends to investing, that will make them better investors,” he says. “I’ve talked to a number of ESG investors who feel they know more about their investments than they ever did before,” he adds. “Where they once felt that they didn’t know what they were doing and wanted arm’s length relationship, that’s changing.”

Farrington points to the Natixis survey finding that social good could encourage people to save more, adding that ESG options could discourage account leakage from loans and withdrawals. “What we want is for people to take advantage of the employer match, and to stay invested,” he says. “We think tapping into this desire to do good can create connectivity with investments that will make people think twice about making these decisions.”

Higher levels of retirement saving? That would be a social good all its own.