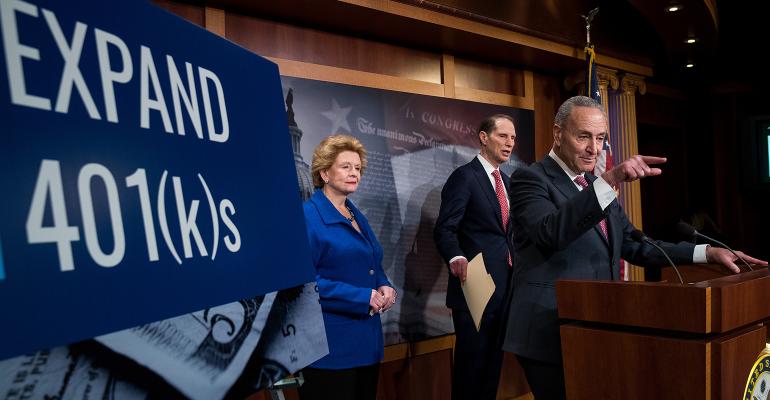 Saving for retirement is already difficult. Why make it more so?

(Bloomberg Opinion) -- Saving for retirement can be a perilous endeavor in the U.S., thanks in part to the Trump administration’s moves to weaken safeguards against unscrupulous sellers of financial products. Now Congress is poised to make things worse -- by undermining protections governing the country’s most popular investment vehicle, the 401(k) plan.

Named after a once-obscure 1978 provision in the tax code, the 401(k) allows people to set up retirement-savings accounts through their employers, with income taxes deferred until the money is withdrawn. Employers and their chosen administrators assume fiduciary responsibility for the plans, meaning that they’re supposed to offer a menu of sensible investment options. Ideally, these include low-fee mutual funds, sometimes targeting a specific retirement date.

Amid growing concern about the number of people financially unprepared for retirement, Congress is considering tweaking how the 401(k) works. The overall intent of the relevant bipartisan legislation, known as the SECURE Act in the House and RESA in the Senate, seems admirable: Encourage people to save more. Among other provisions, the bills could help small employers band together to create efficient 401(k)s, and increase age limits for contributions to tax-deferred accounts.

Yet the bills also seek to encourage a currently rare option in 401(k) plans: annuities. In principle, this could be wonderful, if the bills permitted only true annuities -- that is, investments that pay a guaranteed, fixed sum of money each year -- and if the fees they charged savers were kept in check. Unfortunately, neither is the case.

Many annuities sold in the U.S. are complicated, overpriced products with payments determined by sometimes deceptive formulas that even sophisticated investors struggle to understand. Worse, the legislation specifically frees 401(k) providers from any hard obligation to pick the lowest cost products, allowing them wide leeway to consider a range of factors. That’s startling, given that excessive cost is the single greatest critique leveled against both 401(k) plans and many forms of annuities.

Granted, it’s possible that 401(k) providers will work with insurance companies to offer annuities with genuinely transparent, predictable streams of retirement income. The providers’ fiduciary duty should hold them to a higher standard than the insurance agents who typically peddle the worst products. Yet given 401(k) plans’ mediocre track record, coupled with the insurance industry’s long track record of selling inappropriate products, I wouldn’t bet on it.

Why would legislators expose savers to such risks? I won’t speculate, but I will note one potentially relevant fact: Over the past 30 years, according to OpenSecrets.org, people and entities associated with three organizations -- Mass Mutual Life Insurance, FMR (the parent company of Fidelity Investments) and the National Association of Insurance and Financial Advisors -- have collectively been the largest donors to Congressman Richard Neal, who introduced the legislation in the House.

Congress should make substantive fixes before it sends the legislation to President Trump’s desk. Specifically, limit the “safe harbor” that shields 401(k) providers from liability, making it apply only to true fixed annuities. Explicitly place the burden of proof on fiduciaries to justify any inclusion of a higher-cost investment option in a 401(k). Lastly, require plan fiduciaries to evaluate and justify the expected returns on annuities and other proposed investment options compared with low-cost bond and equity index funds.

Otherwise, instead of helping secure Americans’ retirements, Congress could end up making them even more vulnerable.

To contact the editor responsible for this story:
Mark Whitehouse at [email protected]