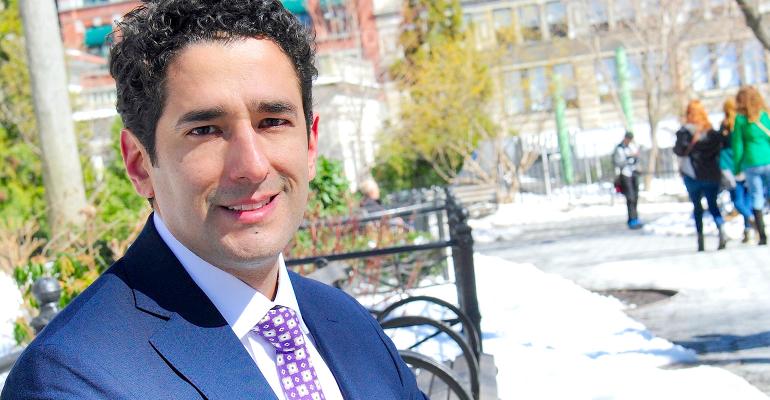 Carlos Garcia hopes to help Hispanic immigrants and their children save for retirement, with a low-cost dual-language robo advisor.

The switch from traditional pensions to 401(k)-style retirement plans has failed most American workers, but perhaps no group more than first-generation immigrants and their children.

While defined contribution plans were supposed to broaden access to retirement benefits, Economic Policy Institute data shows that participation has declined across all demographics, except for the highest income earners. Most families in the bottom half of the income distribution have no retirement account savings at all.

The gap is even wider for minorities. In 2013, only 26 percent of Hispanic families had a retirement savings account (compared with 65 percent of white, non-Hispanic families) and those that did had a median of $22,000 saved (compared with $73,000 for whites). Even among Hispanic workers nearing retirement age, the majority do not have a retirement savings account at all and the Economic Policy Institute said the gap only appears to be widening.

Carlos Garcia, a 37-year-old Texas native born to Mexican immigrants, doesn’t attribute the disparity to income, education or work ethic. He says it has more to do with access, transparency and a culture that doesn’t often discuss financial planning or retirement saving.

“Going back to my family, it’s something we never really discussed,” Garcia said. Nor was it something he learned while studying electrical engineering and computer science at MIT. “My first job was at Merrill Lynch. It wasn’t until my third year that I realized there was a 401(k).”

To help break this cultural barrier, Garcia says families need to learn positive financial habits that can be built upon and passed to future generations. That ambition is the animating spirit behind Finhabits, a digital advisor he introduced in February — the first, and only, robo to court Hispanic families in their native language.

Like other robos, Finhabits begins with an online questionnaire to assess the user’s age, income, net worth and risk tolerance. An algorithm then uses the information to invest the person into a diversified portfolio of ETFs.

Users can invest as little as $5 per week. Finhabits charges $1 per month for accounts with less than $2,500 and a 50 basis point annual fee for everything above that.

“We are not the cheapest [robo], but we are in fact much cheaper in most communities than the average wealth manager’s fee,” Garcia said. “First, we get in front of them and provide access, then we let them know we’re going to help them build good investing habits over time. Emphasize that to build habits, you have to do it with small, repetitive actions.”

It’s working so far, he says. Thanks to nudges and reminders from Finhabits, users have increased their contributions to an average of $40 per week.

The real difference from other robos and micro-investing services is that Finhabits is not about reaching relatively wealthy millennials or the mass affluent. It’s specifically tailored for minority citizens and green card holders earning $40,000 a year. Garcia says it’s about including families who have historically been denied the opportunity to save for retirement.

In addition to being offered in both Spanish and English, Finhabits addresses financial concerns unique to the Hispanic demographic with educational content around topics like supporting family members in other countries or retiring in Latin America.

And no, he doesn’t think Finhabits contributes to what some call a “shadow economy” of moving money across borders.

“The shadow economy that we’re trying to help here are those U.S., Hispanic workers that are working hard, paying Social Security, but still don’t think they have the opportunity to participate in the economy like the rest of the other ethnic groups,” Garcia says. “The shadow economy is all that cash that is sitting there and not being invested just because they don’t have access to a service or because they don’t know how to start.”

Finhabits began with a test launch in communities in Texas, Florida and Georgia. It’s now publicly available, but the company is focusing its marketing in Spanish-speaking areas in these states, as well as New Mexico, Arizona and California. Garcia and his team are also reaching out to small business owners who employ Hispanic workers to offer Finhabits as a retirement benefit.

The robo comes during a time of increased uncertainty for immigrant families. President Trump has not backed away from the rhetoric he campaigned on, signing a controversial travel ban, promising to build a wall on the Mexican border and ramp up deportations, perhaps even of those who were brought to the U.S. as children.

“It’s just there,” he says when asked about President Trump and the current political climate regarding immigrants in the U.S. “It doesn’t really influence the way we think about our service or how we think about the engagement with our users.”

He believes the current political climate will only strengthen the resolve of a culture that values hard work — something Garcia learned from his father, who works in manufacturing, and mother, a small business manager. Without connections to financial services, Garcia used computer skills honed at MIT to find a job at Merrill after the tech bubble, when the bank was looking to automation as a way to cut costs.

In four years, he moved into managing Merrill’s portfolio of investments in technology startups before becoming a partner at Galileo Investment Management. He then helped found Fundspire, a web-based analytics and reporting service for hedge funds. After eVestment acquired Fundspire in 2012, Garcia founded a quantitative strategies firm where he still serves as managing partner.

Garcia says his Mexican heritage hasn’t been an obstacle in an industry traditionally dominated by white men.

“I’m of the belief that everyone has the same opportunity and that is my mindset. Some might have other connections, some people might have parents that are connected — it doesn’t matter,” Garcia said. “That’s why I believe that the Hispanic community has so much potential in the U.S.”

“Most of our parents and grandparents were not wealthy, but we are. Our next generation will be.”

He also believes Finhabits is positioned to take advantage of shifting American demographics. Hispanics are the fastest growing ethnic group in the country and are expected to make up 30 percent of the population by 2050, according to the Pew Research Center. They’re also one of the fastest growing groups in terms of income levels.

“Yes, our average client is middle-class, but our plan is long-term,” he says. “We will be with them when they cross $100,000 and when they cross a million. That’s the plan.”

That’s why he’s not concerned about the skepticism robos face from the traditional players in wealth management. He sees Finhabits as providing a service that previously didn’t exist for middle-class Hispanic workers.

“I don’t understand when people say, ‘you’re going after the breadcrumbs; nobody wants that.’ No,” Garcia says. He adds that his ideal client is someone like himself — the child of Spanish speaking immigrants, working a full-time job but without the thousands of dollars needed to open a brokerage account.

“When you combine it with inclusion and making sure you can talk to any person of any color, well, you can call that a niche, but we think that’s what all financial services should be doing,” Garcia said. “Whether the politicians like it or not, this is a diverse country. And if you’re not inclusive, you’re losing.”