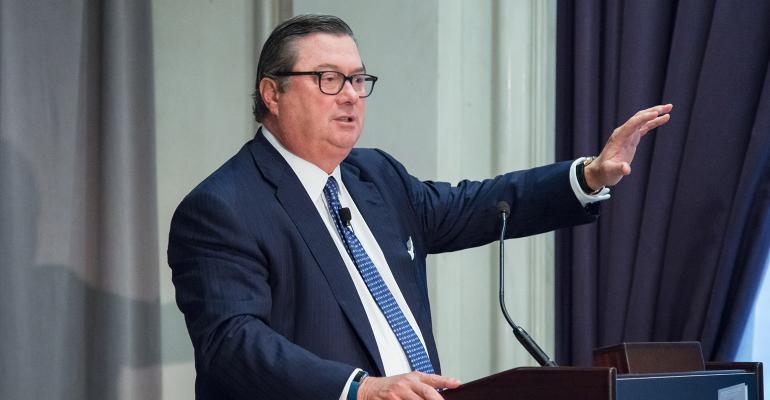 The Putnam CEO’s plan could lift annual retirement savings by nearly $700 billion a year within three years, according to EBRI projections.

Bob Reynolds, CEO of Great-West Financial and Putnam Investments, has a plan to address the nation’s retirement crisis, including extending access to payroll deduction savings to as many workers as possible, especially those in the gig economy, and spreading best practices and automatic plan designs across workplace plans. Reynolds outlined his plan at an event Monday morning in New York and in his new book, "From Here to Security: How Workplace Savings Can Keep America’s Promise," released this week.

Reynolds doesn’t believe the current system is broken, but the system should be built upon and improved.

“There is no need to reinvent the wheel here,” Reynolds said. “The public/private hybrid system we already have effectively diversifies income sources between human capital—through Social Security—and financial capital—through market investments by 401(k) plans, IRAs and other savings vehicles.”

His reforms could lift annual retirement savings in America by nearly $700 billion a year within three years, according to projections by the Employee Benefit Research Institute. The plan could reduce retirement savings shortfalls by about half for workers under the age of 50.

“You don’t need to throw out the system; you need to tinker with it, improve it, help employers set up plans, further encourage employees to make contributions and individuals who may be gig workers or contractors so we have broader retirement success,” said Harry Conaway, president and CEO of EBRI.

In the book, Reynolds argues for the need to close the “access gap” by providing workplace savings to all through legislation that would establish an automatic IRA program at the national level. About 40 percent of working Americans lack access to any payroll deduction savings plan at their jobs, and those workers stand to replace just 42 percent of their current income at median. Simply having access to workplace savings nearly doubles that income replacement rate at the median to 79 percent.

About five states are piloting programs to bring state-run retirement plans to private-sector workers, which Reynolds says is not the right answer.

“To allow states to set up plans without adhering to ERISA, which was put in place for a reason, provides an unfair advantage to the state and I think creates an unwielding potential because what’s to stop small plans that have qualified plans today from saying, ‘To heck with it. I’m just going to let them go to the state plan'? All the investment options are up to the individual state, and there has to be a national solution here,” he said.

“The ideal solution, I think, would be Congress goes ahead and says, ‘Yes, this is a good idea. We’ll put an umbrella on all of this and make it a national program,’” said J. Mark Iwry, nonresident senior fellow, The Brookings Institution, former senior advisor to the Secretary of the Treasury and deputy assistant secretary for Retirement and Health Policy at the U.S. Treasury.

There’s been some backlash against the state plans, Iwry said, because some argue having 50 different programs could make things inefficient for companies.

“It’s exaggerated because the programs are all aimed, as is the federal version, at the small employer who doesn’t have a plan yet, and typically they are in one state or another,” he said.

Tax reform is another hot button issue that could greatly impact retirement savers. Reynolds calls for larger and refundable Saver’s Credits, additional tax credits to employers who establish plans, and credits to part-time, freelance and contract workers who establish IRAs.

“Policy moves that cut into savings or reduce incentives will slow or stall future growth,” he said. “That’s an insight that should guide Congress and policy-makers generally as we consider changes in our tax code.”

Legislators are currently discussing whether to limit the pre-tax benefits of retirement plans.

“The people’s savings are not some honey pot for Congress to tap to pay for other tax cuts,” Reynolds said.

One of the problems is that Congress looks at tax expenditures on a 10-year window, considering taxes from retirement savings as lost from Treasury forever, when, in fact, those taxes are just deferred. In the book, Reynolds advocates for preserving and expanding all existing savings incentives and correcting the 10-year window used to account for the cost of savings deferrals.

“Just treating tax reform or changes in tax code in a static way—it’s a fine accounting mechanism, but it will almost certainly give you the wrong answer about the economic impact of taxes,” said James Pethokoukis, senior economic fellow at the American Enterprise Institute. “You want a tax code that encourages savings and encourages more investment over the long-term and not just look at these changes in how they’re going to fit in a 10-year budget window.”

The danger of complete “Rothification” is that fewer people would participate in plans, especially those with lower compensation, Reynolds said. He could live with a combination of the two, such as the first $9,000 contribution being pre-tax, with the next $9,000 being after tax.

“Going 100 percent Roth would be very detrimental to the system."

His plan also includes the adoption of automatic plan designs as the norm, including automatic enrollment and automatic escalation.

For workers with access to payroll savings plans, adding an automatic enrollment feature with an opt-out can raise their income replacement rate at the median from 79 percent to 92 percent. And automatic escalation lifts it up over 100 percent.

Social Security is also a massive problem that needs to be addressed. Twenty years ago, there were seven working Americans for every one person on Social Security; today it’s one to one.

Politicians need to make Social Security solvent for the long term, Reynolds said. That can be achieved through changing contribution levels or increasing the retirement age.

“This will require political courage, presidential leadership and a bipartisan willingness to compromise.”

Other aspects of his plan include the greater adoption of lifetime income options and the need for retirees to make tax-free withdrawals from qualified plans if they’re used to cover health insurance or medical care.