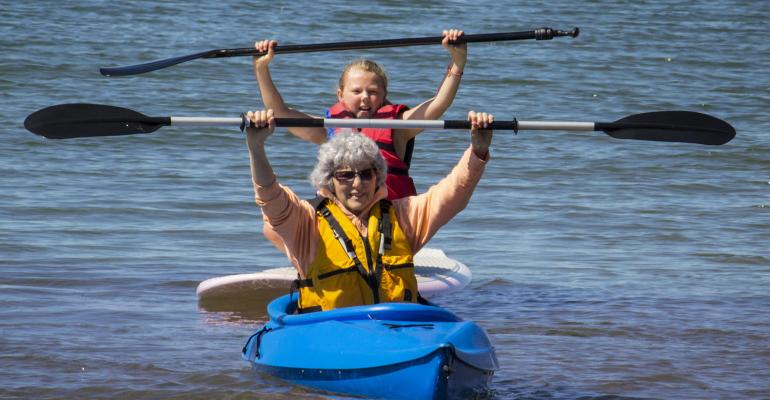 A Better Way to 'Live Forever,' Even for Nonbillionaires

The old and the young need to bridge the generational gap -- for both their benefits.

CHICAGO (Reuters) - Is there a cure for death?

Some Silicon Valley billionaires are looking for it—or at least a way to extend life spans dramatically, perhaps by hundreds of years.

One scientist sponsored a $1 million contest—the Palo Alto Longevity Prize—for researchers who can stop aging. Alphabet Inc’s Google has a business called Calico, also focused on extending life spans. Entrepreneur Peter Thiel, a cofounder of PayPal Holdings Inc, has funded anti-aging research and has even declared himself against death. “Basically, I’m against it,” he told a British journalist a few years ago.

Marc Freedman, however, has a more down-to-earth idea about immortality. The founder of the encore career movement has just published a wonderful new book called How to Live Forever: The Enduring Power of Connecting the Generations (Public Affairs). Freedman is aiming to kick-start a national conversation about ways that today’s older generation can live on through young people.

“Silicon Valley is trying to conquer the wrong problem in the wrong way,” he told me in an interview. “Real happiness comes from having a sense of purpose—and not defeating death, but accepting it and living accordingly. We need to accept and embrace mortality with the wisdom that we are a species that can live on not just literally, but by passing on from generation to generation what we’ve learned from life.”

Freedman’s organization, Encore.org, has played a key role over the past decade in promoting and developing the idea of encore careers - second acts for older adults focused on social purpose and innovation. Two years ago, Encore.org launched a major new youth-mentoring initiative called Gen2Gen, aimed at recruiting and mobilizing more than a million older adults to help young people thrive.

The campaign is working with government and nonprofit groups in seven cities around the country to expand opportunities for older adults to work with children and help them thrive. The focus typically is on issues such as childhood poverty, tutoring and mentoring. So far, the campaign has attracted 160 partner organizations, 1,100 grassroots leaders and a community of 71,000 supporters, Encore reports.

In his book, Freedman explores the intellectual underpinnings of the Gen2Gen campaign. And he gets specific about ways to do it.

“Older people need to get proximate to the young, finding ways to build contact with the younger generation into their daily lives,” he told me. “Start with housing—look for neighborhoods that have a mix of generations. Some older people I know have even sought out co-housing arrangements, because they knew it was a prime opportunity to connect across the generations.”

He also advises older people to think of common interests that bond generations together. “That’s the most reliable crucible for building bonds.” For example, he writes about a senior living facility in Cleveland that has an artist-in-residence program that provides free housing for graduate music students. “The older residents and young musicians frequently share a love of music, which provides the basis for deeper bonds,” he said. “Other people I know have become youth baseball coaches, school volunteers and chess mentors.”

But Freedman’s focus on older people as a resource also flips upside down the narrative about older people as a drain on society, and a looming intergenerational war. This is a recurring motif in U.S. media and public opinion—the notion that baby boomers are engaged in generational theft, spending down the nation’s resources on programs like Social Security and Medicare, leaving young people with a huge pile of debt and a bleak future.

Plenty of holes can be poked in the deficit and debt arguments, as I noted last week. Their proponents also falsely portray this spending in zero-sum terms—as though security in old age for your parents makes no difference in your own life.

But Freedman prefers a “glass half-full” approach. “I don’t want to be a Pollyanna about the challenges of the massive demographic shift that is coming—any change of this magnitude will require adjustment,” he said. “But I see these changes primarily as an opportunity to be seized, not a problem to be solved.”

Reporting and writing by Mark Miller in Chicago; Editing by Matthew Lewis