/sites/all/themes/penton_subtheme_wealthmanagement/images/logos/footer.png
Recent
Recent
Eight Must Reads for the CRE Industry Today (May 19, 2022)
May 18, 2022
Russian Billions Hidden in US Spur Backlash to Financial Secrecy
May 18, 2022
Mariner Wealth Advisors Expands in Michigan with Emerson Wealth Acquisition
May 18, 2022
Macquarie Alum’s GreenPoint Eyes $1 Billion for Real Estate Bets
May 18, 2022
Featured
The 10 Best and 10 Worst States in Which to Retire in 2021
Jul 15, 2021
Poll: 15 Classic Books on Investing and the Markets
Apr 03, 2020
Fifteen Must-Listen Business Podcasts for Advisors
Aug 14, 2020
Celebrity Estates: Jay Leno and Planning for Classic Car Collections
Feb 22, 2022
NAPA 401(k) Summit
brought to you by 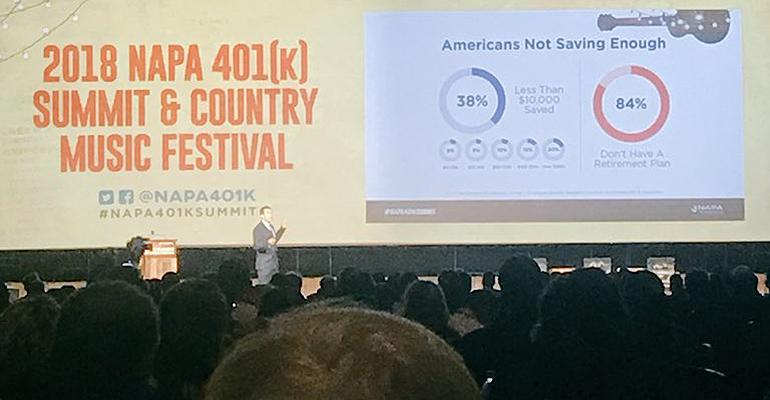 Until there were talks of changes, members of Congress didn’t realize the clout defined-contribution plans could have on the Hill.

Last year, a battle for retirement accounts was won in Washington, D.C., but a larger conflict on the Hill is brewing, according to Brian Graff, the CEO of the American Retirement Association and the executive director of the National Association of Plan Advisors.

Graff, a lobbyist who spends his days in the Capitol, asked a crowd of about 1,000 attendees at the NAPA 401(k) Summit not to “hate” him because of his profession. He said that, unlike annual conferences by other organizations, all of the funds raised by the summit are “supporting the mission of supporting our nation's [retirement] system ... and last year—a huge fight—we needed that support.”

“We had a great year last year but we’ve got some more battles in the future to deal with,” Graff told attendees.

Before Donald Trump was elected in 2016, he talked of making changes to the tax code, which observers knew could include meaningful changes for retirement accounts. When he won the election (the surprise of many), Graff said the possibility of tax reform suddenly became much higher, and he and others in the industry were on high alert.

In the months leading up to the overhaul of the U.S. tax code that ultimately became law, there was talk of converting some or all traditional defined-contribution plans to Roth-like plans. Dubbed “rothification,” the change would generate more tax revenue in the coming years and help offset corporate tax breaks—a pillar of the overhaul plan. Graff said one staffer claimed such a change could offset “3 percent in the corporate tax break.”

Graff said the American Retirement Association, which NAPA is part of, fiercely fought against such changes. He said it was the first organization to join the Save Our Savings Coalition, a group created in response to the tax overhaul that advocates for access to the private sector retirement system.

NAPA’s annual “fly-in” in July 2017—when retirement plan advisors go to Washington, D.C. to march and speak with legislators—also focused on the conversion of some or all traditional defined-contribution plans to Roth-like plans and had a major impact, Graff said.

After a report of a possible conversion was leaked to the press in October, Graff said the press pounced on it and shortly after Trump appeared to put the worries to rest in a tweet.

“There will be NO change to your 401(k),” Trump tweeted. “This has always been a great and popular middle class tax break that works, and it stays!”

There will be NO change to your 401(k). This has always been a great and popular middle class tax break that works, and it stays!

Graff said in the 48 hours after the reports of a conversion, it was the No. 1 issue people called members of Congress about.

“That was serious. They were really going to do this stupid idea,” Graff said. “The calls to the congressional office really spooked a lot of Republicans.”

The changes were ultimately left out of the tax overhaul and NAPA and others chalked it up as a victory, but Graff hasn’t buried his hatchet. “Just because we won tax reform, we’re not done,” he said.

However, now that the cat is out of the bag and those on the Hill have realized that defined-contribution plans can be used as political leverage.

“Since the beginning of this year, we’ve got rank and file members of Congress really interested in this,” Graff said. “The good news is that we won, and they now know this is an important issue.”