How Will the Securian Acquisition Change The Standard?

And what does it mean for the industry and their advisor and plan sponsor clients?

Forced by outside pressures and the need to achieve scale, the roster of almost 50 national defined contribution record-keepers (see list below) took another hit as Minnesota-based Securian decided to exit and sell its retirement division to Portland, Ore.—based The Standard, playing out the script outlined in the Harvard Business Review’s “Consolidation Curve.”

While still relatively small with The Standard adding $17 billion to its almost $30 billion in DC assets, it does show commitment to this market by The Standard’s parent, Japanese Yasuda Life, as prices have been reported to be as high as $1,000 per participant. Details of the transaction were not disclosed by AJ Ijaz, The Standard’s head of the Asset Management Group.

Both providers focus on the advisor-sold $1 million to $25 million market with few new capabilities or markets added because of the acquisition, which could mean reduction of costs and personnel, especially external wholesalers if the recent acquisitions of Prudential and MassMutual by Empower are any indicators.

Many deals in the past five years have been motivated by providers looking to add capabilities or expand markets like Empower’s acquisition of JPMorgan’s large market record-keeper, while the MassMutual deal bolstered its small market presence and provided access to union plans; Principal’s transaction to buy Wells Fargo cemented its large market presence; and John Hancock’s deal with New York Life allowed it to move up market. 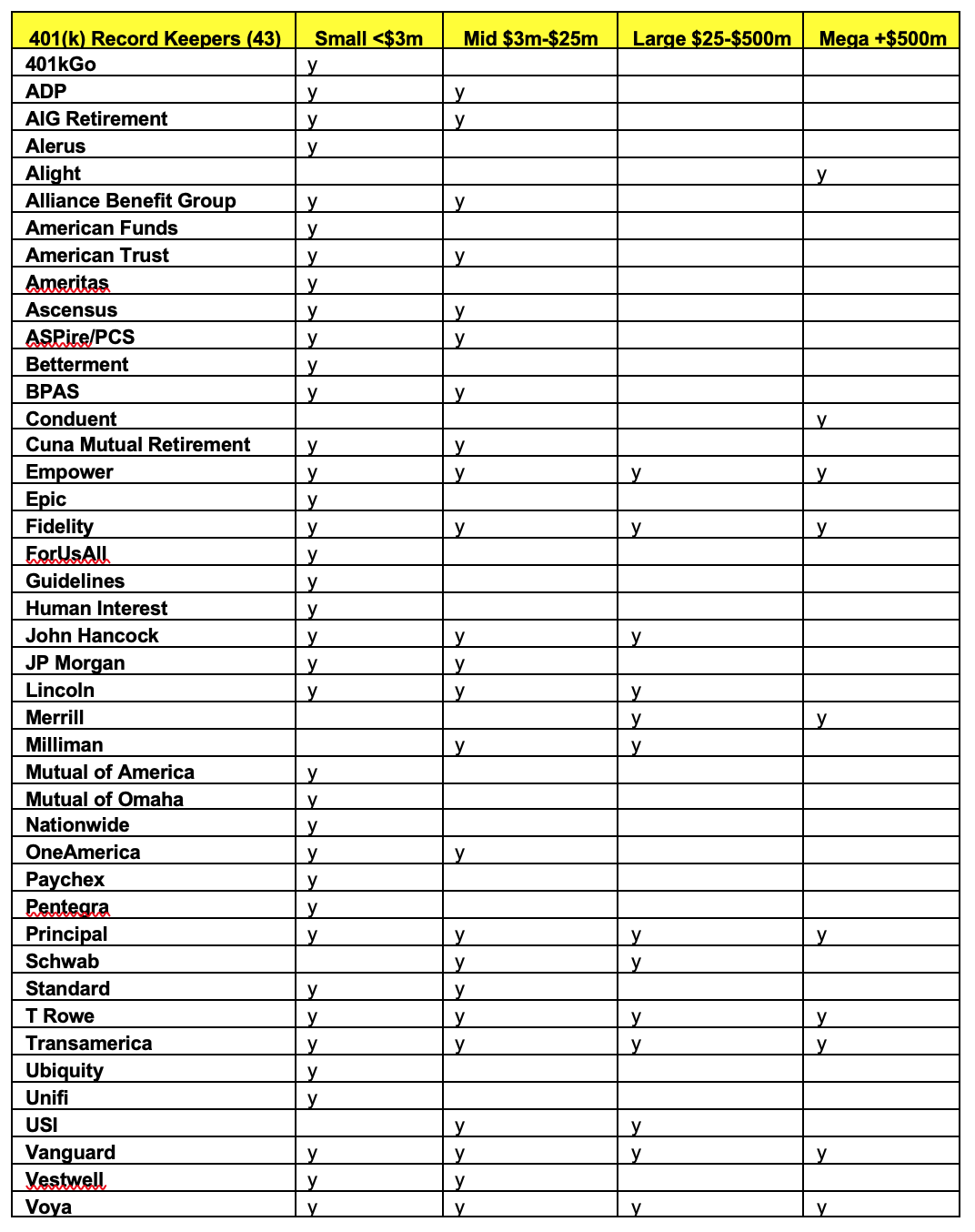 Though the deal “doubled in size” The Standard’s division, according to Ijaz, who declined to report assets, plans and participants under management by either company, he touted their “complementary capabilities” and culture.

Ijaz came to The Standard in 2017 and reportedly significantly reduced The Standard’s retirement staff after spending most of his career at Allstate Life & Retirement Agency Operations.

Acquisitions are hard to do well. Beyond technology integration, even with both The Standard and Securian on the most current versions of Omni, according to Ijaz, Securian’s plans will immediately come under attack by retirement plan advisors sure to remind plans that it is their fiduciary responsibility to conduct a full RFP. Neither company has much integration experience with The Standard’s last deal in 2006 when it acquired Invesmart, and Securian last purchased Pan American in 2003 and Allmerica in 2001.

And while the deal shows strong commitment to The Standard’s DC market—industry veteran Jason Burlie recently joined from Prudential as head of sales and Katie Sheliga is now the national accounts sales director—the competition is fierce as the Fab 5 each has over 10 million participants and at least $500 billion in plan assets while payroll providers like Paychex have over 100,000 plans. Though Ijaz claims that The Standard is “not trying to be a big five” provider, the reality is that its wholesalers will be competing with it on mostly every deal as well as other well-heeled providers like American Funds, Hancock and Transamerica.

And RPAs looking to winnow their roster of record-keepers that work with plans over $25 million will favor those that serve all markets.

There are internal reasons that many providers outside the top 10 to 12 will try to stay in the DC market if they can be profitable, like offsetting heavy reliance on other revenue sources. The Standard has a large disability group it acquired from TIAA in 2002, which surely has been under pressure due to the pandemic. Will someone like The Standard look to roll up other second- and third-tier record-keepers to compete with or sell to the Fab 5 at a premium? It would be a huge gamble, tricky to navigate but with big returns.

If even the Fab 5 realize they need to leverage participants and expand those capabilities as recently outlined by McKinsey’s Jon Godsall, which will further put pressure on plan-level fees just as RPAs are realizing, others like The Standard must follow or partner with advisors.

For advisors looking to protect their clients from the disruption that Securian plans will be experiencing, the question is not “Who’s next?” The better question is, “Who is not next?” For now, one answer is The Standard.