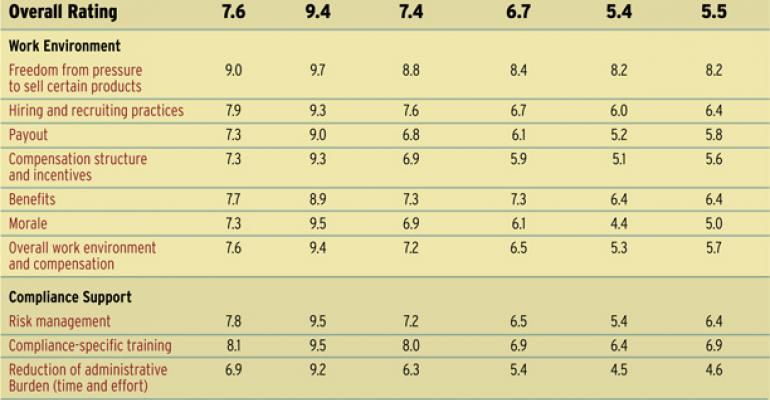 Registered Rep.'s 2009 Broker Report Cards: Then There Were 5

Thinking about changing firms? Before you do, get the real deal. Read the results of our 19th annual FA satisfaction survey to find out what FA employees really think about their firms.

This year'sRegistered Rep. Broker Report Cards show just how optimistic financial advisors can be. We don't need to remind anyone about the tremendous upheaval the popping of the credit/housing bubble created. And, yet, the marks FAs gave their firms were surprisingly solid — at least for all but Wells Fargo Advisors and UBS' Wealth Management Americas unit.

Despite a number of shotgun marriages (one or two that were unimaginable at the time), a sizable cohort of advisors felt the mergers were more positive than negative: At Merrill, 48 percent of advisors viewed the acquisition by Bank of America as positive, versus only 25 percent who thought it was negative (28 percent thought it was neutral). Meanwhile, among Morgan Stanley reps, 36 percent regarded the joint venture as positive, compared to 35 percent of Smith Barney advisors. Legacy A.G. Edwards reps, acquired by Wachovia in 2007, were least happy with their new mothership: 49 percent saw the acquisition as “very negative,” and 32 percent as “somewhat negative.” Among advisors from Wachovia, 40 percent viewed the acquisition as positive, compared to 32 percent who viewed it as neutral and 26 percent who regarded it as negative. (We hope Wells Fargo Advisors' brass is reading this.)

Further, and this surprised us, with the exception of UBS, the majority of financial advisors surveyed believed their firms to be the best. At Edward Jones, 98 percent said they work for the best firm; Merrill followed, with 78 percent; then came Morgan Stanley Smith Barney with 73 percent. Only 53 percent of Wells Fargo respondents said theirs was the best firm — UBS, well, perhaps we'd better not say. (Just a little over a third ranked their firm as the best.)

In fact, in aggregate, 89 percent of respondents say they will likely be at the same firm two years from now. Of course, those wirehouse FAs who accepted their firms' retention packages are pretty much married to the firm for an extended period, as some contracts have them locked in for as many as nine years.

Overall, this year's results found that for a second year in a row, reps gave the firms they work for a solid C: The overall score clocked in at 7.6, up two notches from 7.4 last year. This overall grade was pulled up by Edwards Jones' “A,” or overall score of 9.4. In fact, we might just start calling Jones, “except Edward Jones,” since the firm seems impervious to catastrophe. Jones reps gave their firm the highest overall rating this year, for the 17th year in a row.

Advisors' generally upbeat attitude is also reflected in their professed fondness for the wirehouse channel. Over half of our poll takers (55.3 percent) said wirehouses are the best firms to work for; 16.7 said regional firms, 8.9 said independent b/ds are best and a mere 1.9 percent said the much-vaunted fee-only RIA channel was No. 1. As for the hybrid model (where firms and FAs act as both Series 7 reps and Series 65 fiduciaries), just 8.8 percent considered that to be the best business model. Family offices and private banks barely registered a nod.

Survey data from Discovery Database, which tracks advisor movement, bear out these sentiments only in part. For the 12 months ending October 31, 24,441 reps changed firms; 40 percent of the movers were wirehouse FAs. Of those, 52 percent stayed in the wirehouse channel, in essence merely swapping one embarrassed organization for another. (Was it motivated by the need for upfront money? See page 69 for a related story.) Overall, as of October, there were 85,000 wirehouse reps, down from 97,000 in January, a 12 percent drop.

And yet, even as Discovery has found that fewer wirehouse reps moved as 2009 progressed, a greater percentage of those moving began ditching the channel for independence. Since July, only about one third of wirehouse movers have stayed within the wirehouse channel. In July, it was 28 percent; in August, 26 percent, in September, 30 percent and in October, 34 percent. The rest of wirehouse reps departed to institutional firms (20 percent), such as investment banks, VA distributors, clearing firms and the like, independent b/ds and RIAs (18), banks (14) and regionals (11).

Of course, wirehouses still dominate in terms of total assets and FAs. But RIAs and independents have picked up market share in both categories. By 2012, Cerulli forecasts wirehouse market share of AUM to fall to 41 percent (from 48 percent in 2008). Independents (RIAs and indie b/ds) are the expected beneficiaries.

In short, the battle for assets between the RIAs, the independent b/ds and the wirehouses is on. With Bob McCann tapped to revitalize UBS Wealth Management Americas (see related story on page 43) and with Sallie Krawcheck (a.k.a. Mrs. Clean) now at the helm over at Merrill, you can bet the wirehouse firms are going to put up a fight. Of course, in the end, advisors don't much care who is running the place. “I don't care who senior management is — unless they start messing with our payout grids,” as one Merrill rep said. “We just want to run our business in peace.”

A Word About Our Survey Participants

A majority of our respondents (43 percent) said they are primarily compensated by commissions, about a third (34) said they get paid in an even mix of commissions and fees; a quarter said they are fee only. On average, respondents have worked in the industry for 16 years, and with their current firms for 10 years.

For individual profiles of the firms, click through on the links below:

How This Survey Was Conducted

Registered Rep.'s sister company Penton Research conducted its 19th Annual Broker Report Card Study. Reps were randomly selected from the magazine's subscriber list. As in previous years, advisors were required to have at least one year in production at one of the five firms evaluated in the study. The research was conducted via the internet from October 7 to October 22. Sample sizes range from 67 to 385 by firm. The total sample size for all firms is 898.

Reps rated their current employers on 28 items related to their satisfaction. Ratings are based on a 1-to-10 scale, with 10 representing the highest satisfaction level. This year, new questions were added in order to measure how mergers and acquisitions affected reps‘ working lives. Reps were also asked how news coverage of their firms affected their businesses. In addition, advisors were asked whether the recession influenced them to shift core investment strategies, and if there were any products they planned to steer away from in the future. We also retained from last year a mortgage-related question on how write-downs affected FAs' relationships with clients.