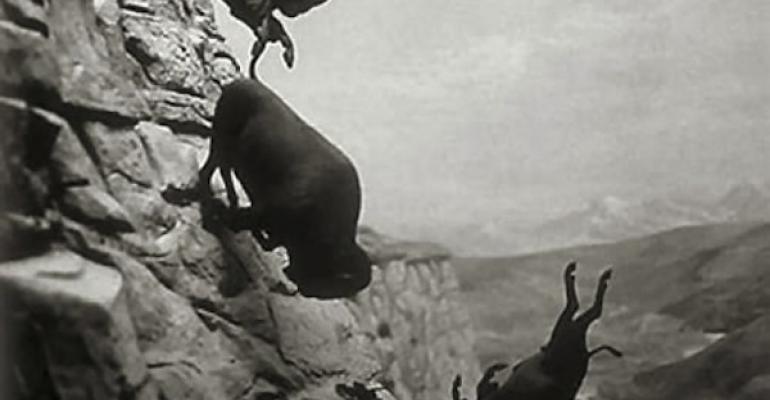 WealthManagement.com’s Advisor Confidence Index reveals advisors believe the market is due for a near-term pullback amid an economic recovery that remains fragile.

New York, NY—May 1, 2013 The WealthManagement.com Advisor Confidence Index (ACI), a benchmark of financial advisors’ views on the U.S. economy and the stock market, fell by 6.7 percent in April, a steep reversal after five months of increasing optimism. The ACI fell to 108.77, a level not seen since the beginning of the year, and the first decline in the monthly reading since November.

It was largely a steep drop in advisors outlook on the stock market that drove the falloff in overall confidence; that component of the index dropped 8.9 percent. “Stocks have gotten ahead of the economy,” said Bud Abbot of Family Endowment Partners. 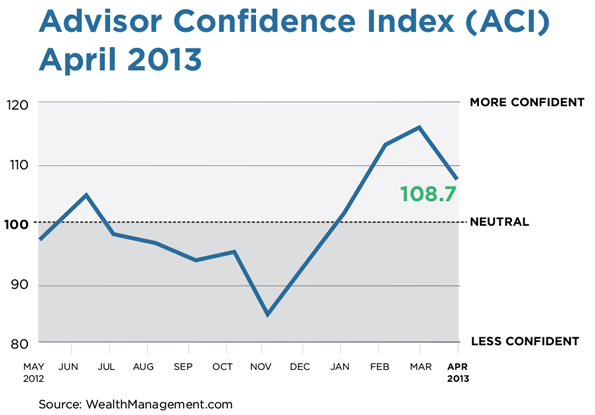 “The market has risen too fast and is poised for a pull back or correction,” said Edward Kohlhepp, an advisor in Doylestown, PA. Kohlhepp cited continuing problems in the Eurozone, fears of instability of North Korea and the U.S. deficit, among others threats.

“The market appears to be about ten to fifteen percent overvalued. Earnings are starting to trend downwards and it will likely have a snowball effect,” said Clint Walkner, with Walkner Condon Financial Advisors in Madison, WI.

While advisors are losing confidence in the near-term future of the stock market, many believe the economy overall is improving, albeit slowly. The component of the ACI that tracks optimism in the economy in twelve months fell by only four percent.

“$246 billion moved into US Stock and Bond mutual funds in the first quarter of the year, propping up stock prices even when the earnings fundamentals don't look so great,” said David Edwards of Heron Financial Group in New York City. “But we are anxiously optimistic. We think economic activity in the US and worldwide will build as the year goes on, so we believe stock prices will end this year even higher, even with an 5 to 7 percent correction along the way.”

“The U.S. is still the best neighborhood in a tough world, If rates rise, sovereign wealth will flow once again to the U.S.,” said Andy Knott of Wintrust Wealth Management in Chicago.  “Take the long view.”

About The Advisor Confidence Index Methodology

The Advisor Confidence Index is a benchmark that gauges advisors’ views on the economy. The ACI captures the views of a panel of more than 300 financial advisors, all of whom agreed to respond to the survey. The survey asks four questions – an advisor’s view on the economy, the economy in six months, the economy in twelve months and the stock market – on a scale from most pessimistic to most optimistic. The cumulative average is used to determine the index.