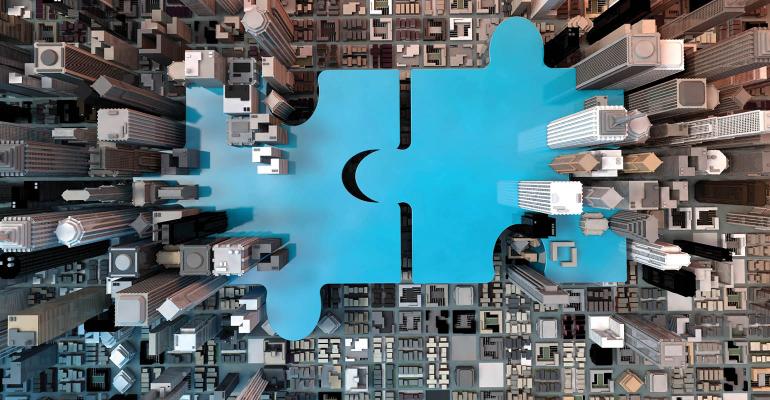 With plenty of capital looking for acquisitions and many REITs trading at discounts to NAVs, they make an attractive target.

Although small in number, REIT M&A deals in 2018 collectively hit their highest monetary mark since 2007. The one dozen transactions, either completed or announced last year, that were tallied by trade group Nareit approached $76.3 billion in value. Back in 2007, the value of such deals reached nearly $97.9 billion.

How will this year’s M&A activity in the REIT sector stack up against 2018? M&A observers believe the volume in 2019 will match or even exceed last year’s figure.

“While 2018 volume was significant due to many REITs being traded at a significant discount to their net asset value, we anticipate 2019 being similar. There are many investors and a great deal of capital waiting for the right time with values, cap rates and so forth,” Ross says. “The real estate fundamentals are very strong, with low unemployment, low interest rates and high consumer confidence.”

“Many of these funds are from investment managers that have deep experience taking public REITs private in the past,” Rothman says. “Given the large volume of dollars raised and the relative ease of putting capital to work in the public markets compared to the private real estate markets, we would not be surprised to see some of [the] funds pursue entire REITs, given the steep discounts some individual REITs trade at today.”

Public-to-private transactions accounted for about one-third of the REIT M&A deals last year, according to Nareit data.

As long as publicly-traded REITs as a whole keep trading at a discount to net asset value (NAV), the likelihood of large institutional investors—whether it’s a large publicly-traded REIT or a private firm with “a boatload of money” earmarked for a real estate fund—taking advantage of the arbitrage opportunity will remain high, says Patrick Healey, founder and president of Jersey City, N.J.-based financial advisory firm Caliber Financial Partners LLC.

However, Rothman points out that while the recent rebound in the share prices of publicly-traded REITs has broadly narrowed the discount to NAV, the core property sectors still trade at a discount.

“In some ways, the rally could be conducive to M&A, as boards and management teams can claim that they did not sell at the bottom,” Rothman says.

Which property sectors among REITs might see the most M&A activity in 2019?

Industrial and multifamily sectors and, to a lesser extent, the student housing sector will be the hottest ones for REIT M&A in 2019, according to Healey. In addition, he envisions some one-off opportunities in the hotel sector.

Meanwhile, Ross cites the industrial, self-storage, data center and multifamily sectors as the most likely candidates for REIT M&A activity in 2019, thanks to their economic attractiveness.

In its 2019 forecast, Nareit highlights the potential for the multifamily sector.

“There are shortages of both homes for sale and apartments for rent in nearly every major city, as there is pent-up demand from the housing crisis great enough to meet even the recent high levels of construction. New construction is being absorbed fairly rapidly in the months after projects are completed,” the Nareit forecast says.

The forecast also notes that supply constraints will spur further rent growth in the industrial sector.

“The industrial boom is far from over, as demand for logistics space rises with online sales,” according to the forecast. “Furthermore, there is less scope for new construction, as most of the large open spaces near population centers and transportation hubs have been developed.”

For his part, McCurrach foresees the possibility of several deals in the hotel REIT sector this year. Meanwhile, Rothman forecasts robust M&A activity in the office, retail and hotel sectors in 2019, given their discount to NAV compared with private market valuations.

“The net lease and healthcare sectors are trading at premiums, which makes them unlikely targets to be taken private. But it could result in these REITs pursuing acquisitions of large privately-held portfolios or companies,” Rothman says.

However, “predicting M&A activity is difficult, given the idiosyncratic nature of any merger,” he adds.