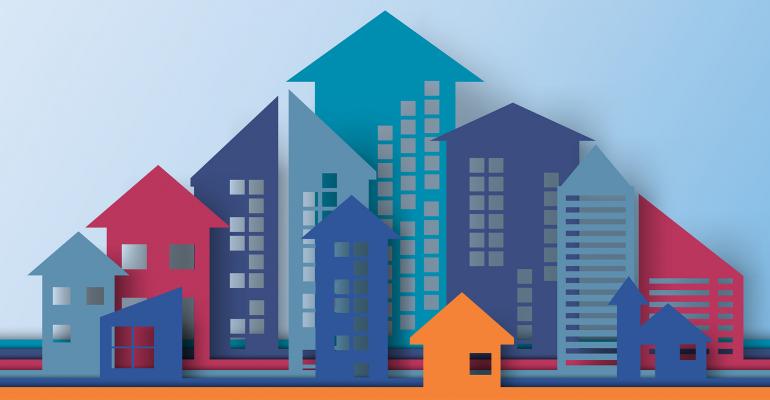 Vaccine-fueled optimism is driving recoveries in some of the hardest hit property sectors.

Strong rebounds among retail and lodging REITs helped propel FTSE Nareit All Equity Index total returns to rise 2.72 percent in February. Optimism about the increasing pace of vaccine distribution helped spur the continued rebound in the property sectors that have borne a disproportionate share of the pain from social distancing measures put in place throughout the pandemic that are now increasingly being eased.

In all, retail REITs posted total returns of 12.36 percent for the month, led by regional mall REITs at 17.78 percent. Shopping center REITs were up 15.31 percent and freestanding REITs were up 6.04 percent. Meanwhile, lodging/resort REITs were up 23.91 percent.

WMRE sat down with Nareit Executive Vice President and Economist John Worth to discuss February’s returns and what they mean for REIT prospects overall.

WMRE: REITs overall had a positive month. What are some of the takeaways drilling down into those numbers a bit?

John Worth: We continued to see the strong-performing sectors being the ones that were the hardest-hit in 2020. Lodging was up the nearly 24 percent. Retail was up more than 12 percent, led by malls.

It is consistent with the theme that we saw at the end of last year and that was emerging in January of a recovery of some of the hardest-hit sectors as investors are seeing a light at the end of the tunnel in terms of social distancing risk, improvements in the pace of vaccine rollout and expressing interest in sectors that have had a high social distancing quotient.

We also saw office REITs with positive returns for the month. The gain was more modest than retail and lodging. But office returns were up almost 5 percent, suggesting some positive momentum in terms of work-from-home risk.

In terms of the vaccine, with the recent announcement of the U.S. having full coverage by May, there remain risks in execution and getting those out to folks. But it certainly seems like a more optimistic trajectory than a month ago or even a week ago.

WMRE: It has now been more than a year since the market first began reacting to COVID-19. What does analysis of that full year show?

John Worth: When you break up the one-year period, you really get some of the very dramatic shifts and how they changed across sectors.

There was a first period from Feb. 21 to March 23, where we saw a precipitous drop in stock prices and REIT stocks. REITs were down 42 percent as investors were trying to wrap their heads around what the implications of COVID were going to be across the sectors. During that period, every sector fell. But most dramatic was retail was down 50 percent, highlighted by malls down 62 percent. And lodging REITs were down more than 56 percent. All the sectors were down significantly as we saw a broad sell-off in real estate and the stock market more generally.

Then we saw this period from late March to November 8. In that stretch, returns were up 42 percent. It was led by industrial/logistics, data centers, cell phone tower REITs and self-storage also did quite well. This was a bounce back for real estate driven by the non-social distancing, digital economy sectors.

Then the last third is the most interesting. It started Nov. 8 and has been a vaccine-driven recovery. Since then, REIT returns are up 11.5 percent. But here we see the leaders being retail and hotels. Hotels have risen by 72 percent and retail REITs are up 45 percent, highlighted by malls up 77 percent.

If you look over the full year, it’s timber, self-storage, industrial and data centers. And the worst performing, surprisingly, is offices. Office REITs were caught in the downdraft, but have not had the same recovery as retail and hotels.

I would not have predicted that office would have worst performance of the 12-month period. That underscores that while the retail and hotel [REITs] have COVID and social distancing risk priced in, the work-from-home risk is not resolved purely by the distribution of vaccines. That’s really where investors are debating what are going to be the meaningful permanent effects.

WMRE: That is surprising. It does seem like companies are going to be more flexible about offices even coming out of COVID-19, but I’m hesitant to think the question is fully settled on what the balance will be between remote and having people in offices at least some of the time.

John Worth: I think it will be an evolution as companies try different models. My own take is that having a full remote workforce is tough on cultures and organizations. But the single biggest question mark is around this issue of which of our behavioral changes are going to be permanent and which are going to be transitory.

In hotels, people can look at their own behavior and they are excited to travel. Personal travel will come back first. And business travel will pick up later in the year. We may not get to pre-COVID [levels] quickly. But it will come back in a meaningful way. With retail, we already see that if you open stores and restaurants, people will return. That will only get stronger.

With offices, it’s a more serious debate. What will the work-from-home impact be on demand? It won’t drive demand to zero. Even with a hybrid model, you need meaningful amounts of square footage. There’s also the question as to what it will cost the organization in terms of culture by not bringing people together.

The way culture gets communicated and integrated is not by watching a webinar. It’s spending time with people and soaking them in. It’s especially important for junior level employees.

WMRE: We are also wrapping up the earnings season for REITs. What patterns emerged in those results?

John Worth: Funds from operations (FFO) rose over 11 percent from last quarter. It’s the second consecutive quarter with an increase in FFO. Year-on-year FFO is still down 16 percent, but REITs are on a recovery trajectory.

There were also some real signs of optimism in what management teams were saying on earnings calls. Most are viewing the latter half of 2021 as having a greater sense of normalcy, with earnings returning to a normal pace.

And it’s not just rhetoric. REITs are acting on that view. In the quarter, net acquisitions increased by $10 billion over the previous quarter. In fact, it was the highest level of REIT acquisition activity in one-and-a-half years. Industrial, retail, healthcare and self-storage REITs were all acting on that positive outlook by acquiring properties.

In addition, even in this period of distress, we saw that REITs were able to keep debt levels low. Leverage ratios are still below where they were before the Great Financial Crisis and interest expenses are at 21 percent of net operating incomes. REITs came into the COVID crisis positioned for resilience and they’ve been able to maintain that.