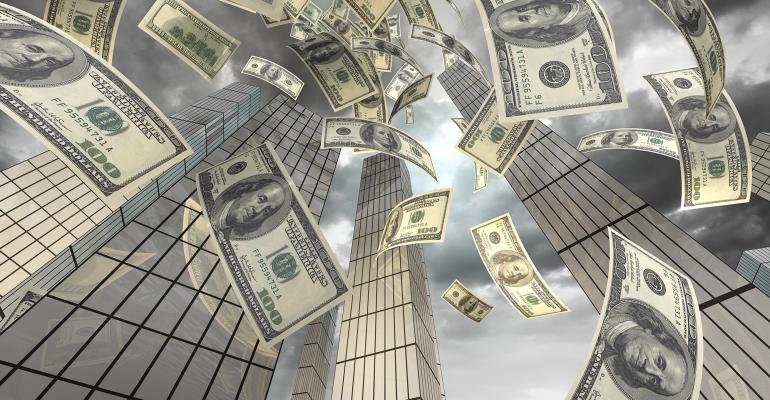 Non-Traded REIT Fundraising Could Surge to $15B in 2021

The vast majority of new capital is going to non-traded REITs operated by the Blackstone Group.

Capital flows into non-traded REITs appear poised to leap higher following what has been a rollercoaster year of fundraising.

The latest industry research from Robert A. Stanger & Co. points to a strong rally in fundraising in December and January that is setting the stage for continued flows throughout 2021. Although fundraising ended the year 8.5 percent below that of 2019 at $10.8 billion, Stanger is forecasting strong momentum that could lift fundraising to $15 billion in 2021.

Fundraising took a hit last spring and summer due to uncertainty on how the pandemic might impact real estate values. Real estate values generally lag broader moves in the economy. In addition, the way that one popular category of non-traded REITs work, NAV (net asset value) REITs, is that shareholders are admitted on a monthly basis with an NAV that is usually derived from the prior month’s valuation. So, someone investing at the end of March, for example, is investing based on an NAV that was established at the end of February. During 2020 “there was concern about whether that was the right valuation in light of how rapidly things were changing at the time,” says Trisha Miller, executive managing director of Robert A. Stanger & Co. and chair emeritus of the Institute for Portfolio Alternatives.

Fundraising dropped sharply in March and hit bottom in May with a sparse monthly total of $245 million—a fraction of the $2.4 billion raised in January and February 2020. Fundraising started to gain more traction in the fall as people gained confidence in real estate values, climbing to $840 million in November and almost $1.1 billion in December. That momentum carried over into January with another $1.1 billion in capital flows, according to Stanger.

Concerns about the effects of the pandemic on the economy and real estate performance have not fully dissipated. However, the non-traded REIT sector does have some wind at its back along with the rollout of the vaccine and people getting back to work. “The biggest tailwind today is the demand for yield. The broader investment community, especially in the high-net-worth private client area, is yield starved,” says Allan Swaringen, president and CEO of JLL Income Property Trust. Core real estate, historically, has been a great source of income. So, non-traded REITs are attracting capital from investors looking for a good, reliable source of income without the volatility of the stock market, he adds.

Non-traded REITs are often used by investors as an alternative to fixed income investment products. “If you are able to offer above market income in an asset class that is viewed as relatively stable with a hard asset behind you, such as private real estate debt, that’s seen as really valuable,” agrees Matt Malone, managing director, Real Estate at FS Investments. For example, FS Investments’ non-traded REIT, the FS Credit REIT, is currently generating a 7 percent yield on its I Share.

People also are getting more comfortable that the market dislocation is a temporary situation and things seem to be moving in the right direction, adds Malone. “In early 2020, investors stayed on the sidelines because they were worried about what was going to happen with the real estate market generally,” he says. However, investors recognize that the impact has been more nuanced with some sectors within real estate that are still really strong, and other that are more challenged. In addition, there is recognition that even within some of these less loved sectors there are still investment opportunities. Grocery-anchored retail, for example, has been very resilient, he adds.

Another factor that has attracted capital back to non-traded REITs, and in particular the popular NAV REITs, is investment performance and resiliency in a downturn. The daily NAV REIT structures have emerged over the past several years, meaning that they have not been tested by a downturn. “Performance across the sector was quite strong through this downturn and through the pandemic induced recession of 2020,” says Swaringen. Broadly speaking, sponsors continued to pay regular dividends and meet liquidity and repurchase demands, he says. “That is a great testament to the overall sector, and I think you will see stronger capital flows, because we have now shown how we can perform during a downturn,” he adds.

Although, the rebound in fundraising is positive for the entire sector, the vast majority of capital is directed at the Blackstone Group. The company captured 72 percent of the market share in 2020—roughly $7.8 billion, according to Stanger. To its credit, Blackstone was well positioned going into the pandemic as it was heavily weighted in industrial and multifamily— both of which are sectors that are outperforming and in demand from investors these days.

The numbers Blackstone generates may be staggering, but most sponsors view the addition of Blackstone as a positive for the industry as a whole. “Blackstone coming to the space has given non-traded REITs a boost in terms of broader acceptance,” says Malone. In addition, the flip side of raising high levels of money is that it needs to be put to work quickly in order to be fully invested and avoid cash dragging down portfolio performance, he adds.

Blackstone’s success also highlights the important role that wirehouses such as Morgan Stanley and Merrill Lynch play in the sale of non-traded REIT stocks. “The key to fundraising right now is really having the wirehouses. You have to be in the wirehouses if you want to raise a substantial amount of capital,” says Miller. The wirehouses are responsible for 70-80 percent of the money going into NAV REITs today, and the two products with the widest distribution in the wirehouses are Blackstone and Starwood. One challenge for smaller REITs is that it is hard to get on to the wirehouse platforms as they tend to have limited menus of products, and they tend to like the big institutional managers, she adds.

Like many non-traded REIT platforms, FS Investments uses a three-channel distribution model that includes wirehouses, RIAs and independent broker dealers. “Although the wirehouse advisors are really moving the needle for the NAV REIT products today, we see advisors across all channels needing differentiated income solutions for their clients,” says Malone. In addition, the wirehouses are still in the early days of putting NAV REIT product offerings on their platforms. “They control a lot of capital. So, I would expect their presence and expansion of distribution to continue to drive sales,” he says.

Going forward, a number of NAV REITs are looking to attract capital from foreign investors. One of the ways that is occurring is through fintech firms, such as iCapital and RealBlocks. “They have technology-driven platforms that make accessing foreign capital, and all of the local restrictions and responsibilities for suitability and knowing your clients, more efficient and more accessible,” says Swaringen.

Another important evolution for NAV REITs is more data sources that are tracking NAV REIT performance. For example, Stanger and the IPA launched a non-traded REIT performance index last year. Swaringen also is working with Nareit on also tracking performance data and developing a separate index for NAV REITs. “So, two areas of interesting growth will be attracting foreign capital and the evolution of industry benchmarks, which will help to attract new investors to the sector,” he adds.