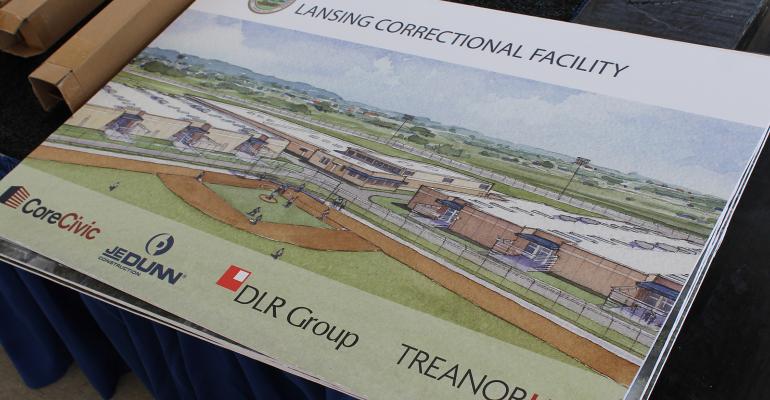 How One Private Prison REIT Is Trying to Diversify

CoreCivic Inc., an operator of private prisons and immigration detention facilities, wants to diversify its portfolio.

“We’re used to maintaining properties, often complex properties, and so we thought, ‘Where else could we expand our footprint and grow the business that makes sense for what we do—the common thread being doing business with government?’” says Cameron Hopewell, managing director of investor relations at Nashville, Tenn.-based CoreCivic.

Today, corrections facilities owned and operated by CoreCivic represent 85 percent of NOI, with the vast majority of those being prisons used by state and federal agencies and the remainder being detention centers used by U.S. Immigrations and Customs Enforcement (ICE). The remaining 15 percent includes government-leased properties and re-entry facilities, such as halfway houses and substance abuse treatment centers.

David Garfinkle, the REIT’s executive vice president and chief financial officer, says that by the end of 2020, CoreCivic aims to shave that NOI share to 75 percent for corrections facilities, and collectively increase the NOI share to 25 percent for its two other business segments.

That strategy aligns with the 2016 rebranding of Corrections Corporation of America as CoreCivic as part of the REIT’s goal “to transform our business from largely corrections and detention services to a wider range of government solutions,” Damon Hininger, the company’s president and CEO, said in a news release.

With a companywide portfolio encompassing more than 17 million sq. ft.—including over 14.5 million sq. ft. at 44 corrections and detention facilities it owns and another seven that it manages—CoreCivic promotes itself as the country’s largest owner of real estate occupied by government agencies. Critics, including civil rights groups, repeatedly note that CoreCivic reigns as one of the largest U.S. operators of private prisons.

In its effort to diversify, the REIT has been scooping up non-corrections assets. In August 2018, for instance, CoreCivic paid $242 million for a 540,566-sq.-ft. office building in Baltimore that’s fully leased by the Social Security Administration. Garfinkle calls the Baltimore building a “trophy asset” and says it doesn’t reflect the type of government-leased properties that CoreCivic is pursuing outside the corrections sector.

Rather, he notes, the REIT is going after government-leased, value-add properties that are not on the radar of big institutional buyers, but might appeal to high-net-worth investors (HNW), medical practices and dental groups. These properties may be due for renovation or expansion—upgrades that HNW investors, medical practices and dental groups might not have the resources or appetite for, he says.

“We’re being judicious in what we look at,” Garfinkle says. “We’re looking for the diamond in the rough or the niche asset.”

“Diversification is key in any business because it serves as a statistical and practical hedge, or insurance, against unforeseen circumstances,” Holzmann says. “Let’s face it: if everyone knew exactly what is going to do well, everyone would invest in it. By the same token, if everyone knew what is about to fail, they would not be investing in that.”

“The reality is that there is so much we don’t know, can’t forecast and often can’t effectively protect against,” Holzmann adds.

In the name of diversification, CoreCivic is also boosting its involvement in public-private partnerships in the prison sector.

A prime example is CoreCivic’s $362 million deal, finalized in January 2018, to build a replacement for the Lansing Correctional Facility in Lansing, Kansas, the state’s largest prison for men. The Kansas Department of Corrections will operate the new 2,432-bed, 400,544-sq.-ft. prison—being constructed at a cost of $155 million to $165 million—under a 20-year lease-to-own agreement with CoreCivic. The current 2,405-bed prison dates back to the 1860s, when President Abraham Lincoln lived in the White House. The new facility is scheduled to open in 2020.

Hininger, the CoreCivic president and CEO, hailed the Lansing project as “our industry’s first development of a privately-owned, build-to-suit correctional facility to be operated by a government agency through a long-term lease agreement.”

While CoreCivic has undertaken ways to diversify its portfolio, the REIT isn’t taking its eye off its main revenue source—corrections and detention facilities that it owns or manages. CoreCivic posted nearly $1.84 billion in revenue in 2018, up from almost $1.77 billion in 2017. More than 90 percent of last year’s revenue came from what the REIT dubs its “safety” business, made up of corrections and detention facilities.

Among the federal agencies that house people in CoreCivic facilities are ICE, the Federal Bureau of Prisons and the U.S. Marshals Service. ICE has been at the center of an ongoing societal tug of war over how to handle migrants, many of them seeking asylum, who cross into the U.S. from Mexico.

To be sure, CoreCivic’s prominent role in the private-prison sector hasn’t come without some hurdles, including ones related to lending.

For one thing, the REIT’s executives noted, JPMorgan helped finance construction of the replacement for the antiquated Lansing Correctional Facility. Garfinkle says he’s not sure whether the Lansing deal could have been completed without JPMorgan’s assistance.

“It is further disappointing that decisions like this are being based on false information spread by politically-motivated special interests, who completely mischaracterize our company and the meaningful role we play in solving some of our country’s biggest challenges,” the company’s statement added. “In reality, CoreCivic helps keep communities safe, enrolls thousands of inmates in re-entry programs that prepare them for life after prison and saves taxpayers millions.”

CoreCivic executives insist the REIT has been unfairly hammered—by activists, politicians and others—for doing business with ICE. They stress that children who lack parental supervision are not housed at any of the six immigration detention centers that CoreCivic runs solely for ICE.

A key target of complaints over the housing of migrants is CoreCivic’s 2,400-bed South Texas Family Residential Center, the biggest immigrant detention center in the United States. A Texas Public Radio story in December 2016 branded the “immigrant jail” as a “cash cow” for CoreCivic. Also in 2016, one journalist mockingly labeled the facility “a kinder and gentler way of interning women and their children.”

Hopewell says the facility helps “quickly and efficiently process families into the asylum process in a very safe, humane, appropriate setting.” He goes on to say that the media regularly misrepresents conditions at the South Texas detention center.

“We think we have a very good story to tell on the immigration side. What we’re doing is we’re helping a federal agency do more than they could otherwise do themselves,” Hopewell says.

In response to concerns that the South Texas center engages in the separation of migrant children from their families, Garfinkle notes that the facility, which opened in 2014, “enables mothers to stay together with their children. It was purpose-built for this population in order to keep families together.”