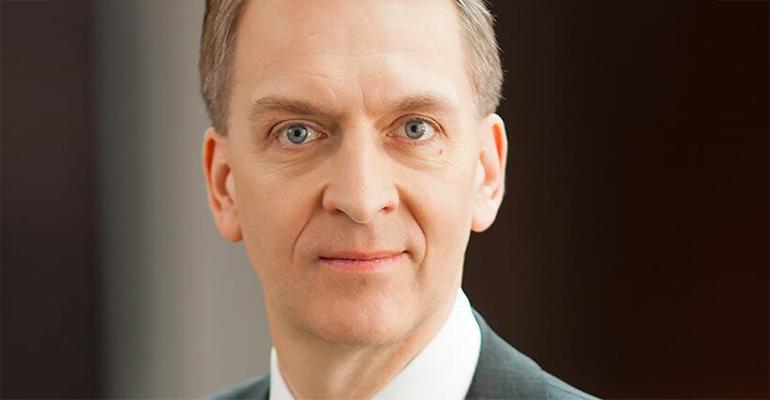 Brookfield Worth 40% More Than Its Current Price, CEO Flatt Says

Bruce Flatt said in a letter to shareholders Thursday that he believes the true value of the company is closer to $57 a share.

(Bloomberg)—Brookfield Asset Management Inc. ended 2020 with a record quarter and $602 billion in assets under management, but the head of the alternative asset manager said he believes its shares are undervalued.

Bruce Flatt, Brookfield chief executive officer, said in a letter to shareholders Thursday that he believes the true value of the company is closer to $57 a share, or roughly 40% more than its closing price of $41.02 on Wednesday.

“Price is a function of supply and demand at any point in time, which is often influenced by the news of the day, short-term results, and the investor view of macro events that often have nothing to do with the company,” Flatt said in the letter. “This has always been true, and is even more so today with the emergence of ETFs, indexing, social media, the 24-hour news cycle and all the information bombarding investors.”

2020 is a case in point. While Brookfield’s investors may have only seen a total shareholder return of roughly 8% last year, the value of the company - taking into consideration future cash flows, growth assumptions and reasonable interest rates - actually rose 17%. He said if Brookfield were a private company, investors would have been thrilled by the increase in value.

“The movement of price often distracts investors from focusing on the value of a business. We encourage you to focus on value and try to not be distracted by price,” he said.

That said, the dislocation between the price ascribed to a stock and its underlying value does create opportunities. Brookfield is currently pursuing two hostile bids, including trying to take to its own real estate arm, Brookfield Property Partners, private.

“Property securities show no signs of trading near their intrinsic value,” Flatt said Thursday. “This is simply a classic example of assets not being what public market investors currently wish to invest into.”

To be sure, investors have plenty to be concerned about. Brookfield Property Partners posted a $2 billion loss last year as the coronavirus outbreak kept many offices and malls closed for most of the year. Flatt said taking the portfolio private would give Brookfield the flexibility to unlock its true value by redeveloping, selling, and building new assets over the long term.

“Although the immediate impact of the transaction will be an increase to the size of our balance sheet, this will quickly reverse, and we expect that over the next five years we will end up with fewer real estate assets than we have today,” he said.

On Wednesday, Brookfield’s infrastructure arm made a C$7.1 billion ($5.6 billion) hostile bid for the rest of Canada’s Inter Pipeline Ltd. that it didn’t already own. Inter Pipeline confirmed it had received a unsolicited, non-binding bid in the range of $17 to $18.25 per share, which it said was rejected because it didn’t reflect the value of the company. Brookfield said in a statement it was open to increasing its offer subject to due diligence.

While not addressing the Inter Pipeline bid directly in the letter, Brookfield’s Flatt did offer some explanation as to why the firm continues to invest in assets, like pipelines, which seem to be at odds with its push into environmental investing.

“We will continue to own and operate certain essential infrastructure assets globally that transport fuel,” he wrote. “We believe that natural gas will play an important role in this energy transition, particularly in Asia, and potentially serve as a bridge to hydrogen.”

On Wednesday Brookfield said it plans to raise at least $7.5 billion for a new climate-focused fund. The company itself plans to contribute $2 billion to the so-called Brookfield Global Transition Fund, Flatt said Thursday.

Brookfield also reported a net income Thursday of $1.8 billion in the fourth quarter, up 11% from the previous year, and a record funds from operation for the quarter of $2.1 billion, up 75% year-over-year. The company also increased its dividend by 8%.