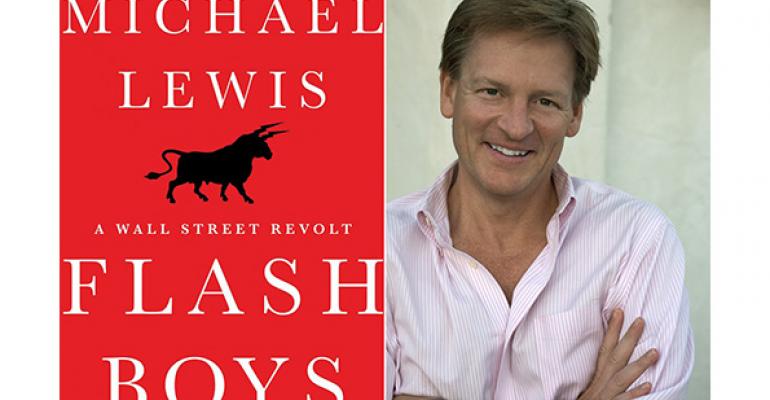 What Would Michael Lewis Do? Let’s Ask Him

This article has been republished from LinkedIn.

The language of finance is complicated, and sometimes intentionally so. From the “turgid dialect” of Fedspeak to the intentionally tortured and complicated mouse print disclaimers on investment prospectuses, the industry embraces verbosity.

So when a New York Times best-selling author appears on 60 Minutes to declare that the stock market is “rigged,” it stands in stark contrast to the usual hedging, sidestepping and equivocating.

Michael Lewis’s latest fete of fast-paced storytelling, “Flash Boys: A Wall Street Revolt,” centers on one of the industry’s technological advances: high-frequency trading (HFT), which is responsible for more than half the trades that occur in the stock market every day.

Plenty of industry experts and insiders contend that Lewis’s tale is an overly simplistic take on an entangled corner of the market. In an attempt to make the story of hundreds of thousands of “robot computers” buying and selling stock compelling for a broad audience, nuance is lost. They argue it’s not clear if Lewis’s heroes, villains and victims are universally acknowledged.

But the complexity of the system and its network of participants is the point. As Lewis himself said in recent interviews, if it’s so complicated that the average person can’t understand it, then how can they think to ask any questions about it? How do they know which side of the story they fall on?

It’s the same argument that was made in the wake of the subprime mortgage crisis—the loan language was so opaque that people didn’t understand what they were signing. And it’s the same problem investors have faced when trying to find an appropriate financial professional to guide them.

For those brave enough to peek behind the curtain, or dive into the dark pool as it were, Lewis has provided more than just cocktail chatter. He has brought to light systemic issues in the financial industry, where trust and transparency—core to every other customer-centric business on the planet—are routinely sidelined for even the suggestion of greater profit.

DISCUSS: What would you ask Michael Lewis? Tell us on Twitter using the hashtag #AskMichaelLewis

“Flash Boys” speaks to the broader issues of how the industry uses technology to gain competitive edge. There’s nothing illegal about HFT firms utilizing speed to process and act on information that’s available to everyone. Their “edge” creates theoretical efficiency, but more practically, it generates profits for the traders. But it also has enormous, unprecedented power to move markets, as demonstrated by the Flash Crash of 2010.

If HFTs went away tomorrow, some other disruptor would come in to take their place. While the SEC and the FBI and the New York State Attorney General jostle to solve these issues through new rules and regulations, which are likely to create another slew of rules and loopholes, the rest of us should embark on a conversation about the fundamental utility of the market. We should have an honest debate about what it means to level the playing field, and is it possible to restore confidence.

On Wednesday, May 21, I have the opportunity to sit down for a conversation with Michael Lewis at HighTower Apex, our first-ever industry-wide conference. While I can’t promise we’ll revolutionize the financial industry during our time together, I can guarantee that we will tackle the tough issues in as candid and straightforward a manner as possible.

I invite you to leave your questions for Mr. Lewis in the comments. Let’s put innovation into action—starting now.

Elliot Weissbluth is the Chief Executive Officer of HighTower, a national, advisor-owned financial services company serving high net worth and institutional clients. Prior to co-founding HighTower, he was the President of US Fiduciary, a boutique broker-dealer, and Director of Marketing & Research at RogersCasey, one of the nation’s leading investment research and institutional Registered Investment Advisory firms.