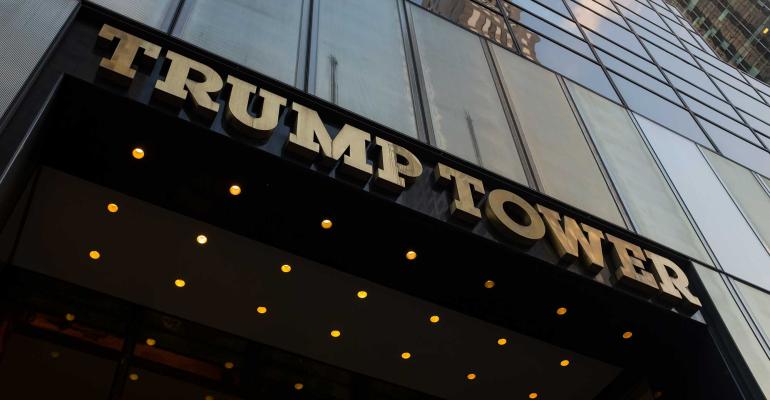 Depreciation, debt write-offs, tax credits and other measures are among the tax avoidance benefits inherent in the sector.

It may seem like a lifetime ago, but before news of the ongoing COVID-19 outbreak involving President Trump, White House staffers, Republican politicians and others, the New York Times stirred up a political firestorm surrounding President Trump’s personal finances with a new investigation revealing a staggering amount of business losses over the past two decades. The headline grabber was that he paid just $750 in personal federal income taxes in 2016 and 2017 and nothing in 11 of the 18 previous years. Additionally, the article said he claimed a total of $1.4 billion in losses from his core businesses for 2008 and 2009 and collected a $72.9 million refund for the 2010 tax year.

The article is just another chapter in the ongoing saga of President Trump’s personal tax returns, which he has chosen not to release to the public as most political candidates have done in recent decades. The New York Times piece amplified earlier reporting it had done in 2019 alleging that President Trump had reported $1.17 billion in losses from 1985 to 1994. As with those findings, the new revelations have put the tax benefits of commercial real estate ownership firmly in the spotlight.

President Trump has said publicly that he has paid millions in taxes, including property and payroll taxes. At the same time, he also has been candid in admitting he has utilized tax credits, deductions and real estate depreciation to offset income. For example, the Trump Organization received $40 million in Federal Historic Tax credits for its 2014, $200 million renovation of the Old Post Office just blocks from the White House into the 272-room Trump International Hotel on Pennsylvania Avenue.

The ability for commercial real estate owners to substantially reduce or even fully negate their federal income taxes is not unusual. The reality is that investors frequently use operating expenses, mortgage interest deductions and depreciation to offset rental income, as well as applying tax credits to further lower tax obligations.

As a simple example, an owner of an office building collects $500,000 in annual rental income. On the deduction side of the ledger, the owner can claim $300,000 in mortgage interest deduction for leverage on the property, $250,000 in depreciation and $150,000 in operating expenses. In this case, the taxpayer recognized a $200,000 operating loss for the year for tax purposes even though they had positive cash flow of $250,000 from the depreciation.

“The tax code is a very complex set of rules and there are court cases that could fill up a building with all of the paperwork,” says Thomas D. O’Rourke, a partner at Haskell & White LLP, a public accounting and advisory firm based in Irvine, Calif. “However, when you break it down to a very simple approach to a real estate investor who could have massive amounts of depreciation and leverage, that is the real estate dream—tax deferred consequences with current cash flow and then when you die, there is a step up in the tax basis of the value when assets transfer to heirs,” he says.

Commercial real estate investors who use deductions to offset taxable income is a common practice. “My focus is primarily on privately held real estate companies, their owners and families that own them, and it is standard practice to have a structure that provides these benefits,” says O’Rourke. A homebuilder or house flipper doesn’t have the same tax advantages as they are viewed as a dealer, but real estate investors who are invested in private partnerships or structures do get a lot of flexibility to get allocations that are tax beneficial, he says. “It’s not cheating, it’s just the law,” he says.

Making the most of deductions

Taking advantage of tax code to reduce or avoid taxes is certainly not a strategy unique to President Trump. However, CRE does offer opportunities for some unique tax breaks.

“Owning commercial real estate is one of the greatest vehicles to not only build wealth but also to shelter it from taxes. With things such as depreciation, cost segregation, mortgage deductibility, 1031 exchanges, and opportunity zones, there is a ton of completely legal ways a commercial real estate owner can make money in commercial real estate, while still showing a tax loss,” says A. Yoni Miller, co-founder of CRE financing firm QuickLiquidity.

Tax legislation following the Great Recession created some additional tax breaks for investors who suffered losses during the downturn. One of the spigots that opened in 2010 was that provisions regarding net operating losses extended the carry back on losses from two years to five years. It was likely that change that opened the door for President Trump to claim additional tax losses that contributed to his securing a multi-million-dollar refund in 2010. However, the refund also means that Trump had to have paid a significant amount of taxes at some point in order to be able to claim that level of refund.

The Tax Cuts and Jobs Act, which took effect in 2018, eliminated what had been a 20-year limit on the ability to carry losses forward unlimited in use each year. In other words, a taxpayer could continue carrying accrued losses forward indefinitely. However, losses created after tax reforms went into effect on January 1, 2018 were limited to 80 percent of taxable income in any given tax year. So losses could be used to reduce taxes owed but not completely as was the general rule prior to enactment of the law. The CARES Act passed earlier this year suspended the 80 percent limit on taxable income limit on loss vary forwards for three years and also allows taxpayers to carry back losses from 2018, 2019 and 2020 for five years.

Another tax provision that President Trump has utilized in the past to reap millions of dollars in write-offs is conservation easements. In a conservation easement, a property owner gives up the right to make certain changes to a property in order to preserve it for future generations. For example, Trump reportedly secured a $21.1 charitable tax deduction for signing a land conservancy agreement in 2015 on the Trump Organization’s 200-acre Seven Springs estate in Westchester County. He also has a conservancy agreement at his Mar-a-Lago resort in Palm Beach.

However, that is one deduction that may not fly in the future. “That has become a very big hot button with the IRS, and there are some very substantial law firms and appraisal firms that are on the hot seat about their opinions in conservation easement cases,” says Stephen Phillips, senior partner and CFO at Phillips Golden, an Austin-based law firm specializing in commercial real estate and tax law. Conservation easements have become a targeted audit issue for the IRS, and they are winning those cases, he says.

He has referenced the audit as a reason for not disclosing his tax records. The New York Times article has sparked curiosity from people who would like to see more detail on President Trump’s itemized business expenses, especially after reading about $70,000 write-offs for haircuts. One group digging into those details is the IRS. It is no secret that President Trump has been in the midst of a decade-long tax audit.

The picture the New York Times investigation paints of a man who never pays taxes because of all these big losses creates a public impression that real estate is some type of big tax shelter scam, and that is not the case, says Phillips. President Trump has a team of very capable tax attorneys and advisors who rendered opinions that the tax provisions he utilized should withstand IRS scrutiny. “The other thing to keep in mind is that we are looking at anecdotal news reports on what, as tax attorneys, we know to be very complex tax provisions, particularly at the edges,” he says. That makes any analysis of exactly what transpired somewhat of a fool’s errand, adds Phillips.

Unfortunately, another part of the picture that's impossible to discern without further documentation is assessing how much of President Trump's income and offsets have come from real estate compared to his other streams of income in recent years, which have primarily come in the form of licensing deals and fees and his stint as the host of the game show The Apprentice. President Trump is also not the first wealthy investor to have run for president, but most others had reported paying higher income tax rates. For example, Sen. Mitt Romney in 2011 released returns showing he paid an effective tax rate of 14.1 percent.

There are parts of the report that remain difficult to parse without further details. For example, the story refers to amounts for “consulting fees” that seem to correspond to amounts paid out to President Trump’s daughter Ivanka Trump, who was an employee of the Trump Organization at the time. In addition, there are generous allocations for business expenses.

According to Phillips, another concern is not the reported tax losses so much as it is President Trump’s history of not repaying large amounts of debt. “Is it possible to tax shelter your income for years on end? The answer to that is there is no way to do that if you want to earn a real economic profit, but there is a way to do that if you are fortunate enough to borrow money, utilize that money for tax deductible expenditures, and then never pay it back,” he says.

For example, the $1 billion in losses that the New York Times reported on during the last presidential election likely was due in part to Trump’s use of a tax law provision regarding S corporations that allowed him to use tax basis for debt, even though he never had to pay the debt back or recognize income from that debt when forgiven or discharged, says Phillips. That tax provision was eliminated in 2002, and now a taxpayer would have to reduce the amount of net operating losses by the amount of the forgiven debt.

For those that share that view that the debt is perhaps a bigger issue than the amount of taxes President Trump pays, his current loan obligations could be concerning. According to the Times, President Trump has $421 million in loans and other debts outstanding with most of it coming due within four years. As it pertains to tax deductions afforded to commercial real estate investors, President Trump—like any other commercial real estate—appears to be simply following current tax code, some of which his administration helped to create.

The rules are there in part because of strong real estate lobby, adds O’Rourke. In addition, tax legislation is intended to motivate a behavior. For example, mortgage interest deductions are intended to support the home ownership and stability of a nation’s population, while charitable deductions are aimed at promoting charitable giving, he says. “Tax deferred real estate investments are intended to support a business climate that desires stability in ownership of office, industrial, hotel and apartment properties so that the businesses that use those properties have a safe and reliable location for their employees to prosper,” he says.