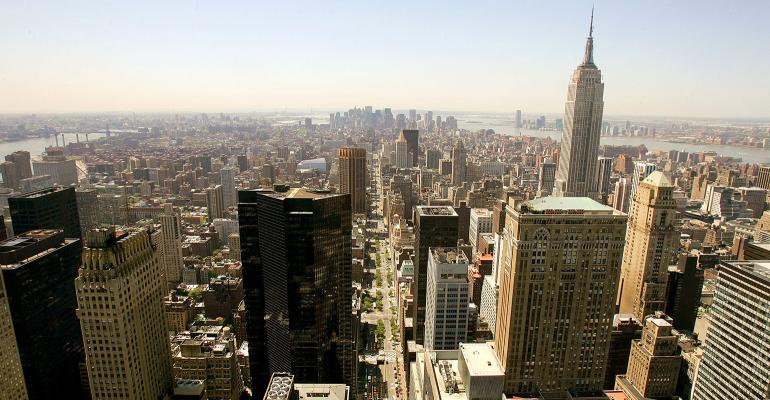 (Bloomberg) -- U.S. commercial real estate prices may fall as much as 5 percent in the next 12 months amid tightened regulations, a wall of debt maturities and property sales by publicly traded landlords, Pacific Investment Management Co. said in a report Monday.

“Storms form when moisture, unstable air and updrafts interact,” they said. A similar confluence of factors “is creating a blast of volatility for U.S. commercial real estate.”

Pimco said there may be opportunities in a real estate shakeout, allowing some buyers to snap up properties at bargain prices. Additionally, a wave of maturing debt from the last decade’s boom starts coming due this year, opening a window for investors to fund borrowers who come up short, according to the report.

“For flexible capital, this storm might be a welcome one indeed,” Murray and Clarke wrote.

Signs of a cooling real estate market have emerged across the country since the start of the year. Commercial-property values in big U.S. cities, which have seen the largest increases during the recent boom, have declined 3 percent in the past three months, Moody’s Investors Service and Real Capital Analytics Inc. said in a June 6 report. Real estate transactions in New York, the biggest U.S. property market, are forecast to decline by as much as 30 percent this year, brokerage Cushman & Wakefield said in April.

Turmoil in the market for commercial mortgage-backed securities has led to higher borrowing costs for landlords, inhibiting future price growth, Pimco said. This is especially true for properties in smaller cities that are more reliant on Wall Street banks for funding.

The tumult in CMBS is due in part to regulations such as Dodd-Frank that make it more expensive for banks to hold securities, according to the report. For example, Wall Street dealers were unable to provide liquidity when hedge funds were forced to sell CMBS holdings amid a global market rout in February, sending prices for the debt plummeting, Pimco said.

The selloff “highlighted an increasingly important headwind” to commercial real estate from the debt market and had little to do with property fundamentals, Murray and Clarke said.

Real estate investment trusts also have been hurt by volatile markets. The companies’ shares are trading at prices that undervalue their holdings, which include properties such as shopping malls, office buildings and hotels. That’s leading REITs to become net sellers, according to the Pimco report.

The future is uncertain for foreign investors, who poured cash into U.S. commercial real estate as the dollar appreciated and overseas economies wobbled, according to the report. China has hinted at increased controls on capital outflows, lower oil prices could curtail investing from the Middle East and Canada, and concerns about U.S. policies after the presidential election make continued investment from other countries “far from guaranteed,” according to the report.

Real estate and other alternative investments are a potential growth area for Pimco, which has traditionally focused on fixed-income securities. The Newport Beach, California-based firm, with $1.5 trillion in assets under management, cut 68 workers and offered buyouts to others Thursday as the firm seeks “to serve our clients in this fast-changing asset-management industry landscape,” according to an internal memo from managers obtained by Bloomberg. Pimco manages about $25 billion in alternative assets, such as real estate, debt, hedge fund and private equity strategies.