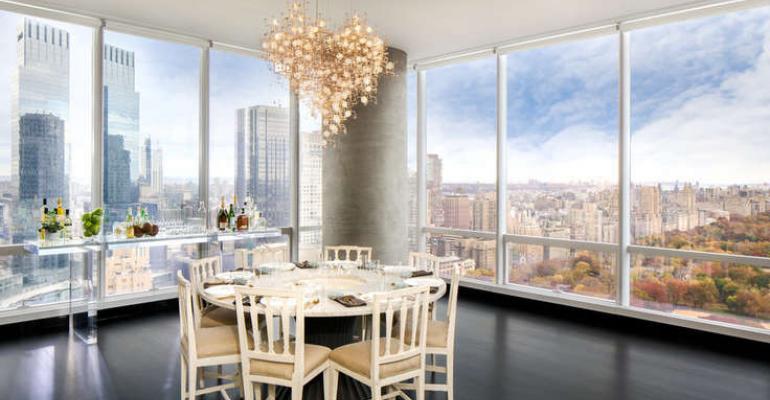 <p>The view from One57 in Manhattan.</p>
Real Estate

(Bloomberg) -- Prospective buyers at one Upper East Side condo project are quietly being offered a 5 percent discount. At an almost-completed Midtown building, five-bedroom homes will be divided into smaller units. Brokers whose clients sign deals at a downtown tower before Labor Day are getting $5,000 gift cards.

Such tactics have become more common in Manhattan, where developers are coping with a luxury-condo glut and adjusting to a new reality after years of building to meet seemingly insatiable demand. With the market now sputtering, they’re altering sales plans and making behind-the-scenes deals in an attempt to create momentum at their projects before an onslaught of even more competition.

“Right now, time is your enemy,” said Jacky Teplitzky, a luxury broker with Douglas Elliman Real Estate. “The first question that people ask is how long has an apartment been on the market?”

Global economic turmoil, slumping oil prices and the uncertainty of this year’s presidential election are weighing on luxury-home buyers’ decision-making across the U.S. In New York, where more than 3,500 new apartments are hitting the market this year, developers have to work even harder for a sale. It’s a turnabout from the boom days just a few years ago, when investors quickly plunked down record-shattering sums for homes still in the planning stages. Wealthy buyers now are taking time to browse multiple options and negotiate before committing to a purchase -- if they make one at all.

For the first 35 weeks of the year, contracts to buy Manhattan homes at $4 million or higher tumbled 21 percent from the same period in 2015, data compiled by luxury brokerage Olshan Realty Inc. show. The 758 properties in those deals spent an average of 291 days on the market, or 54 more days than a year earlier.

Developers have postponed plans to add even more apartments. The 3,574 units slated to reach the market this year are 38 percent fewer than what was estimated in January, according to brokerage Corcoran Sunshine Marketing Group. Of the units that have or will be listed in 2016, more than half are considered luxury, or priced at more than $2,400 a square foot.

“We’ve never had a buildup of housing inventory that has been so skewed to the high end,” said Jonathan Miller, president of appraiser Miller Samuel Inc. “There’s too much development being built at 2014 prices, and that buyer isn’t there. Conditions have changed quite a bit since then.”

Some builders with projects close to completion are touting their within-reach move-in dates, while for others, the answer has been to delay a marketing push until the chance of success seems greater.

At 111 W. 57th St., where a penthouse with direct Central Park views will be listed for $57 million, a formal sales effort won’t kick off for about a year, until the building reaches roughly 800 feet (244 meters) and can catch the eye of potential buyers. Still, two contracts were signed in June and a third is being negotiated, with the buyers getting “exceptionally good value,” said Kevin Maloney, principal and founder of co-developer Property Markets Group.

The sales were “not at the price point I wanted it to be,” he said. After a debate with office colleagues who argued he should hold off on making those early deals, Maloney decided their symbolic worth offset the reduced prices.

“It’s important for me personally to start logging sales,” he said.

At another of Maloney’s projects, in Soho at 10 Sullivan St., an 8,400-square-foot (780-square-meter) penthouse listed at $45 million was sliced into two smaller units. Neither has sold yet, and the pricier apartment got a $1 million cut to $28.5 million, he said.

“The next two years will be the year of the deal,” Maloney said. “If you have cash, I can’t imagine there’s not a condo project that’s coming out of the ground where you can’t walk into the sales office and say ‘This is the deal I’m willing to offer.’”

At a condo tower under construction at 252 E. 57th St., near Second Avenue, prices were whittled by more than $2 million on some of the costliest units as part of a larger sales-boosting strategy. With the project nearing completion and move-ins possible as early as November, “getting people into the building to actually see the finished product is critical,” said Steven Rutter, director of Stribling Marketing Associates, the brokerage handling sales at the property.

The least-expensive unit at the building, whose hallmark is a curvy glass skin, had its price cut by $735,000 to $3.95 million, according to offering plans filed with the state attorney general’s office. About 30 people inquired about the listing, and its sale spurred nine other deals among those who showed interest, Rutter said.

Customer traffic has increased 50 percent since January, when strategies such as the price cuts and sweetened broker commissions were implemented, said Julia Hodgson, director of development for World Wide Group, which is building the project with Rose Associates. She declined to disclose the number of sales at the 93-unit property.

The next move will be to break up two of the larger five-bedroom homes into two- and three-bedroom units.

“In this market, you really need to be proactive,” Rutter said. “It’s not a good idea to sit and wait for the market to come to you.”

Extell Development Co., whose One57 skyscraper set a record with a $100.5 million penthouse sale in 2014, is finding buyers are more scarce now, even for its lower-priced projects. At the Kent, under construction on 95th Street near Third Avenue, 5 percent discounts are being offered as a way “to incentivize people to pull the trigger,” Extell President Gary Barnett said. Prices for the market-rate units start at $2.46 million for a 1,293-square-foot, two-bedroom condo, according to attorney general filings.

Barnett’s making the same discount available to buyers at One Manhattan Square, an 815-unit downtown project where the asking prices on most condos had already been reduced this year. A one-bedroom apartment with outdoor space on the lowest available floor is listed for $1.65 million, down from an initial $2.05 million, filings show.

“There’s no negotiation,” Barnett said of the additional 5 percent offer. “That’s what we’re giving -- not less, not more.”

Other incentives amount to a discount while not cutting the apartment price. Some builders are paying the buyer’s transfer taxes and throwing in extras such as storage units, said Martin Jajan, a Manhattan attorney who represents high-net-worth overseas investors.

Jajan said his clients have grown more wary, sensing that the market’s four-year run-up in prices can’t continue indefinitely. One client has opted to buy several smaller homes in a mix of neighborhoods rather than a single trophy property, while another chose to rent apartments at both One57 and nearby 432 Park Ave. before committing to a purchase, he said.

Developers also are increasingly courting real estate agents, hosting parties at penthouses and offering gifts as a way of getting customers through the door.

At a June event showcasing 50 United Nations Plaza’s duplex penthouse -- on the market for $70 million since 2013 -- Zeckendorf Development LLC raffled off a weekend at the Miami Beach Edition hotel to brokers who attended. In July, the builder gave a party on a concrete slab at its under-construction tower at 520 Park Ave., inviting brokers in hard hats to sample the view from the 29th floor of the skeletal building, where prices start at $16.2 million. A Zeckendorf representative didn’t comment.

“Every single day in my inbox, I get private invitations,” Teplitzky of Douglas Elliman said. “If I wanted to get breakfast, lunch and dinner and not spend a dime at a restaurant, I could say yes to all the presentations, all the cocktail parties, you name it.”

Developers of 101 Wall -- a conversion of a lower Manhattan office building into 52 apartments starting at $1.18 million for a one-bedroom -- have been giving brokers $5,000 American Express gift cards when clients sign a contract, according to e-mails sent by Corcoran Sunshine, the firm marketing the project.

The incentive, initially offered on deals made before Memorial Day, has been extended at least twice and now ends on Labor Day. The developer, Claremont Group, didn’t return calls seeking comment on the promotion. A Corcoran Sunshine representative said it’s been successful.

“Things will sell, they’ll just sell at lower prices,” she said. “You can’t sit out there forever trying to sell one apartment a month.”