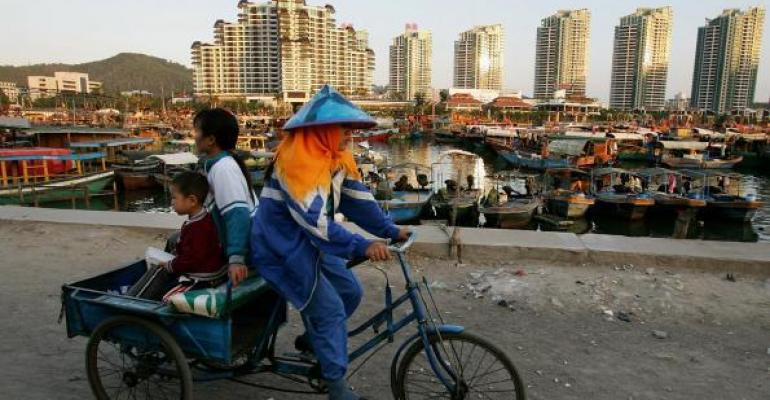 (Bloomberg) -- Earlier this year, Mr. and Mrs. Cai, a couple from Shanghai, decided to end their marriage. The rationale wasn’t irreconcilable differences; rather, it was a property market bubble. The pair, who operate a clothing shop, wanted to buy an apartment for 3.6 million yuan ($532,583), adding to three places they already own. But the local government had begun, among other bubble-fighting measures, to limit purchases by existing property holders. So in February, the couple divorced.

“Why would we worry about divorce? We’ve been married for so long,” said Cai, the husband, who requested that the couple’s full names not be used to avoid potential legal trouble. “If we don’t buy this apartment, we’ll miss the chance to get rich.”

China’s rising property prices this year have been inspiring such desperate measures, as frenzied buyers are seeking to act before further regulatory curbs are imposed. While the latest figures out Friday show easing in some of the hottest cities such as Beijing and Shanghai, the cost of new homes surged by the most in seven years in September.

On the whole, the real estate market “apparently cooled” in October following targeted measures rolled out in first-tier and some second-tier cities, China’s National Bureau of Statistics said in a statement. Local governments in at least 21 cities have been introducing property curbs, such as requiring larger down-payments and limiting purchases of multiple dwellings in a bid to cool prices.

The impact of the curbs may be short-lived as regulators have shown no signs of tightening on the monetary front, according to analysts from UBS Group AG and Bank of Communications Co.

“The curbs will show their effect in the initial two-to-three months, but in the longer term idle capital will still likely flow to property in the largest hubs as ‘safe-heaven’ assets,” said Xia Dan, a Shanghai-based analyst at Bank of Communications. The impact of the curbs will gradually abate as “liquidity is so abundant in a credit binge,” she said.

In the first three quarters of 2016, according to data compiled by Bloomberg, average prices for new homes rose 30 percent in tier-one cities such as Shanghai, and 13 percent in smaller, tier-two cities.

The boom traces to 2014, when the People’s Bank of China began easing lending requirements and cutting interest rates. The China Securities Regulatory Commission also lifted restrictions on bond and stock sales by developers, helping them raise money for new projects.

Soon, properties were selling for ever-larger sums in government land auctions. By June 2016, China’s 196 listed developers had incurred 3 trillion yuan in debt, up from 1.3 trillion three years before. In many cities, the price per square meter for undeveloped land has risen higher than for existing apartments on a comparable plot next door, a situation the Chinese describe as “flour more expensive than bread.”

Officials have been trying to end the exuberance without harming the economy, a task made more difficult by the property fever’s uneven spread. Many smaller municipalities rely on property sales to plug holes in their budgets, giving them an incentive to increase the supply of developable land. So while premier cities have seen tight supply and high prices, smaller ones have too many apartments and not enough buyers.

The central government is also promising to crack down on rogue players: In early October, the Ministry of Housing and Urban-Rural Development said it was investigating 45 developers and agents for allegedly engaging in false advertising and other unlawful activities promoting speculation.

There’s some risk that such measures will succeed too well. In a Sept. 28 report by Deutsche Bank AG, economists Zhiwei Zhang and Li Zeng estimated that a 10 percent decline in housing prices nationwide would lead to 243 billion yuan in losses for developers. Consumer spending could fall, too, since people have taken on more debt to buy property. Mortgages accounted for 23 percent of new loans in 2014, compared with 35 percent in the first half of 2016 and 71 percent in July and August.

“The potential macro risk is alarming,” Zhang and Zeng wrote.

That’s not to say China is headed for a meltdown. Banks haven’t resorted to the subprime lending that proliferated in the U.S. before the Great Recession, and despite the recent rise in mortgage loans, China isn’t taking on vast levels of household debt -- only 45 percent of gross domestic product, according to HSBC Holdings Plc, compared with 66 percent in Japan and 89 percent in South Korea. And despite the relaxation in 2014 of rules preventing sales of mortgage-backed securities, which also exacerbated the U.S. crisis, Chinese investors hold only 72.8 billion yuan worth, according to data from Chinabond and the Shanghai Clearing House.

In 2017, the Communist Party will hold its quinquennial congress, and with GDP growing 6.7 percent so far this year, its slowest pace since 1990, a property bust would be especially unwelcome.

“The only thing I know is that buying property won’t turn out to be a loss,” said Cai, citing two decades of rising prices as proof. “From several thousand yuan a square meter to more than 100,000 yuan. Did it ever fall? Nope.”