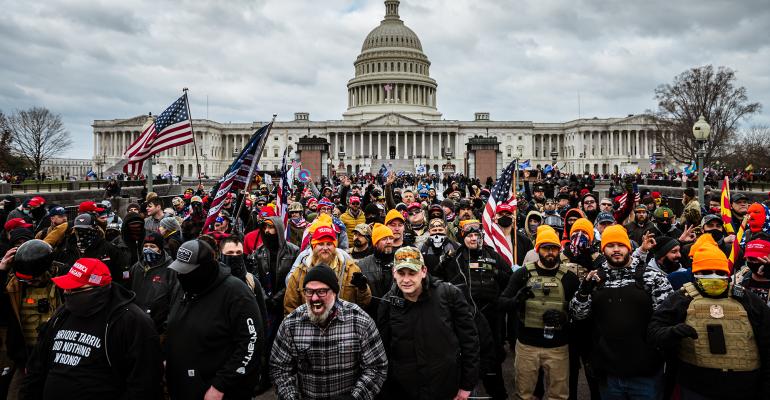 This story will be updated with additional industry comments as we receive them.

Four people died amid the mob's attacks on the building. One woman died after being fatally shot, while three others died after separate medical emergencies, according to D.C. Metropolitan Police.

Mortgage Banker Assocation President and CEO Bob Broeksmit, CMB, issued the following statement in the immediate wake of the violence yesterday, before Congress reconvened later in the day to finish its certification process:

“MBA condemns the vicious, lawless mob that descended on the U.S. Capitol today and wreaked havoc on our democratic process. Their actions were abhorrent and not representative of the ideals and character of America. The United States’ democracy is the model for the world; those who deliberately undermine or disrespect it, or who fail to protect it, should be ashamed. ...

“We are calling for an immediate peaceful end to today’s assault on our democracy. The world is watching, and nothing can deter us from completing this peaceful transfer of power.

“MBA looks forward to working with the Biden-Harris administration and new Congress in the weeks and months ahead.”

“This afternoon’s abhorrent assault on the United States Capitol and on the underpinning institutions of our democracy must come to an end. NMHC calls on lawmakers to live up to their oaths and certify the results of the 2020 election as soon as they can safely do so.

“In 1863 at Gettysburg, President Lincoln consecrated that ground with the words ‘and that government of the people, by the people, for the people, shall not perish from the earth.’ Members of Congress now have an urgent responsibility to fulfill that creed, protect our system of government and complete the certification of Electoral College ballots.

“NMHC and its members look forward to working with the Biden-Harris Administration and Congress to address our nation’s housing affordability challenges and provide much-needed support for our nation’s renters and housing providers.”

“The chaos unfolding in the nation’s capital is the result of unlawful efforts to overturn the legitimate results of a democratic election. The country deserves better. Business Roundtable calls on the President and all relevant officials to put an end to the chaos and to facilitate the peaceful transition of power.

The group then issued a second statement this morning:

“Yesterday’s inexcusable violence and chaos at the Capitol makes clear that elected officials’ perpetuation of the fiction of a fraudulent 2020 presidential election is not only reprehensible, but also a danger to our democracy, our society and our economy.

“As businesses who operate in and employ millions of people in all 50 states, we represent Americans of all political backgrounds who cast their votes on Election Day. While our ballots may have been divided, our support for the democratic process and the peaceful transition of power must be unequivocal.

“After the unconscionable and tragic events we witnessed, it could not be clearer that it is time for the nation and lawmakers to unite around President-elect Biden and Vice President-elect Harris. It is only together that we can move forward to successfully confront our nation’s many challenges, chief among them ending the pandemic and ensuring a safe and rapid economic recovery.”

ICSC put out a comment this morning as well:

“As our country faces unprecedented challenges, we’re pleased that Congress successfully certified President-Elect Biden’s election after a day of turmoil. Our nation desperately needs stability, unity, and commitment to our core democratic values, and the certification of President-Elect Biden’s victory is an important step in that process.

Make no mistake: Yesterday’s events at the Capitol were a stain on this country’s proud history of the peaceful transition of power. We urge our elected officials to work together to solve the great challenges of our time and display the leadership and unity we need, not further stoke tension and division. Now is the time to rebuild our economy, bring aid to families and businesses in need, and effectively manage the COVID-19 pandemic. We look forward to working with President-Elect Biden and all of our democratically elected officials to do so.”

“This is a sad and distressing day for our country. For more than two centuries we have prided ourselves as Americans on our democratic principles, our nation of laws and the unique experience of peaceful transfers of power from one administration to the next, regardless of party affiliation.

“Our retailers, the millions of associates they employ and the communities they serve across the country want and need our elected officials to focus on the priorities that ensure faith in our government through stability. Today’s riots are repugnant and fly in the face of the most basic tenets of our constitution, and the Administration must move quickly to provide the leadership that will end this affront to our democracy.”

The National Association of Realtors issued the following statement on Wednesday:

"The scenes we are watching unfold as a nation are shocking and leave us in disbelief," Oppler said. "America's largest trade association stands with our democracy and our nation's centuries-old observance of peaceful protests and the peaceful transfer of power. What happened today at the U.S. Capitol was an assault on both.

"We urge for calm and fully support the U.S. Capitol Police and the National Guard to restore safety to the city of Washington, D.C," Oppler continued. "Members of Congress, their staff, Capitol Police Officers and workers at the U.S. Capitol today came under attack. These are scenes that should not stand in the United States of America and are no part of our fabric as a free, compassionate and tolerant people."

The Commercial Real Estate Finance Council added their voice to the chorus on Thursday morning.

CREFC’s Executive Director, Lisa Pendergast stated, “Like much of the nation, I was horrified and saddened by the events that unfolded yesterday at the Capitol Building. We fully support the election of Joe Biden as the 46th President of the United States and we look forward to supporting his administration in the rebuilding and healing of our damaged nation.”

Adam Behlman, CREFC Chair stated, “After the events that occurred yesterday, I was compelled to stay up all night just to see true democracy in action, which thankfully occurred. Our nation’s road to recovery will be long and arduous and as we are a diverse organization that represents the varied interests of many constituents, we are dedicated to working as one nation alongside the entirety of our elected leaders to ensure that democracy is honored and upheld.”

The National Association of Manufacturers went a step further than other business groups and called on Vice President Mike Pence to consider invoking the 25th Amendment to remove President Trump from office before the January 20 inauguration of President Biden.

“Armed violent protestors who support the baseless claim by outgoing president Trump that he somehow won an election that he overwhelmingly lost have stormed the U.S. Capitol today, attacking police officers and first responders, because Trump refused to accept defeat in a free and fair election. Throughout this whole disgusting episode, Trump has been cheered on by members of his own party, adding fuel to the distrust that has enflamed violent anger. This is not law and order. This is chaos. It is mob rule. It is dangerous. This is sedition and should be treated as such. The outgoing president incited violence in an attempt to retain power, and any elected leader defending him is violating their oath to the Constitution and rejecting democracy in favor of anarchy. Anyone indulging conspiracy theories to raise campaign dollars is complicit. Vice President Pence, who was evacuated from the Capitol, should seriously consider working with the Cabinet to invoke the 25th Amendment to preserve democracy.

“This is not the vision of America that manufacturers believe in and work so hard to defend. Across America today, millions of manufacturing workers are helping our nation fight the deadly pandemic that has already taken hundreds of thousands of lives. We are trying to rebuild an economy and save and rebuild lives. But none of that will matter if our leaders refuse to fend off this attack on America and our democracy—because our very system of government, which underpins our very way of life, will crumble.”