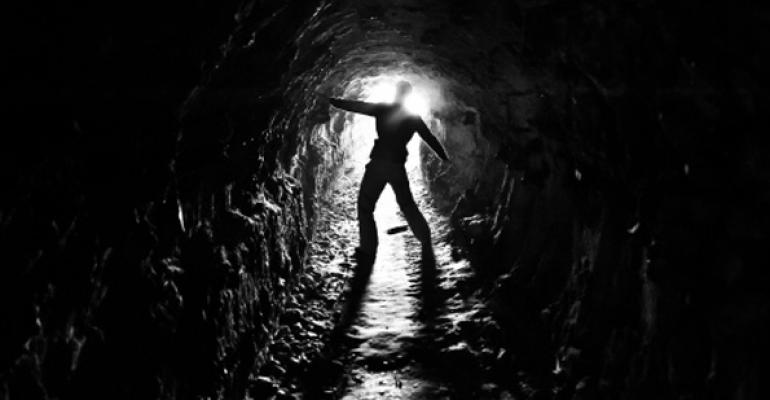 A bull market helps many advisors feel pretty good about the firms they work for. Still, according to the 2013 Broker Report Card, some are happier than others.

A rising market lifts many spirits, including advisor satisfaction with the firm that employs them.

REP.’s 23rd annual Broker Report Card, our annual survey that lets advisors from the six major national brokerages rate their employers on a number of factors, shows that advisors were, overall, feeling better about where they work. The average approval rating of 8.1, on a scale of one (lowest) to 10 (highest), almost reaches pre-crisis levels. (See chart.) While most firms in the survey continue a trend of low marks on compliance and technology integration issues, this year marks a turnaround in how advisors feel about their firm’s public perception and internal morale. 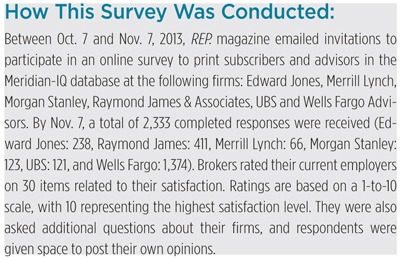 For the second year in a row, Edward Jones received the highest overall score from its advisors, followed closely by Raymond James. UBS and Wells Fargo tied in ranking the highest among the traditional wirehouses, while Morgan Stanley posted the lowest score, as it has for the past four years, though it too showed marked improvement from previous years.

The long-running bull market fuels advisor satisfaction, of course, but observers say it’s a fragile confidence. “Some advisors are talking themselves into being content,” says Matt Lynch, principal at Tiburon Strategic Advisors. “But while the market is doing well, the broader economy isn’t. There are psychological issues over what we’ve lived through.”

Advisor satisfaction is likely more fickle in the wake of the recovery. “The crisis disillusioned many advisors and further pushed them away from their firms,”, says Philip Palaveev, owner and CEO of The Ensemble Practice LLC. “The days when a firm defined an advisor, when an advisor spent her entire career with one firm, are drifting away.”

At least in spirit if not in fact, however. For instance, 20 percent of advisors said they considered going independent in the previous year (five percentage points higher at Wells Fargo, Merrill Lynch and Morgan Stanley), yet 93 percent say it is highly or somewhat likely they will remain where they are for at least the next two years. The thinking about independence when markets are good is more “a statement of curiosity and fantasy,” according to Palaveev. For now, life at the national brokerages is good.

For some, Edward Jones’ top ranking is a testament to the firm’s advisor-centric approach. “It’s a wonderful firm with a culture that appeals to advisors; that’s what you’re seeing,” says Mindy Diamond, president of Diamond Consultants.

Raymond James, which again came in second place this year, also puts advisors at the heart of its operation, yet its overall score slipped a bit—dropping from a 9.1 in 2012 to 8.8 this year.

That may be related to the firm’s increased focus on compliance, says Jonathan Henschen, president of the recruiting firm Henschen & Associates. The firm has been putting more scrutiny on advisors when it comes to areas like marketing, he says, but adds that firms across the board are accelerating compliance to stay out of the headlines.

Even with the dip, Raymond James may be the firm in the best position to appeal to advisors when the headwinds arrive. “The firm has a depth of resources that is much greater than Edward Jones,” Diamond says. 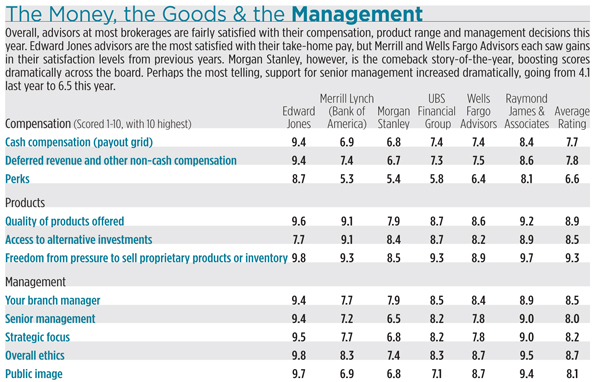 Morgan Stanley advisors again ranked their firm the lowest, yet its overall score dramatically jumped from last year’s 4.5 to 6.6 this year, which Tiburon’s Lynch calls “a vote of confidence.”

But Morgan Stanley’s advisors gave their firm lower marks than any of the other firms on almost all aspects of support and resources, particularly on the quality of its technology and advisor workstations, and its marketing support.

Still, Morgan Stanley has grown its advisor force by 250 since June and by 139 advisors over the past year. And advisors who are already at the firm seem to be sticking around. Only 13 percent of Morgan Stanley advisors say they are thinking about leaving in the next two years.

Part of the contradiction is the fact that on Wall Street, Morgan Stanley’s advisors are getting longer in the tooth. The firm has the oldest population, and its advisors are the longest tenured. According to the survey, the firm’s advisors were first licensed, on average, in 1988, 10 years before advisors at most of the other firms. They’ve been with the firm for 17 years, compared to an average 10 years at
other houses.

“As these advisors get closer to retirement age, they’re vested in retirement places, they’re senior people in the firm with all the perks that go along with that—respect, knowledge, corner office—it’s that much harder to leave,” Lynch says.

While Morgan Stanley may be moving forward, Wells Fargo Advisors is entering a crossroads period. The St. Louis firm, which tied UBS for third place overall this year, has kept a purposeful distance from both Wall Street and the negative headlines that have plagued some other firms. Wells Fargo’s public image and overall ethics are the highest of the traditional wirehouses. As one advisor put it, “I believe our image is good with the general public and the tools and support we have to deliver quality services to clients are the best I have seen in the industry.”

But Wells Fargo is facing a game-changing year in 2014, says Todd Taylor, partner at Heidrick & Struggles, a global executive search and consulting firm. There is a leadership change as Danny Ludeman hands the reigns over to Mary Mack, making some advisors fear a culture shift. “The big question is ‘who are we?’” Taylor says. There’s a lot of concern that Wells Fargo’s bank channel will eventually swallow its wealth management business entirely. Already, almost four out of 10 (37.8 percent) of Wells Fargo advisors say they are pressured to sell banking products, higher than any other brokerage. (The overall average is 26.5 percent.) Of course, of those who say they are pressured, only 14.6 percent claim it hurts their credibility, while 33 percent say access to the products helps their business.

“Danny did a really good job of integrating the best of both [the bank and the brokerage],” Taylor says. But it’s not clear how Mack will handle cross-selling strategies and brokerage support. 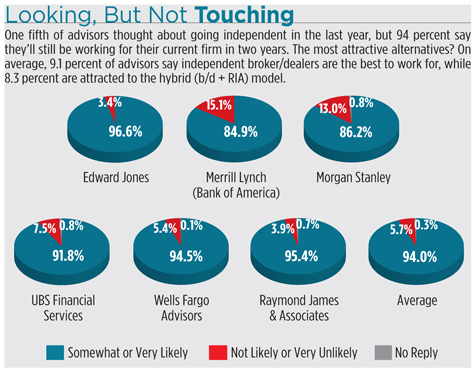 Life as We Know It

So what happens when the markets turn bearish? Advisors looking to move are likely heading to an independent broker/dealer or a hybrid firm, according to the survey. “This is not good news for the industry leaders,” says Brad Hintz, an analyst at Sanford C. Bernstein & Co. “Unhappy FAs, with expiring retention packages, certainly imply another round of turnover on the horizon.”

In the meantime, the national brokerages, aware of the continued interest in independence, have a chance to adjust to broader shifts in how retail clients interact with their advisors and what they expect out of the firms with which they do business. “They’re responding with new products and services, which they’re probably getting credit for,” Lynch says. Like the advice they give to clients, it’s easy to be comfortable when the markets are up, but it pays to prepare for when they aren’t.c