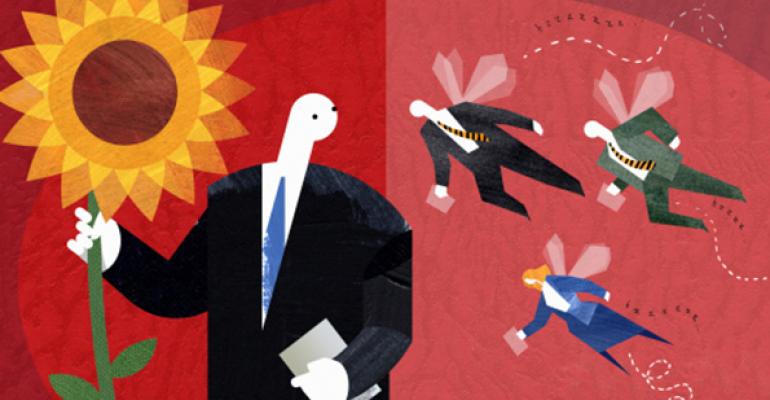 How Long Should You Take to Land a Prospect?

As long as it takes, if the client is worth it. But expect the crucial part of the process will always be the final meeting

Not long ago, a new advisor was trying to land a wealthy couple. He’d met them previously, they were interested, and he thought the next meeting would seal the deal. So instead of starting off the meeting by ensuring that the husband and wife didn’t have any outstanding questions, he jumped right into the investment plan he’d created. He was so intent, he didn’t notice their increasing lack of interest.

The couple had more than half their investable assets in a single stock—an issue they had brought up before, but one the advisor did not broach again; worse, his plan failed to account for it. They went elsewhere. “Really competitive advisors would have given the couple an opportunity to raise the issue and show their willingness to do something about it,” says Courtland Williams, complex manager and first vice president, investments at Raymond James & Associates in Greenville, S.C., who has counseled the newbie. “He didn’t handle it the right way.”

Most advisors have a process for bringing in potential new accounts—a certain number of meetings, a series of topics to cover—but many find the trickiest part of the chain is the final close. “It’s the most critical meeting, in my opinion,” says Williams. It’s the time you make sure your prospects are completely comfortable with you and that you stay on full-scale alert for any lurking questions or objections you haven’t addressed sufficiently.

Advisors can’t be lax about any part of the process. “This is a relationship business and you have to treat it like dating,” says Bob Stone, a partner with Telemus Capital, a Southfield, Mich, firm with about $2 billion in assets. “You’re selling yourself.” It can take Stone up to five meetings or more to get a prospect to sign on, but in all cases he focuses on the same process. In the first meeting, he lets the prospects do the talking; in the second, he presents an investment management proposal based on a questionnaire they’ve filled out. If appropriate, he then asks whether they’re ready to sign the paperwork, but there could be more meetings until that point is reached. The important part, he says, is to make sure he’s picking up on any possible objections throughout the process and showing himself to be trustworthy. “I really know from the first meeting if they’re going to want me,” he says. It’s easier, of course, when the prospects are from referrals who’ve already talked you up before even setting eyes on you.

But you still have to pay special attention to the final close. It’s essential to ask right at the beginning if there are any questions or concerns. Otherwise, if there is a problem lurking in the background they’re likely to not be engaged during the rest of the discussion—and to become less involved as the discussion winds down, as Williams’ advisee learned. “The prospects will spend the whole time nodding their head up and down, but they really aren’t hearing you,” says Williams.

Damon Nickle is an advisor with Biddle Capital Management in Wilmington, Del. He recently held his third meeting with a husband and wife; in his experience, this is the meeting where the relationship becomes official. But the husband seemed reluctant. Nickle stopped the conversation, said he sensed the man had some concerns, and asked him to explain what they were.

That did the trick. The prospect admitted he wasn’t clear why he couldn’t just do the investing himself and save on the fees, a point he had alluded to in previous meetings but hadn’t come right out and asked. That gave Nickle the perfect opportunity to zero in on both an unstated objection and why he was worth the money. The prospect was convinced and agreed to sign on. “He said he didn’t really want to do this himself, anyway,” says Nickel, whose firm has more than $90 million in assets. “I just needed a way to get him to open up to me.”

Similarly, Tony D’Amico, CEO and founder of the Fidato Group, which has about $65 million in assets, recently met with a prospect a third time, expecting it to be the final close. But the woman still seemed hesitant. When he told her that he sensed she had questions, the prospect admitted she found dealing with change to be difficult. D’Amico then asked whether she preferred the pain of staying the course or making a change that would help her financial security. She decided to become a client.

It may take longer to get to the close with higher-net-worth prospects. Advisors working with the very wealthy recommend reaching out to a prospect’s other trusted professional advisors, such as estate planning lawyers and accountants, to get them involved—and receive their blessing. Adam Newell, director of private client consulting and a principal of DiMeo Schneider & Associates in Chicago, was meeting for the third time with a $50 million family that had just sold a business. He suggested they have dinner with the prospects’ attorney. It gave the lawyer the chance to ask questions the family hadn’t thought of and for Newell to demonstrate his savvy. The prospects agreed to hire Newell.

No matter what the prospect’s net worth, always be low-pressure. That may seem painfully obvious to everyone, but the goal is to create the impression that you will be fine, both in business and in emotional health, regardless of their decision. “You don’t come out and say it, but you have to communicate that you don’t need their business,” says Richard Babjak, president of World Equity Group, a Arlington Heights, Ill., broker/dealer and RIA, who also has his own book of about $400 million in assets.

As you might expect, that is a lot harder for less-established advisors. “It’s fake it till you make it,” says Babjak. Williams suggests newbies practice and polish their spiel. Other recommendations: Shadow more-experienced advisors to see how they do it, or have a veteran attend a meeting with you and critique your performance afterwards. Advisors can go through a similar exercise to learn how to convey a feeling of real excitement about what they plan to do, so prospects feel energized too. “All selling is a transfer of emotion,” says Williams.

Even if you don’t close the deal, stay in touch. Newell, for example, had a prospect whom he courted for six months but never signed on the dotted line. About two and a half years later, because the individual still received Newell’s email newsletter and invitations, he learned about a client event featuring a member of the Federal Reserve. That piqued his interest and he attended. Afterwards, during a chat, he revealed to Newell that he was getting divorced and wanted a new advisor. “That was his catalyst,” says Newell. “Through a life-changing event, the time was ripe.”