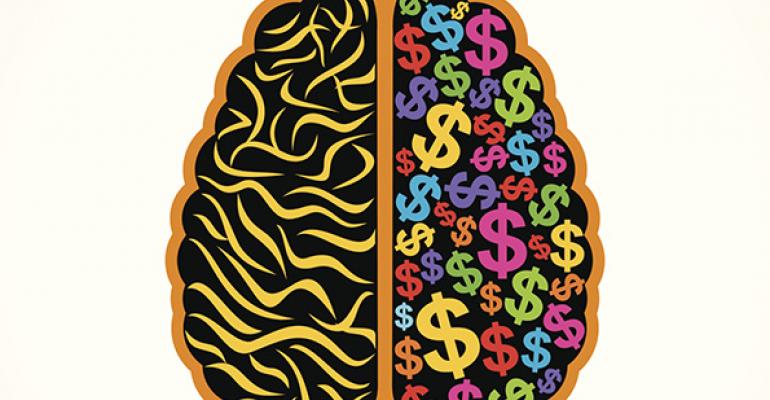 How to Capitalize on Our Instinctive Cognitive Selection Process

Recall the last time that you made a presentation to a qualified prospect—you know you’d connected, your proposal was clear and your services needed, but for some inexplicable reason they went with a competitor. Ouch!

Everyone has endured this type of painful experience, and they take time to fully flush from our minds. To increase the odds in your favor, we’ve found it helpful to develop a working knowledge of the human decision-making process—referred to by psychologists as “cognitive selection.”

How does the human mind go about making decisions? As much as most of us like to think that we’re fairly smart and make rational decisions, the reality is that human instinct plays more of a role than we like to admit. We make many decisions based on our emotions and then justify them with logic.

Elite financial advisors understand the factors that impact decision making. This knowledge is one of the reasons they’re some of the best salespeople on the planet. There are four components that impact this instinctive selection process:

1. Negativity bias. There’s a reason mass shootings, natural disasters, terrorism, robberies, homicides and even winter storms receive 24/7 news coverage—people are instinctively drawn to negative news. The reality is the fear of loss is a more powerful motivator than value of potential gain.

Financial Advisor Takeaway. Ask questions that make people feel uncomfortable, such as, Have you had an independent review of your portfolio?  Have you had your insurance policies reviewed? Has anyone reviewed the cost structure of your investments?

2. Confirmation bias (cognitive bias). This is all about wishful thinking. When someone would like something to be true, unless acted upon by an outside force, they believe it to be true—without evidence. The reality is that we don’t perceive circumstances objectively. We tend to assume, hear what we want to hear and, as a result, become locked in to our assumptions.

This bias is why an affluent prospect might assume they’re protected amidst all this volatility, their financial plan is still relevant or they have the proper insurance coverage, none of which may actually be true. Your job is to be that outside force, which entails becoming skilled at the art of disconfirmation—providing evidence to disprove assumptions.

Financial Advisor Takeaway. Using stories that play to our instinctive negativity bias, when used properly, will act as that outside force. Stories are a subtle but highly effective way to disconfirm assumptions. They can take many forms; hidden costs uncovered when reviewing a prospects portfolio, inadequate coverage for the flooding of a newly renovated second home, a 60 percent loss in wealth by being over concentrated and so on. The objective is to disrupt a prospect’s confirmation bias—and stories are more powerful than pure data points.

3. Social consensus (herd mentality). People talk, and most everyone within that sphere-of-influence wants to be part of the crowd. Our current political environment has exacerbated this quality; talking politics only with people of similar views. This is why testimonials are so powerful and name dropping has such an impact on decision making. It’s no coincidence that our research has identified word-of-mouth-influence as the umbrella under which affluent marketing resides. People talk, people listen and affluent people, in particular, don’t want to be left out. This is why elite financial advisors seem to be able to attract new affluent clients effortlessly. As a financial advisor, your reputation is your social currency within affluent spheres-of-influence.

Financial Advisor Takeaway. Since word-of-mouth-influence is the key, your mission is to excel in each of the four components of the Word-of-Mouth-Influence Hierarchy (exceeding professional expectations, emotionally connecting, activating conversations and scripting the narrative).

4. Spaced repetition (pattern recognition). It’s been said that repetition is the motherhood of learning, but it’s also the motherhood of impacting belief systems.  When something is repeated enough, there’s a tendency to believe it to be true.  Whether it’s the earth’s flat, Big Foot, fake news, or “Nobody understands today’s financial landscape better than _______.” Few things are as powerful as an affluent client or referral alliance repeatedly singing your praises.

Financial Advisor Takeaway.  You want to make it easy for your affluent clients to talk about you. So be part of their world; be present, get social, send surprise and delight gifts that stimulate conversation. But you also want to help script the narrative—provide them with one or two simple soundbites that can be repeated; “______ knows more about medical practices than anyone I know.” “We don’t make a financial decision without getting input from ______.”

Let these factors help you to develop a working knowledge of the instinctive nature of decision-making. The more you pay attention to these impact factors, the less likely you are to lose a qualified prospect, as you’ll be able to skillfully guide them into making the right decision—hiring you as their financial advisor.