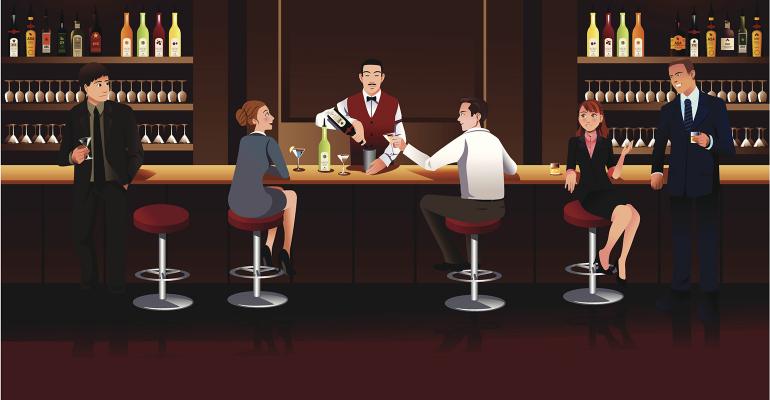 The importance of socializing with "strategic intent."

TAMPA — “Forget about the Relationship Management-Relationship Marketing Nexus,” chuckled Bart, “You’ve got the perfect title for your next book – 4 Drinks - $40 Million.” Ha!  I’m not sure there’s enough to the story to warrant a book, but an article – maybe.  So, here it goes…

I had opened my presentation to a room full of Bart’s colleagues - wealth managers and private bankers, with a story recently relayed to me by one of our coaches. The background to the story is fairly straightforward; our firm had been hired to coach a successful $2 billion AUM wealth management team, using the team leader’s phrase, “to get us back into an acquisition mode.” This wealth management team had been working with one of our coaches for nine months prior to the “4 drinks - $40 million” story.

What made this even more interesting for me was that, although various team members were on every coaching call, the team leader was often absent – to the extent that their coach was questioning their level of commitment.  But all of that changed a couple of weeks ago, as the scenario was explained to me…

Team Leader: “Mike, I just want to say two words to you.  Thank You.”

Team Leader:  “You might not have thought I was listening, I know I’ve missed a number of the coaching calls, but we’re on it, and I’ve been busy.  For instance, months ago, because of your prodding, I drove two hours into downtown Chicago just to have a couple of drinks with a client – and I cursed you out the entire drive.”

Team Leader: “It gets better.  Not only did we have a couple of drinks, my client introduced me to a close friend who happened to be there, a goldmine of a CPA, and we hit it off big time over another couple of drinks.  Fade-in, fade-out, now seven months later, we’ve got the CPA’s account and four new clients – all in all, a little of over $40 million in new assets.  We’ve already blown past our goal of $60 million that we set for working with you.  We’re likely to bring in closer to $100 million this year.”

Team Leader:  “You’ve moved our cheese.  I had no idea how powerful socializing could be – when done with strategic intent.  Which, by the way, is now our mantra – we’re always asking each other ‘What’s the strategic intent?’”

Obviously there was a little more to it than simply four drinks yielding $40 million of new assets.  But the point was well-taken.  This very accomplished team had never really activated what we refer to as the relationship management-relationship marketing nexus.   They were all business.  Yes, the three senior partners traveled in very affluent circles, sat on boards, were members of the prestigious clubs in their Chicago suburb, but never understood the social nuances of affluent sales.

According to Mike, the three partners, especially the team leader, were extremely negative towards the idea of developing referral alliances with CPAs and attorneys.  Apparently, many of these professionals traveled in the same circles (belonged to the same clubs, were on the same boards) and the partners were annoyed that they’d rarely, if ever, received referrals from any of them.

It was to the point, when Mike asked if any of the partners targeted specific CPAs and socialized with them, the response was “They know what we do.  It’s like they’re jealous because we out-earn them.”

That toxic mindset has completely changed -- after those initial four drinks.  Granted, there was a bit of luck involved.  It was merely a coincidence that this wealthy client’s good friend was also at the club where they were having drinks.  However, I don’t believe in luck.  The stars were aligned for this team leader.  He put himself in the perfect position to be introduced, with no strings attached.  The rest is history.