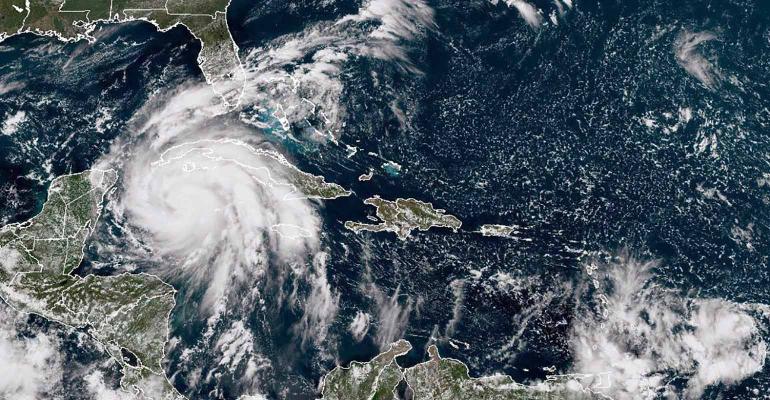 Damages and economic loss in the area could reach $60 billion to $70 billion if the current forecast comes to pass, said Chuck Watson, a disaster modeler with Enki Research. That would rank Ian as the sixth-costliest US hurricane, according to data from the National Oceanic and Atmospheric Administration.

(Bloomberg)—Hurricane Ian is poised to become one of the costliest storms in US history, leaving a destructive trail of floods and power failures in Cuba and threatening to slam Florida’s western coastline next with 125-mile-per-hour winds.

Ian’s top winds have dropped to 115 mph as it reemerged over the southeastern Gulf of Mexico, about 305 miles (491 kilometers) from Sarasota, Florida, according to an advisory from the US National Hurricane Center at 11 a.m. New York time. The storm is forecast to strengthen through Wednesday, bringing threats of 8-foot storm surges into Tampa Bay and heavy rains across Florida and the US Southeast.

Damages and economic loss in the area could reach to $60 billion to $70 billion if the current forecast comes to pass, said Chuck Watson, a disaster modeler with Enki Research. That would rank Ian as the sixth-costliest US hurricane, according to data from the National Oceanic and Atmospheric Administration.

The storm comes as climate change fuels extreme weather worldwide, including hurricanes that rapidly gain strength as they approach land. The year has already brought deadly flooding in Kentucky, a European heat wave that killed more than 2,000 people in Portugal and Spain, and more relentless drought gripping the Western US and a major hurricane that left catastrophic damage from Puerto Rico to Atlantic Canada -- each disaster exacting its own human and financial toll.

Ian’s winds are forecast to peak at 130 miles per hour in the next 12 to 24 hours, making it a Category 4 storm on the five-step, Saffir-Simpson scale, the hurricane center said. With its track veering toward Florida’s west coast, Ian will have less time to weaken and it will likely be a Category 3 -- a major hurricane -- when it hits the Sunshine State, according to Adam Douty, a meteorologist with AccuWeather Inc.

Florida Governor Ron DeSantis said in a Tuesday morning briefing that Ian is projected to strike south of Tampa Bay, with officials identifying Venice for the landfall around 8 p.m. Wednesday with winds of 125 mph.

“The impacts are going to be far, far broader than just where the eye of the storm happens to make landfall,” DeSantis said. “In some areas there will be catastrophic flooding and life-threatening storm surge.”

The hurricane will probably make landfall along the southwest Florida coast between Wednesday and Thursday and the precise location could mean everything to Tampa, Douty said. A landfall north of Tampa Bay would slam the city with a flooding wall of water, while if Ian hits further south the worst could be felt in Sarasota and Fort Myers, with less surge for Tampa.

“Tampa may end up avoiding the worst-case scenario, but it looks like it is going to be pretty close,” Douty said. “By the time it is clear to determine where it is going to make landfall it will be too late to evacuate or make preparations.”

The storm will bring as much as 25 inches or rain across Florida, in addition to any surge pushed on shore, Douty said. About half of all hurricane fatalities come from flooding.

Tampa and the surrounding region has been preparing for the storm since Monday, with evacuation orders in place and a local utility warning that it may proactively cut power to some of downtown Tampa early Wednesday to avoid serious damage to its equipment from a storm surge.

Tampa International Airport will suspend operations at 5 p.m. Tuesday, and American Airlines Group Inc. issued a travel alert for 20 airports in the western Caribbean and Florida. More than 80% of Wednesday’s flights from Tampa have been canceled, according to FlightAware, an airline tracking company.

Florida fuel supplier Mansfield Energy Corp. raised its supply alert level to “code red” for the state, requiring a 72-hour notice of new deliveries as pre-storm demand strains supply, the company said in a note to customers. Some fuel terminals near Tampa are closing Tuesday morning, with more closures coming Wednesday, which means fuel deliveries will have to be made from more distant terminals.

Tampa tourist attraction Busch Gardens will close Tuesday and Wednesday, and the Tampa Bay Buccaneers National Football League team will use the practice facility of their cross-state rivals, the Miami Dolphins.

--With assistance from Jim Wyss and Chunzi Xu.