/sites/all/themes/penton_subtheme_wealthmanagement/images/logos/footer.png
Recent
Recent
Seven Tips to Help Financial Advisor Firms Protect Their Customer Lists
May 20, 2022
Nine Must Reads for the CRE Industry Today (May 20, 2022)
May 19, 2022
Dondero’s NexPoint Targets More Than $1 Billion for New Wager on Single-Family Rentals
May 19, 2022
SEC Judges’ Constitutional Cloud Darkens After Appeal Ruling
May 19, 2022
Featured
The 10 Best and 10 Worst States in Which to Retire in 2021
Jul 15, 2021
Poll: 15 Classic Books on Investing and the Markets
Apr 03, 2020
Fifteen Must-Listen Business Podcasts for Advisors
Aug 14, 2020
Celebrity Estates: Jay Leno and Planning for Classic Car Collections
Feb 22, 2022
Coronavirus
brought to you by 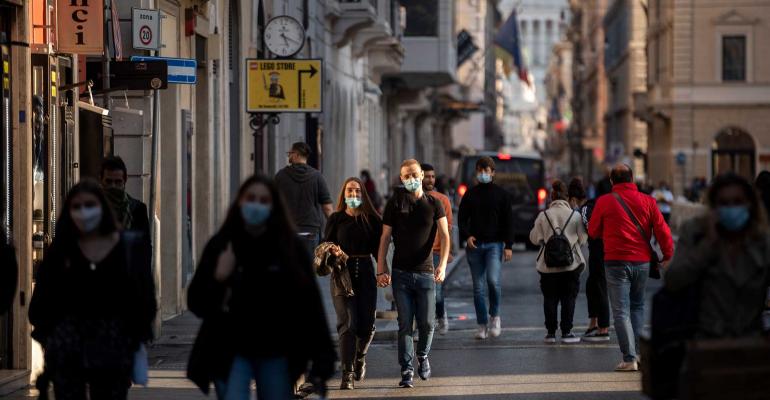 Leaders in European countries are urging pandemic-weary citizens to toe the line.

(Bloomberg) -- European nations are preparing tougher measures to contain the coronavirus as infections surge toward a “tipping point,” even as leaders express concerns that new restraints will decimate the region’s already fragile economy.

The continent has again emerged as a global hotspot, with countries from Spain to Ukraine posting record increases in recent days. Authorities are struggling to devise restrictions that slow the spread while not pushing the economy over the edge and sparking public unrest.

German Chancellor Angela Merkel will host a cabinet-level meeting on Monday to discuss new rules, such as testing in nursing homes and isolating travelers from risk areas. She warned on Friday that the country is reaching a watershed moment that will determine whether it regains or loses control of the disease.

Like other countries, Germany is focusing on local restrictions rather than a national lockdown. Merkel met with the mayors of Germany’s 11 biggest cities last week and agreed on common thresholds that would trigger stiffer curbs. She’ll discuss the next steps with state leaders on Wednesday.

Leaders in other countries are urging pandemic-weary citizens to toe the line. French Prime Minister Jean Castex implored people to adhere to hygiene and distancing rules to avoid another general lockdown.

“I’m not asking for anything revolutionary,” the premier said on France Info radio, warning of a “very strong” resurgence of Covid-19.

France added Toulouse and Montpellier to a list of cities placed on maximum alert, meaning bars, casinos and exhibitions will close while restaurants, cinemas and museums will have to abide by stricter health rules. Infections in the country surged by nearly 27,000 on Saturday.

Concerns for the economy were underscored Monday when Italy’s Saras SpA, the biggest oil refiner in the Mediterranean, agreed with unions to furlough all of its 1,378 workers through the first half of next year to mitigate the damage caused by the pandemic. The company plans to run its Sarroch refinery at a “technical minimum” level in October and November.

Prime Minister Giuseppe Conte is expected to order new measures targeting nightlife, social events and amateur sports, while urging companies to boost remote working. Under a decree that could be issued as early as Monday evening, bars and restaurants may have to close by midnight, and people could be prohibited from gathering outside between 9 p.m. and 6 a.m.

In the Czech Republic -- the European country with the worst outbreak per-capita -- the government plans to approve more stringent distancing rules. The steps under consideration include further curbs on outdoor gatherings, more limits on opening hours for restaurants and restrictions on alcohol sales.

Finance Minister Alena Schillerova said the measures will be an “improved version” of the quarantine regime from March, but not quite a lockdown.

Belgium’s 14-day incidence rose to 387 Covid-19 cases per 100,000 inhabitants, making the country the second-hardest hit in Europe. More than 10% of tests performed in the past week produced a positive result, the highest rate since late April.

In the U.K., Prime Minister Boris Johnson is set to announce a new system of alert levels that would see millions of Britons subject to more stringent curbs on their everyday lives. Deputy Chief Medical Officer Jonathan Van Tam on Saturday warned of a situation similar to before the nationwide lockdown began in March.

Poland is considering whether to introduce a state of emergency if cases start to clog up the health-care system, Dziennik Gazeta Prawna newspaper reported, citing unidentified people from the government. The move would allow authorities to allocate health-care workers in hospitals where they’re needed most amid concerns about staffing. The number of respirators in use in the country jumped more than 80% in the past week.

In Portugal, the virus’s spread for the first time reached the government’s inner circle, after Science Minister Manuel Heitor tested positive. Prime Minister Antonio Costa and other members of government who were tested last night had negative results.

--With assistance from Geraldine Amiel and Maciej Martewicz.