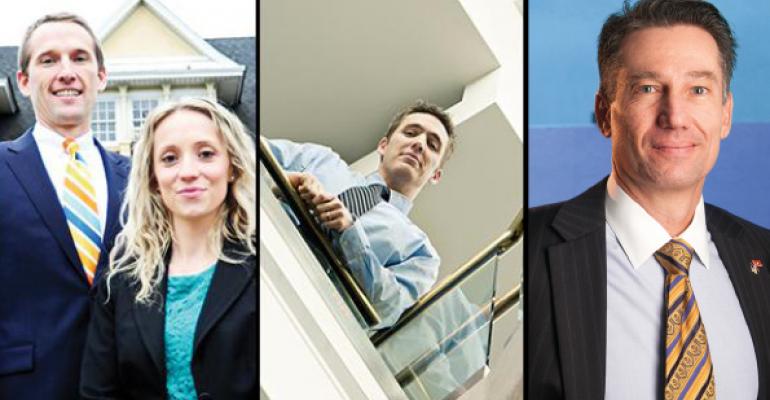 Where Are They Now?

Every few months, we profile an advisor struggling to overcome a practice management hurdle—anything from attracting wealthier clients to jumpstarting a fledgling business. Then a panel of three experts offers advice and tips.

Occasionally, we go back and see how some of these advisors have fared. We want to know if they followed the advice, if it helped and what their plans are for the future.

Here’s a look at three of them:

The background: Two years ago, Jim Parks of Parks Wealth Management in Ridgewood, N.J, was at a crossroads. He’d spent a long time looking for a junior associate to work with his clients, freeing him up to focus on getting new business. He’d finally hired a promising candidate with some institutional financial services experience named Ania Karcher (formerly Ania Bielicka). She started doing basic paperwork, scheduling meetings with clients and sending them information on their accounts, and taking notes in client meetings. A year later, the new hire had freed up a lot of Parks’ time, and clients liked her. But Karcher herself wasn’t sure she was ready, or even wanted, to take the next step to advisor. What should Parks do?

The advice: Philip Palaveev, now CEO of practice management consulting firm The Ensemble Practice, and Hellen Davis, president of coaching firm Indaba, urged Parks to be patient. It can take years before a newbie is ready to become a lead advisor, said Palaveev, and as long as there’s a basic interest in taking on the role, a slow training approach should do the trick. Chip Roame, managing principal of Tiburon Strategic Advisors, recommended thinking out of the box-, not only keeping Karcher in her current position, but also bringing another person on board to help with operations, freeing up Parks to focus even more on clients and new business.

The update: Parks decided to follow Roame’s advice, at least partially, and forget about pushing Karcher to assume a hands-on advisory role. “We have her do as much as possible, other than being the advisor making the recommendations,” he says. Her new duties include even more client communications and customer service, as well as running the firm’s social media campaigns and updating client data. According to Parks, Karcher’s role has helped him increase assets to $85 million, from $70 million about two years ago.

At the same time, Parks still is interested in finding a junior advisor. It just isn’t as pressing an issue as before.

New Kid on the Block

The background: In 2011, Brad Thurber, an advisor at D.A. Davidson, had recently moved his practice from his hometown (population 58,000) in Montana to Salt Lake City. He was the father of a four-year-old, and he and his wife were having twins. They figured they’d all benefit from being closer to his in-laws. To maintain his client relationships in Montana, he would return once a month, making the eight-hour drive and staying a week. But he also knew he needed to find a way to build a book in his new town, and his solution—courting attorneys and CPAs—was proving a lot harder in the big city.

The advice: Palaveev, Davis and Roame urged Thurber to focus more on his new territory than his former stomping grounds. Their suggestions ranged from seeking help from a D.A. Davidson branch manager, to selling his book in Montana and buying one in Salt Lake City. As for networking with attorneys and CPAs, there was a catch-22: The most effective route would be to meet professionals used by his clients, but he couldn’t do that until he’d found some clients. Patience was a requirement. “This is a relationship-driven business,” said Palaveev. “It can take as long as five years to get traction in a new market.”

The update: Thurber decided to keep his clients in Montana, although he now meets them every two to three months, communicating via email and phone when he’s not in the area. In fact, he’s found that route to be a lot more successful than he’d anticipated. “It gives them an incentive to see me when I’m in town and helps me structure my practice,” he says.

As for meeting CPAs and attorneys in Salt Lake City, Thurber has reached out to a couple of his local clients’ professional advisors, but that hasn’t reaped particularly promising results. He has, however, been able to find clients through networking with friends, neighbors and his in-laws. About 20 percent of his business is now from Salt Lake City.

His relationship-building has been somewhat constrained recently, since he became co-branch manager of the three offices in the area. He gets an override on the production of the 14 advisors there. “Overall, it’s worked out about as well as I could have expected,” says Thurber. Assets are about $80 million, up from $60 million in 2011.

Getting the Word Out

The background: We profiled Sachs last summer, shortly after he had started his own RIA, Miami-based Private Wealth Counsel, following four years working for another wealth management firm. His plan: Focus on charitable giving and estate planning. To that end, he wanted to establish himself as a “thought leader” and get the word out about some unusual approaches to these strategies, but wasn’t sure how to do that. A blog probably wouldn’t attract much attention and a public relations firm would be too pricey. What about LinkedIn or Facebook? Or perhaps finding development officers for philanthropic organizations willing to distribute his articles on the subject to donors?

The advice:  Our panel of experts included Palaveev and Davis, as well as Matt Lynch, principal of Tiburon Strategic Advisors. Their suggestions included tapping clients who had friends with a charitable focus, attending association meetings likely to attract professionals able to refer him to suitable clients, and creating relationships with non-profit organizations and co-branding his articles with them.

The update: Sachs ended up doing an about-face; he’d discuss his charitable giving approaches with clients, but not make them a focal point of the practice. Why? His clients were telling him they needed more advice around taxes and the repercussions of recent changes to the tax code, so that’s where he dug in and found his niche. “I find among high-net-worth clients, their focus is on, ‘How can I save money on my taxes and build a more efficient portfolio?’” says Sachs, who sees his role as fitting a “gray area” between advisors and CPAs.

In fact, he’s now guarding his articles carefully, using them as one-page leave-behinds for some clients. His marketing focus is on 20-minute podcasts with a variety of experts on issues related to wealth. His assets are about $10 million, up from $5 million in 2013, and he’s shooting for $30 million by the end of the year.