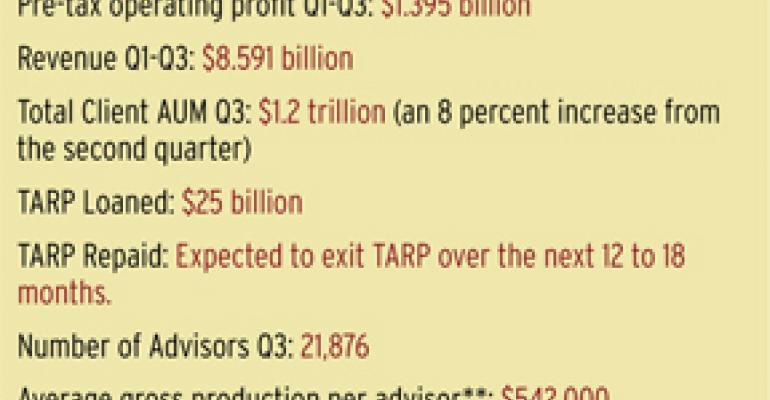 Wells Fargo Advisors FAs are in a house of pain. Indeed, one of its predecessor companies, Wachovia Securities, has been near the bottom of the heap in our Broker Report Card satisfaction survey for the last five years. This year was no different. The 193 FAs who completed our survey (22 percent of those queried) ranked the firm lowest in nearly every category. Its overall score of a 5.5 — an F — was lowest among all firms, save UBS, which had one hell of an annus horribilis of its own.

This is in contrast to legacy A.G. Edwards FAs, who displayed an ardor for their firm ranking only behind Edward Jones FAs in years past. Indeed, most legacy A.G Edwards FAs absolutely disliked its acquisition by Wells: “somewhat negative“ (32 percent) and “very negative“ (49 percent). Legacy Wachovia advisors viewed the recent marriage as positive (40 percent), or neutral (32 percent).

Here are some notable (if mostly unpleasant findings) from our 19th Annual Broker Report Card survey: 49 percent of its advisors have considered going independent over the last year; yet, 81 percent said they were very or somewhat likely to be working at their firm in two years; 46 percent said recent news coverage of their firm negatively affected their business; morale was also given an F rating, as were compensation, incentives and payout.

On the plus side, there were a few items that were graded a B, such as freedom from pressure to sell proprietary products, range in products offered, asset allocation programs and the quality of the sales assistants. Wells‘ CEO said recently that the average productivity of Wells reps has increased each quarter this year, ”with new financial advisors more productive on average than displaced advisors.“ Wells also scored high in FA retention.