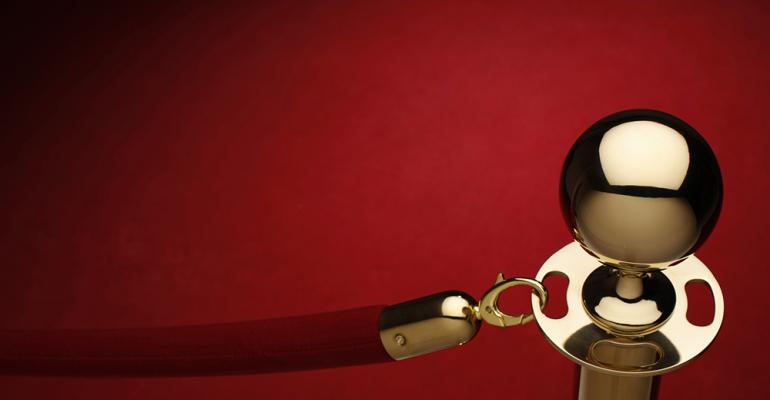 Want to Invest Like the Big Boys? No, You Don’t.

If someone offers to part the velvet ropes and grant you special access to “institutional quality” investment management, smile politely and head for the hills.

Here’s what to do if someone offers to make “institutional quality” investment management services available to you and your clients.  Hold on to your wallet or purse and run as fast as you can in the other direction.

In 1990, I was part of a group that launched the first TAMP to offer managed mutual fund portfolios to independent financial advisors. We described our services as “institutional quality” because we were using many of the same tools and techniques that we used to serve our institutional clients.  Back then, that meant we built globally diversified portfolios using Modern Portfolio Theory.  We preached the importance of asset allocation and portfolio optimization.  We used actual computers to run a disciplined manager due diligence process using quantitative and qualitative screens.  We produced highly analytical quarterly performance reports.  We even occasionally gained access to share classes that weren’t available to “retail” investors.

Sounds quaint now.  The investment world has been democratized in the last 30 years.  Advisors have incorporated all of this and more into their practices.  The term “institutional quality,” in the sense that we used it, has lost its meaning.  Now it’s just a marketing term.

Do You Really Want Institutional Quality?

Interest in “institutional quality” investment management was heightened 20 years ago when renowned investor, David Swensen, wrote Pioneering Portfolio Management.  In it, he described how he generated enviable returns as Chief Investment Officer of Yale’s endowment.

His approach became known as the “endowment model.”  It involved investing a significant portion of Yale’s endowment in alternative investments.  In studying his success, people focused more on the products he used than the process he employed to achieve his superior outcome.  Alternatives became associated with sophistication and “institutional quality.”

Financial services marketeers knew an opportunity when they saw it.  Soon “alts” of all shapes and sizes flooded the advisor marketplace.  Were they the same alts that David Swensen used?  No.  Were investments that were appropriate for institutions with an infinite life appropriate for high net worth investors?  Not necessarily.  But who wouldn’t want to invest like David?

Of course, we all want to be heroes to our clients.  But is trying to emulate David Swensen’s success in a different time and place the way to do that?  Is David Swensen’s past success even representative of “institutional quality?”  Do advisors already have access to different and perhaps better ways of achieving investment success for their clients?

Bottom line, do institutions have a meaningful advantage over you?  The research would suggest otherwise.  Here are some highlights.

Due, in part, to the popularity of the endowment model, Barber and Wang (2013) analyzed the returns earned by US educational endowments for the 21 years ending in June 2011.  First, they examined whether educational endowments provide any performance advantage relative to simple stock/bond benchmarks.  They concluded: “…we find no evidence that the average endowment is able to deliver alpha relative to public stock/bond benchmarks.”

Then they explored possible sources of alpha for the endowments.  They found, “little positive evidence supports the conclusion that private equity as an asset class is able to deliver alpha.” In contrast, they found “some evidence suggests that hedge funds can deliver alpha.”  But ultimately, they concluded, “We do not resolve the question of whether private equity and hedge funds deliver alpha.”  As to other sources of alpha they flatly stated, “We find no evidence that manager selection, market timing, and tactical asset allocation generate alpha.”

Dahiya and Yermack (2019) studied investment returns for thousands of endowment funds for the period 2009-2017.  They found that “Non-profit endowments badly underperform market benchmarks, with median annual returns 4.46 percentage points below a 60-40 mix of U.S. equity and Treasury bond indexes, and statistically significant alphas of -1.10% per year.”

In October 2019, Markov Processes published its annual performance review of the Ivy League endowments.  The news wasn’t good for the Ivies.  For the fiscal year 2019 all the Ivies, except Brown, underperformed the 9.9% return of a domestic 60/40 portfolio.  They averaged 6.7%.

What about David Swensen’s Yale endowment?  He delivered a disappointing 5.7% return, underperforming the average Ivy.

Just a bad year for the Ivies?  Well, not really.  The Markov study found that over the past decade, from fiscal year 2010 through fiscal year 2019, the average Ivy delivered a 10.3% return, slightly underperforming the 10.5% annualized return of the 60/40 portfolio.

David Swensen and the Yale endowment did outperform the 60/40 portfolio over the course of the past decade, but not by much—11.1% vs. 10.5% for the simple balanced portfolio.  Not a large advantage given the risks, costs, and illiquidity he took on to achieve it.

Ennis (2020) found that for the period 2009-2018, “A composite of large endowment funds underperformed a passive benchmark by an average of 1.6% per year, and a composite of public pension funds underperformed by 1%.”  To that he added, “alternative investments proved to be a serious drag on institutional fund performance during the study period.”

What About Those Alts?

Barber and Wang applied a simple two-factor stock/bond attribution model to the performance of the endowment funds they studied.  They found that the two-factor model explained 94% of the time-series variation in their returns.  By adding a third factor—international stocks—they were able to explain 99% of the time series variation in the returns.

Ennis reached similar conclusions.  He found that for the period 2009-2018, 99% of the performance of both endowments and public pension funds could be explained by an attribution model consisting only of public stock and bond indexes.

In other words, access to “institutional quality” investment products like alternatives added little diversification benefit.  This despite the fact that, according to Ennis, alternatives “account for nearly 30% of public fund assets and 60% of large educational endowments.”

Ennis also found that standard deviation of returns for the institutional composite and the passive benchmark “…are nearly identical. At 11.10% and 11.16%, which is to say there is no evidence of ‘volatility dampening’ in the return series of the alts-heavy composite.”

Why did alternatives work so well for Swensen and add so little value more recently?  Ennis explains this by examining alternative investments over different time periods.

During what he calls the “Golden Age of Alternative Investments” from 1994 to 2008, large endowments, on average, produced excess returns of “410 bps a year for 15 years.”  He attributes this stellar performance, in part, to the use of alternative investments.

As a result, Ennis says, “pricing in those markets became better aligned with public-market pricing, and those alternative markets became more efficient.”  This caused the institutional advantage to evaporate.

How About Those Fees?

Not surprisingly, Barber and Wang, Ennis and Markov all mention the relatively high fees paid by endowments as a factor in their underperformance.  A review of the Ennis research suggests that endowment underperformance can be almost entirely explained by fees.

This led Barber and Wang to conclude:

“The bad news is that the investment managers do not appear to share the fruits of their labor with those whose money they manage.  While managers appear to earn sufficient returns to cover their fees, there is no evidence that endowments—even the endowments of elite institutions—are able to beat benchmark returns.”

David Swensen, himself, said it more succinctly in describing the challenges facing institutions:

“Wall Street’s share of the pie defines the amount of the performance drag experienced by would-be market beaters.”

There may have been a time when “institutional quality” investment management would have provided you and your clients with some advantage.  It appears that time has passed.

Institutional clients have a unique set of problems that differ significantly from those of individual investors.  They speak a different language.  They are subject to different pressures.

It is far from clear, however, that institutions have access to investment options that produce better results than those to which you have access.  In fact, the evidence suggests that if you build elegantly simple, low cost portfolios for your clients using tools that are widely available, you can outperform the institutions and your clients will be better off in the long-term.

If someone offers to part the velvet ropes and grant you special access to “institutional quality” investment management, smile politely and head for the hills.

Scott MacKillop is CEO of First Ascent Asset Management. He is an ambassador for the Institute for the Fiduciary Standard and a 45-year veteran of the financial services industry.  He can be reached at [email protected]