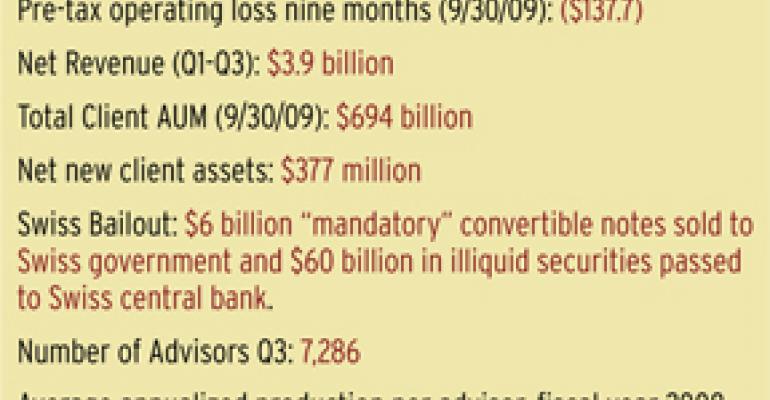 UBS, Is the Worst Over?

Is the worst over?

Financial advisors at UBS have been hoping for a big change for many months. At the end of October, they finally got it: in two words, Bob McCann. (See related story on page 34.) The 51 year-old former Merrill leader replaces Marten Hoekstra, 48, who took over as head of Wealth Management Americas (then called “U.S.”) in 2005.

McCann will have his work cut out for him. His new advisor force is one despondent bunch. They ranked their firm back in to the basement this year with an overall score of 5.9 (down from 6.0 last year). The lowest scores were not surprisingly given to public image (3.8) and morale (4.4). In addition, 81 percent of respondents said news about the firm had negatively affected their business. “The firm needs direction, badly” said one FA.

McCann's presence won't fix everything. But he's already ended the firm's recent practice of offering enormous upfront packages to new FAs, saying he wants talent to come to the firm but not for the money. Meanwhile, a lot of the existing talent has been leaving. According to FAs in the Chairman's Council, there has been very high turnover among the firm's top 200 FAs (which contribute 70 percent of revenue). Said one 20-year veteran: “Let's just say, I don't know anyone anymore.”

McCann's arrival also hasn't quelled rumors of a sale or spinoff, which many brokers still hope for. The Swiss have turned down fire-sale offers of $2 to $3 billion in the past two years, according to reports. Some brokers say McCann is likely here for as many years as it takes to get the unit's value up again for a sale or spinoff. “I think if there's no news in the next 12 months of a sale or spin-off, a lot more [FAs] will leave,” says one FA.