brought to you by
Practice Management Survey

Bernard Madoff’s astonishing fraud has accelerated calls for regulatory overhaul that had already begun with the credit crisis. then again, the regulatory system was antiquated. The real problem for retail financial advisors: Your clients no longer know who they can trust.

MIKE DELGASS, principal with Sontag Advisory, an RIA with $5.5 billion in client assets, is a Certified Financial Planner, a tax and estate attorney, and a specialist in asset protection and financial planning for businesses. Based in tony Westport, Conn., Delgass has 15 years of experience advising wealthy clients. Yet recently, and suddenly, some of Delgass' most loyal clients want to be reassured that they can trust him. That's tough to hear, says the 39-year old financial planner, who has a sterling compliance record.

But it's also an increasingly common occurence for RIA-affiliated advisors these days. Call it the “Madoff Effect.” In the wake of the scandalous news reports that broke December 12 about Bernard Madoff, once revered as a pioneer of electronic trading and a pillar of the community for his philanthropic largess, many financial advisors say clients are approaching them with greater suspicion. If a man of Madoff's stature could pull off a Ponzi scheme of such epic proportions, goes the logic, how can the advisor down the street be trusted? Since RIA advisors (or IARs) generally work for themselves or some local business without national name recognition, and since the SEC is seen to have been, in President Barack Obama's words, “asleep at the switch,” there is plenty of room for abuse, some clients reckon. “How do I know you aren't cheating me?” And, “Where exactly is my money held?” clients are asking these days. After all, from a skeptical client's point of view, RIAs merely hang up some credentials and fill out a Form ADV, and yet, in some cases, they have limited power of attorney to make investment decisions for clients without their explicit approval. Meanwhile, the state of the market certainly isn't helping to soothe client nerves: In 2008, most people — unless they were in cash, Treasuries or, perhaps, short the euro and long a dollar ETF — got crushed financially.

Nor does it help that since the Bernie Madoff scandal erupted, stories about the capture of financial fraudsters seem to be rapidly proliferating. In mid-January came the news of the “Sky Houdini,” an Indianapolis financial advisor who was caught by authorities in Florida after faking his own death in a private airplane crash. The fleeing FA's wealth management business had been under investigation after he allegedly scammed some clients and insurance companies. Only a few days prior, news broke of Joseph Forte, charged by the SEC with conducting a $50 million dollar Ponzi scheme — since 1995.

None of Delgass' clients lost money to Madoff. And Delgass himself is a very accomplished, straightforward and honest advisor with whom this magazine frequently speaks. But these are not normal times. The collapse of Wall Street securities firms and the alleged fraud of a once-legendary Wall Street icon have sent shockwaves through the investment community — even far-flung RIA advisory firms that have zero connection to the controversy and had never even heard of Madoff are feeling the fallout.

In general, clients are now more skeptical not just of their advisors, but of the investment managers they choose. “Anything illiquid or lacking transparency — hedge funds, say, or anything with a limited partnership structure that requires long-term investment commitments — is a no-go,” Delgass says. That goes for alternative asset managers with long, distinguished track records and even asset managers whom advisors know personally. Due diligence is now front and center. In fact, Delgass has been calling his clients, explaining how custody and clearing works to them and describing his due diligence procedures. He has even asked his separately managed account managers to call individual clients. “It's pretty clear there's been an erosion of trust,” he says.

Tom Berthel, CEO of Berthel Fisher, an independent b/d and RIA in Marion, Iowa, has noticed a definite increase in client calls. “A client will call to ask, ‘How do I know that the real estate agent in San Francisco who I sent my $200,000 check to really has a deal?’” he says. (Many Berthel Fisher affiliated FAs specialize in a variety of alternative products, including 1031/tenants-in-common exchanges, oil and gas limited partnerships and REITs.) “Our clients want to know where the assets are held. People never used to ask about that.”

Of course, Madoff is not the first supposedly upstanding member of the financial services community to mislead investors. But the losses are huge and spread far and wide, and the discovery of his alleged scheme comes at a time when trust in the financial services industry is at an all-time low. The effects may last for some time. “Unfortunately, I think investors who have invested their money with individual RIA advisors will be more apprehensive now,” says Winthrop Brown, a securities attorney with Milbank Tweed Hadley & McCloy in Washington D.C. “And that does a huge disservice to those who've built up a long history of trusted advice.”

A BULL MARKET FOR REGULATORS?

The funny thing is, despite all of the front-page-worthy financial fraud stories of late, SEC actions against RIAs and broker/dealers are not unusually high compared to prior years. (See table on page 24.)Yet, Brown and many others are worried about a potentially ill-conceived regulatory response to any flaws that are uncovered in the FBI's investigation of Madoff, as well as the official report of the SEC's Inspector General, David Kotz. Of course, in the court of public opinion, the jury has already read its verdict: Regulators, those entrusted to protect the investing public, are guilty. Guilty of not finding in their numerous examinations what many in the investment community suspected and what whistleblower Harry Markopolos had been telling them for years: Madoff Investment Securities was a fraud — probably a gigantic Ponzi scheme.

The SEC was already in the hot seat with Congress, economists and pundits for its perceived failures related to the credit crisis (in 2004, an SEC rule change doubled allowable leverage for five Wall Street firms). FINRA is also under scrutiny. Mary Schapiro, the new chairman of the SEC and a former CEO of FINRA, faces tough questions — not just about how she will conduct her future job, but about what happened at her old one as well, and why FINRA couldn't ferret out Madoff's schemes. Some say that under the current system, the relationship between regulators and the powerful influence peddlers on Wall Street is skewed against the regulators: They are paid poorly by comparison. They are overmatched. Others charge that there are systemic conflicts of interest — too many regulators curry favor with the executives and companies they regulate because they go on to take lucrative jobs in the private sector after they leave their regulatory positions.

In the end, most advisors are in for regulatory overhaul, whether it's new registration requirements, more compliance rules, more examinations and investigations or entirely new regulatory structures. Perhaps a single super regulator is next — FINRA and the SEC rolled into the Justice Department — or even a global financial police force. The realm of possibility is vast. President Barack Obama told an interviewer on CNBC on January 7: “Wall Street hasn't worked; our regulatory system hasn't worked … so it's going to be a substantial overhaul.” But is this just talk, or will it bring action? In the meantime, advisors have far more immediate and pressing concerns, namely, restoring their clients' trust in the system.

In the end, some think the Madoff effect may reverse the flow of clients and advisors from Wall Street's giant firms to the independent b/ds and RIAs that began as so many of the former teetered and nearly collapsed. (Note: Madoff — reluctantly — registered as an RIA in September 2006.) One of Smith Barney's top financial advisors, a 20-year-plus veteran with more than $1 billion in assets under management, recalls more than a few current and prospective clients crowing about Madoff's returns. These days he looks pretty smart when he tells clients why they didn't get burned by Madoff: Any strategy that isn't fully disclosed — anything that the advisor can't see, touch or understand — is automatically eliminated from consideration for his clients. (Full disclosure: Citi clients were not directly invested in any of Madoff's funds, but three of Citi's funds of funds had minor exposure, says a source close to the firm.)

Indeed, advisors from the national firms can point out to clients that because of their scale and resources, their firms have very robust due diligence systems in place: Advisors pick managers from an “approved list,” vetted by their firms' research analysts. The Smith Barney FA thinks this gives him a marketing opportunity. “I will certainly point out to [client] prospects the battalion of attorneys that watch over us as well as the rooms of analysts that work here,” he says. Citi employs 80 long-only research analysts and another 65 analysts who cover hedge funds and funds of funds. “That's a lot of layers of due diligence to rely on,” he says.

Not surprisingly, RIAs don't think the pitch will work. They're equally confident that the big boys have lost their place in the sun and that Madoff's two-year stint as an RIA isn't going to change that.“Ten years ago, the big money would probably first go to Goldman Sachs, then maybe Merrill Lynch, then on down. That has changed,” says Chandler Taylor, one of 27 principals with the Moneta Group, a St. Louis-based RIA with just under $10 billion in client assets. He scoffs at suggestions that brokers will be able to leverage the Madoff news, especially given that Wall Street firms had to be rescued by other banks and the government.

Moneta may not have legions of attorneys, but it has a stalwart compliance department, which consists of a chief compliance officer, four research analysts who investigate managers, an in-house counsel and an outside counsel. So he's not worried about his due diligence. “All the disclosures are there, the transparency,” he says. “We also know where the manager lives,” says Taylor with a laugh. 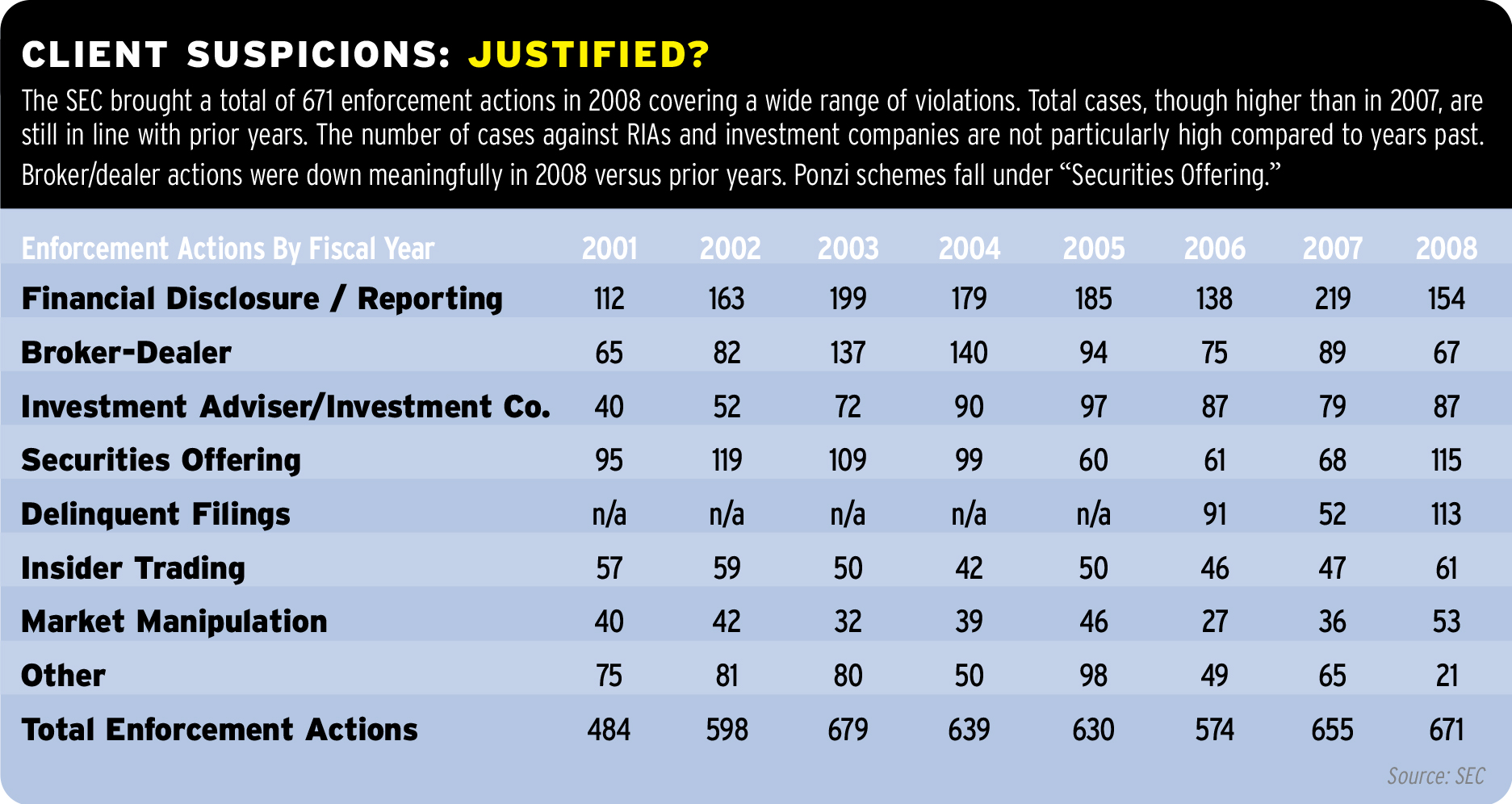