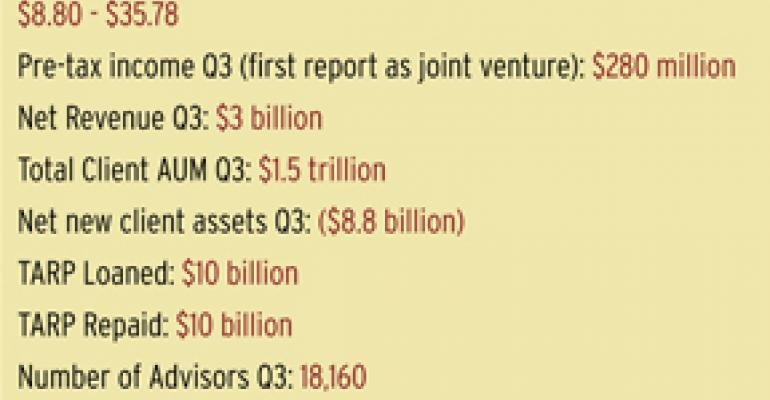 Most Morgan Stanley Smith Barney advisors are still taking a wait-and-see attitude toward the merger. Some former Smith Barney reps have been complaining that they are being pressured to sell Morgan Stanley products. “The merger with Morgan Stanley is going to be challenging in many ways, and I want to see how things go,” says one Smith Barney respondent when asked if he plans on staying at the firm. But another rep, who says he's very likely to stay with the firm, remarks, “We're the best house in a bad neighborhood.”

The joint venture closed six months ago on May 31, but much of the dust was still settling in October, when the firm finalized the selection of managers to run its branches and complexes across the country. (Information for this survey was collected during that period.) MSSB has since made a few moves to keep advisors happy. Not long after squaring away the BOM and complex directors' organization, the firm announced its new compensation plan and opted to stick with Smith Barney's higher payout rates for top producing advisors. The grid, which goes into effect in January, also lowers the cutoff for penalty box payouts.

“Morgan Stanley is very focused on being the biggest firm out there,” says one wirehouse recruiter on the east coast. “Management keeps reinforcing that 18,000 number.“ Indeed, less than a month after its payout announcement, MSSB came out swinging with recruiting deals of 330 percent, following Merrill's lead. “It's a serious deal. Offering a deal like this means [Morgan Stanley Smith Barney] is looking for the best advisors on the Street to join them,” says another east coast recruiter.