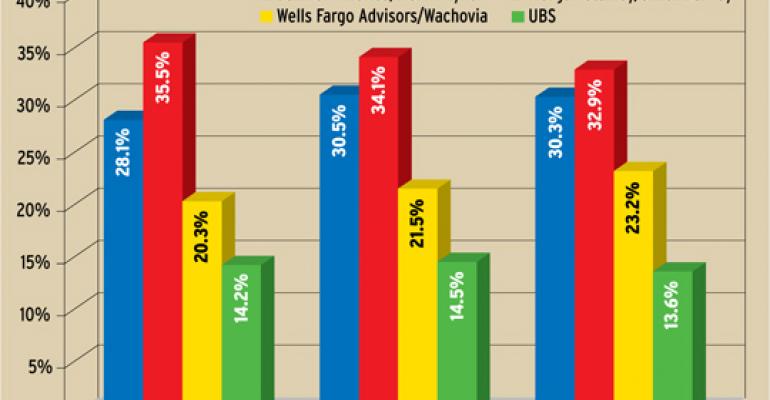 Morgan Stanley Smith Barney and Merrill Lynch are neck and neck for the No. 1 spot among wirehouses.

Morgan Stanley Smith Barney and Merrill Lynch are neck and neck for the No. 1 spot among wirehouses. MSSB has greater market share, with 33 percent of total client assets at the wirehouses at year-end 2009, versus 30 percent for Merrill. (Wells Fargo Advisors has 23 percent and UBS, 14 percent.) Morgan Stanley Smith Barney also has far more financial advisors. But Merrill has the lead in technology and assets per advisor, according to Aite Group research. It's impossible to know who will come out ahead. “Morgan Stanley is creating a new merged platform, which is likely to involve compromises, and compromises breed dissatisfaction,” write Alois Pirker and Douglas Danemiller, authors of “New Realities in Wealth Management,” a report issued in April, 2010. “Merrill Lynch, on the other hand, is operationally intact; their change involves prioritization of opportunities, gaining efficiencies through in-sourcing such as securities clearing, and maintaining the positive aspects of the Merrill Lynch brand while assimilating the firm into the Bank of America organization.”