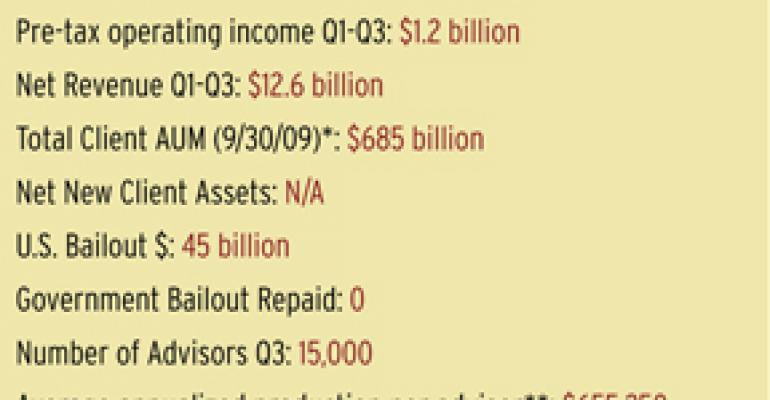 Merrill Lynch advisors are usually a pretty happy lot, and that has not changed with the firm's acquisition by Bank of America, which closed on January 1. Respondents still feel they work for the top firm on Wall Street: indeed, 78 percent of Merrill respondents said Merrill was the best wirehouse to work for, putting it behind only Edward Jones, which has ranked number one for years. In addition, 86 percent of Merrill advisors said they are likely to be working at Merrill within two years, higher than the number for any other firm except, again, Ed Jones.

“Despite the BofA acquisition, our operating platform is second to none,” said one Merrill advisor. “You have all of the tools that you need to serve your clients.” Another advisor noted that the BofA acquisition has actually given him a leg up. “I still believe Merrill Lynch is a great place to work, and being together with BofA just adds to the arsenal.”

Perhaps recent complaints from some Merrill advisors that they were feeling pressured to sell Bank of America banking products reflected the opinions of a minority. In fact, Merrill received one its highest ratings of 8.8 in the category “freedom from pressure to sell proprietary products.” Despite its heft and success, Merrill is still aggressively recruiting FA talent. In October, it began offering unprecedented recruiting deals of around 330 percent in upfront cash and back-end growth incentives to top quintile producers. (Morgan Stanley Smith Barney quickly got wind of it and rolled out a similar deal.)

There are a few more hurdles to clear, of course. The firm needs to find a new CEO for the bank to replace Ken Lewis, who may, in the end, be reinstated. But then, advisors are less interested in executive management than day-to-day support. In that department, Merrill is doing all right.