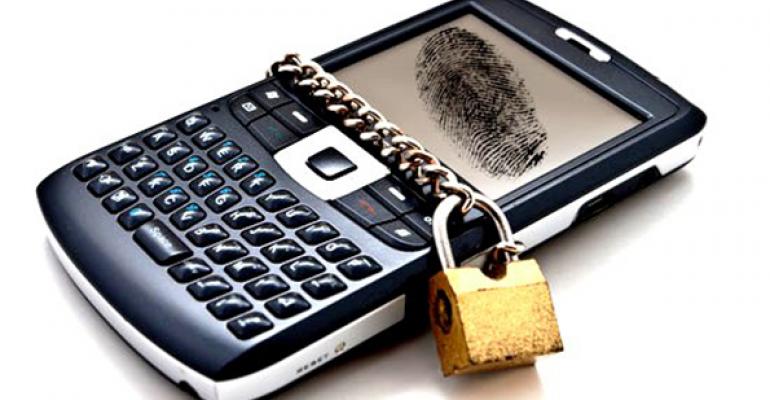 Security has gone mobile, with software, services and apps that can do everything from wipe a device if it&rsquo;s stolen to making it practically shout for help if lost &nbsp; One-hundred thirteen phones are lost or stolen every minute in the United States &nbsp; Rogue viruses can infect a phone from an app or a web site, mining data and passwords and sending them to outside servers &nbsp; Having some way to either locate a phone, or protect the data running across these mobile machines is as much a business requirement as a credit card

Whether it is for convenience, control or simply a lack of other options, many reps are increasingly using their personal phones and tablets for business. That potentially puts a lot of sensitive client data into small devices that can be stolen, left in a cab or on a restaurant table, or otherwise misplaced; not everyone who finds such devices is vigilant about returning them.

So locking down that data — even the device — is crucial. Luckily, security has gone mobile, with software, services and apps that can do everything from wipe a device if it’s stolen to making it practically shout for help if lost.

“Over half of users that we surveyed said they’d prefer to lose their wallet over their smart phone.” says Lianne Caetano, director of mobility product marketing at McAfee in Santa Clara, Ca. “As content builds up, smart phones become more valuable.”

Caetano notes that 113 phones are lost or stolen every minute in the United States, and it’s hard to find anyone who hasn’t had that experience. But losing a device in the early mobile days when a cell phone carried perhaps a short stream of contacts, is a far cry from today’s tablet loaded with documents, apps that login to personal networks, or client information.

Being able to track a phone, wipe and restore, and then lock that device is necessary — something McAfee, for example, can easily handle through its WaveSecure product, even plotting a phone’s location on a map through its SIM card.

Sometimes thieves can steal the data right off your phone without even touching it. Rogue viruses can infect a phone from an app or a web site, mining data and passwords and sending them to outside servers.

“Some viruses can read SMS,” says Dave Kim, senior product manager for Norton Mobile Security in Mountain View, Ca. “If you’re talking about a client, that could in theory be tracked.”

Most computer web browsers, such as Chrome, identify web sites potentially infected with malicious code and alert a user not to click. That isn’t standard on mobile phone browsers. Mobile-based users need something different, says Kim.

Norton offers a Lite version of its Mobile Security product for free which scans an app as soon as it’s installed to check for anything amiss, while also offering the usual fare such as locking a phone remotely if it’s missing.

For the full version, at $29.99 a year, users can direct their phone to scream even if it’s on mute — potentially enough to scare off a thief, but best for locating a phone temporarily lost in the couch cushions. Web cam-enabled devices can also be told to snap pictures, which are then uploaded to Norton’s site for a visual on the location of that lost tablet.

How about locking out eavesdropping bugs? One nasty piece of Android malware, Nickispy.C, spotted last fall, recorded phone calls and sent them to a remote server.

Not fond of that scenario? Try NetQin, which scans a device and alerts users if spy ware has been uploaded to capture calls. (And that doesn’t always have to be a ‘bad’ guy, as anyone can buy spying software today and load it up on say, a loved one’s phone.)

There are even options for those who think it’s too late — they had planned to install a security program, forgot, and lost their phone. Plan B from Lookout can be remotely installed after a phone’s already gone, and then send the phone’s location to a Gmail address — all for free.

With more reps leaning on their personal devices for 24/7 access to information, clients, and the home office, having some way to either locate a phone, or protect the data running across these mobile machines is as much a business requirement as a credit card. Maybe even more.

Also, be sure to check out Lauren Barack's Q&A: Using Videos to Go Viral.